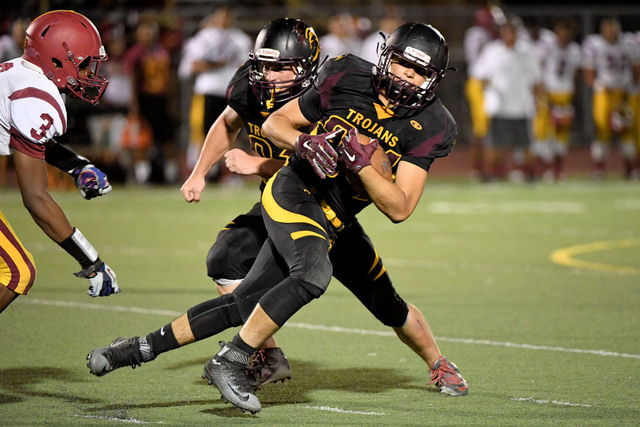 Peter Davis / Special to the Pahrump Valley Times Nico Velasquez runs the ball against Del Sol. The Trojans hope to be able to run the ball on the ground this week at Boulder City.

The Trojans travel to Boulder City on Friday at 7 p.m. and hope to turn things around and regroup after their 14-11 loss to Del Sol last Friday.

Pahrump (1-1 overall Sunset League) will try to return to the run success they had against Eldorado and run the ball against the Eagles, according to Trojans coach Joe Clayton. Look for Nico Velasquez and Aaron Fuentes to get the ball a lot.

The Trojans had five turnovers during that game, so against Boulder City (1-1 overall, Sunrise League) ball security will be paramount.

According to senior Trojans quarterback Parker Hart, Clayton talked about ball security and other things at practice.

“He said we need to execute better on offense,” Hart said. “Our timing was off last week and we were not executing our blocks.”

The Trojans defense against Del Sol looked good stopping the run. Based on highlight footage, the Pahrump front four was penetrating the Del Sol line.

Despite the loss, Hart said his team is up for the game against the Eagles.

“We are excited,” he said on Wednesday. “We had a great three days of practice, and we will be ready.”

Prediction: Look for the Trojans to run big against the Eagles for the win, 21-10.

The Eagles run a spread offense that showed its running game last week.

Their top running back is Aaron Walker, who had 15 carries for 85 yards against Lake Mead. Brian Foster was the next back with five carries for 52 yards.

The Eagles’ quarterback is senior Taylor Hatchel, six-foot, three inches, and 215 pounds, who had five attempts for 20 yards against Lake Mead.

Against Sunrise Mountain (1-1 overall, Sunset League), Boulder City had problems running the ball with 40-yards rushing but against Lake Mead, a Class 2A team (much smaller school) they ran for 249 yards. Look for Boulder City to try and run on Pahrump. Thus far, the Eagles have had no success passing the ball.