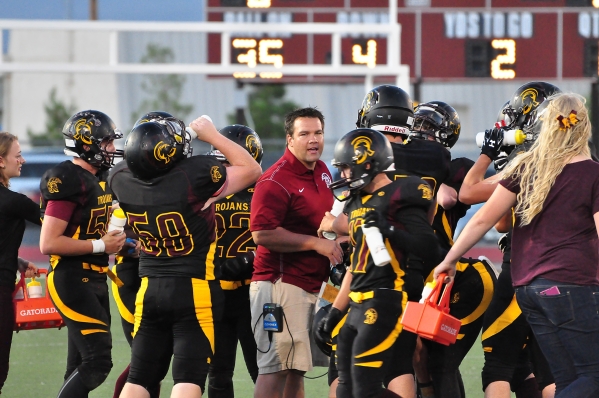 The Trojans football program will be looking to fill the head coaching spot again as first-year coach Adam Gent will be moving on. Under Gent the Trojans were 3-6 overall, 2-5 Sunset League.

On Monday Gent wrote a letter to Pahrump Valley, addressing it “Dearest Pahrump Valley Football Fans.” In the letter he expresses how hard it was to leave this town.

“The last month has been a tough one, as I have been trying to decide if I should take an opportunity that recently presented itself,” he said. “Though it is a great opportunity to advance my coaching career, it wasn’t an easy decision because of the special things happening with our football program.”

He then complimented the kids in the football program.

“These are great young men, and the future of Pahrump Valley football is bright as they continue to work,” Gent said. “I still believe this program is like a gold mine, that can strike it big in the years to come. A lot of young players throughout our community have caught “the football bug” and now they just need to keep building.”

Gent said it was exciting working with the young men of Pahrump and thanked the principal, the administration and community for all their support.

“There are so many who have been great,” he said. “I will always have a love for this program and this community. The best is yet to come!”

Gent didn’t say where he was going, but in a personal email said he was offered an entry level coaching position with a university.

On Monday afternoon, he had a meeting with all the football players after school, where he said his goodbye.

Trojans Athletic Director Ed Kirkwood said the school was saddened by the loss of Gent.

“We thank him for his hard work in keeping Trojan football going in a successful direction during his short stay with us,” he said. “We wish him luck in all of his future football endeavors.”

Kirkwood said the school will be searching immediately for a new coach from within the district and outside.