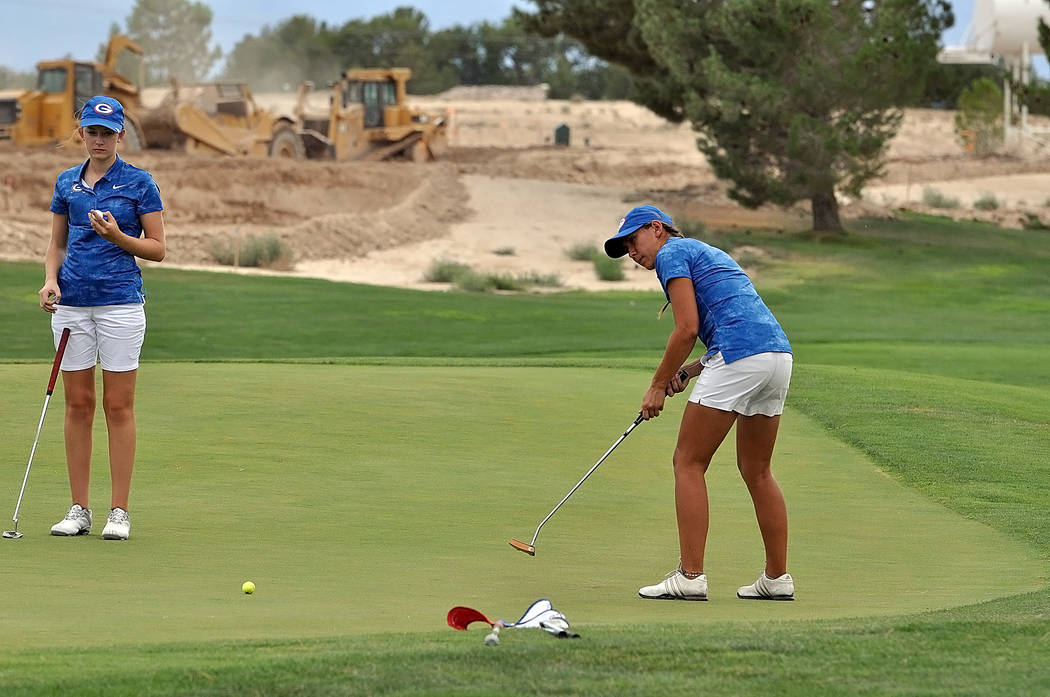 Horace Langford Jr./Pahrump Valley Times The Trojans golf team went up against Bishop Gorman’s Hunter Pate, who is seen putting. Pahrump Valley held their own, scoring a 387, to the Gaels’ 328. Pate shot a 2-over-par 74 against Pahrump. 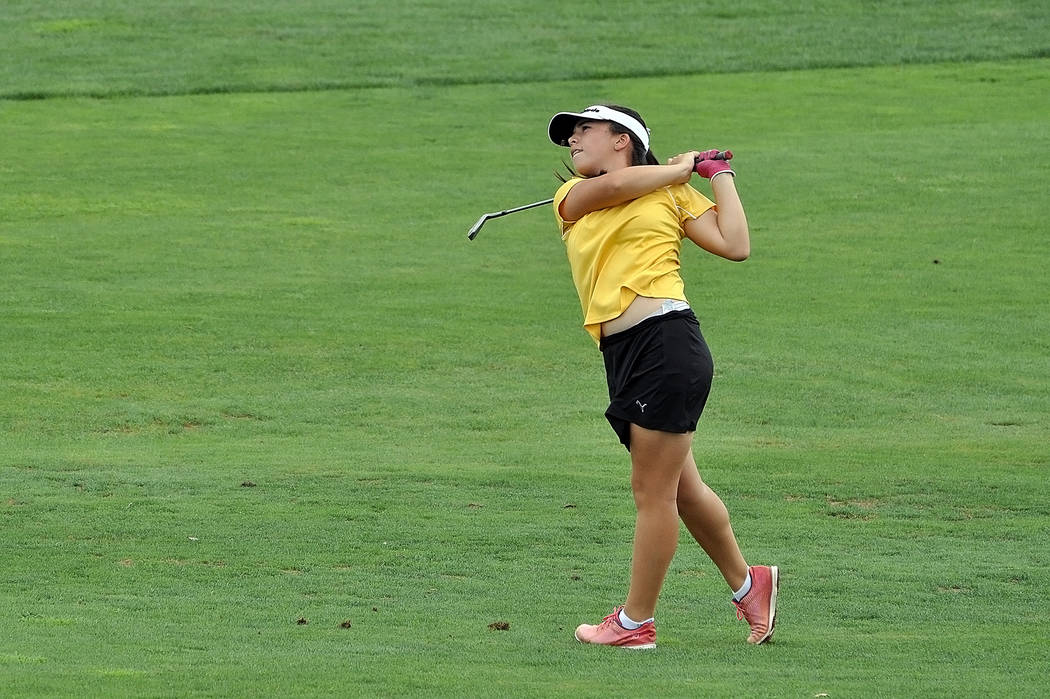 Horace Langford Jr./Pahrump Valley Times Freshman Breanne Nygaard as seen on the fairway at Mountain Falls when the team went up against Bishop Gorman on Wednesday. Nygaard posted a 12-above-par 84. 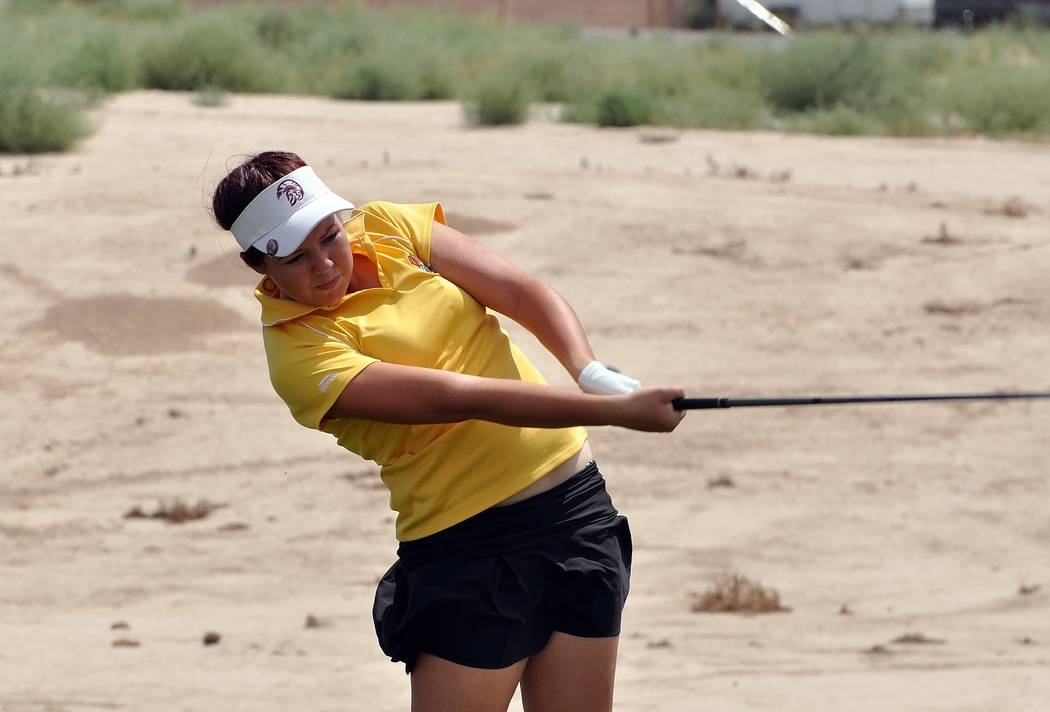 Horace Langford Jr./Pahrump Valley Times Makalea Petrie made this bunker shot look easy on hole two. She shot her best round of golf, a 15-over-par 87 against Bishop Gorman at Mountain Falls last week. 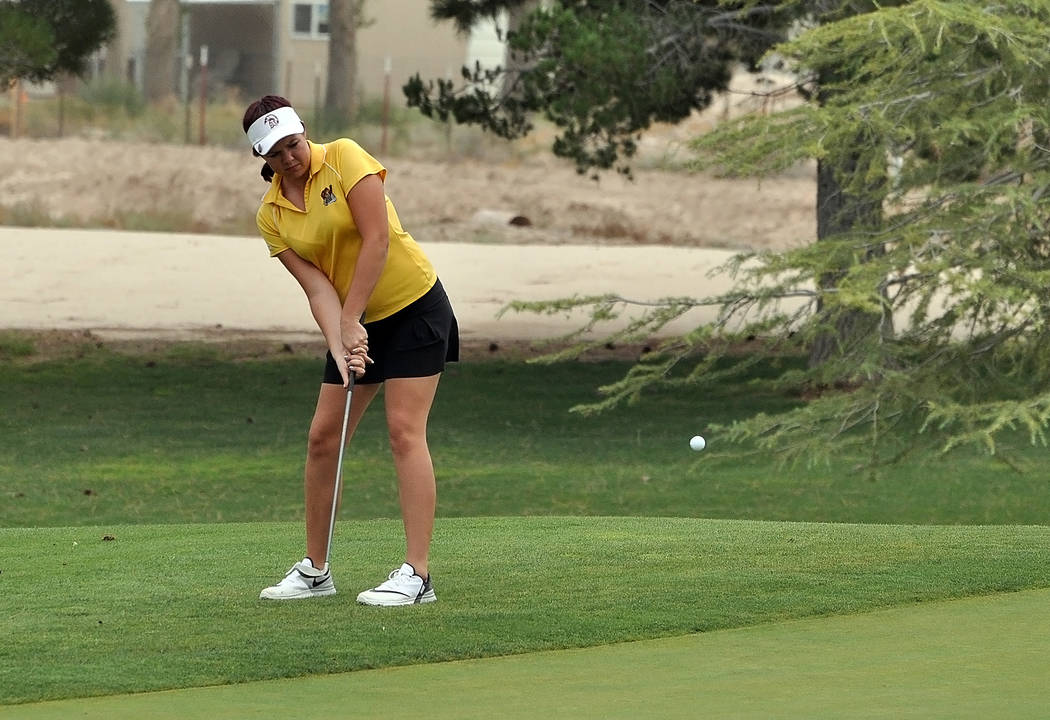 Horace Langford Jr./Pahrump Valley Times Junior Makalea Petrie’s short game was looking great against Bishop Gorman last Wednesday as she is seen here chipping the ball onto the green. This ball landed right in front of the pin. 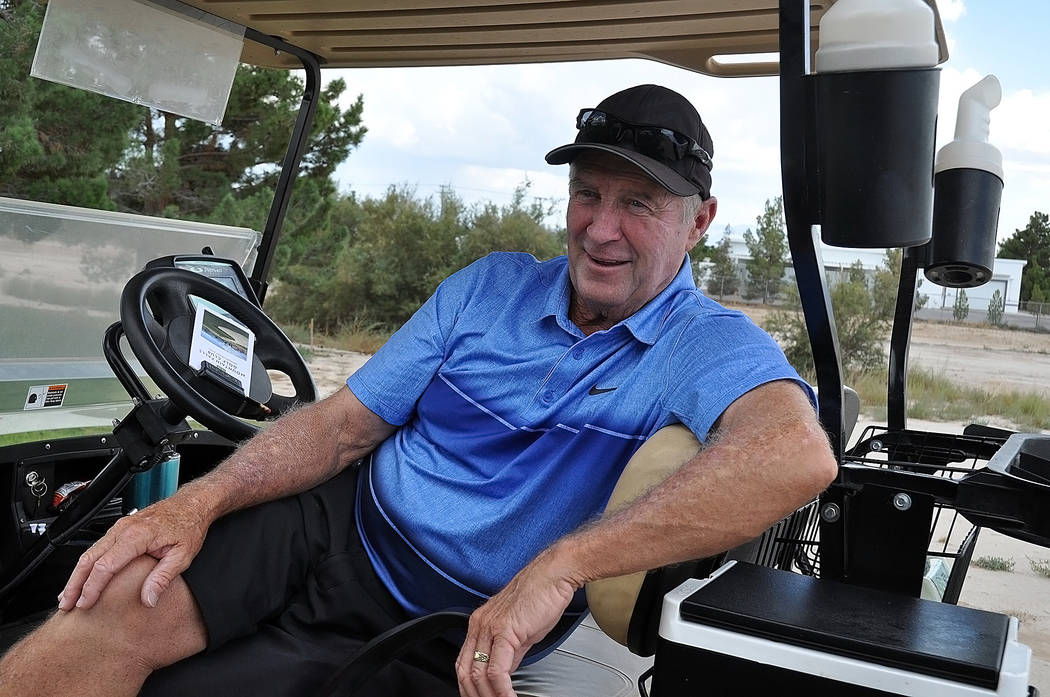 Pahrump Valley High School girls golf has only three girls returning to this year’s team but despite the low amount of veterans, the golf coach feels the team will do fine.

“I think our team will be fine,” Trojans coach Bob Hopkins said. “We have (freshman) Breanne Nygaard coming up. That makes us better. It is making everyone better. Desirae (Hembree) is our only senior and she did well last year.”

Add the freshman experience of junior Makalea Petrie, and the team is shaping up.

With that in mind, the Trojans went up against a team loaded with talent, Bishop Gorman, on Wednesday at Mountain Falls Golf Course. Bishop Gorman was led by a nationally-ranked prep golfer, Hunter Pate and Pahrump held their own.

Pate won the 14-15-year-old division at the inaugural Drive, Chip and Putt Championship at Augusta National in 2014 and she finished fourth in the Class 4A state tourney last year.

Against Gorman, Nygaard shot a 12-above-par 84.

“She said she struggled with making putts and her short game in general,” the coach said.

The team used senior Desirae Hembree’s score, who shot a 107, and junior Jessica Pearson’s 109 score, for a team total of 387.

Bishop Gorman came out on top that day, posting a team score of 328.

“That was to be expected when you have a girl like Hunter Pate, who shot a 2-over-par 74,” Hopkins said. “Their team had four girls shooting in the 80s.”

But when you combine Nygaard’s 84 score with Petrie’s 87, the team gets a respectable score against the Gaels.

Hopkins’ core returning golfers, Petrie, Pearson and Hembree, should give the team the experience they need to make it to state.

“I think we are ready for the season,” she said. “We have a newcomer McKayla Bartley. For being a newcomer to golf, she hit a 150-foot drive. She has just been playing for a week. I am shooting in the 80s and I am feeling good, the short game is improving.”

In last week’s match against Bishop Gorman, the 87 was her all-time best.

“Petrie has improved a lot,” Hopkins said. “Playing with Breanne has helped her a lot.”

Desirae Hembree discussed the weaknesses of the team.

“The short game is a really big weakness, like putting and stuff like that,” she said. “We need to keep on practicing and getting better. I am shooting high 90s and hopefully, I can get it (her score) into the 80s.”

During the first seven holes though, Petrie made the short game count. She was pitching and chipping shots that last year she normally hit over the green. Last week her short game was coming around.

“We saw some bright spots out of our younger players, like Furman and (Ashliegh) Murphy.”

Furman was excited to be on the team.

“It is definitely different in a good way being on this team,” she said. “I feel like I have to work harder and everyone is really supportive.”

Hopkins said playing on his team is all about growth.

The team went head-to-head with Boulder City on Tuesday. Those scores will be posted in Friday’s paper.