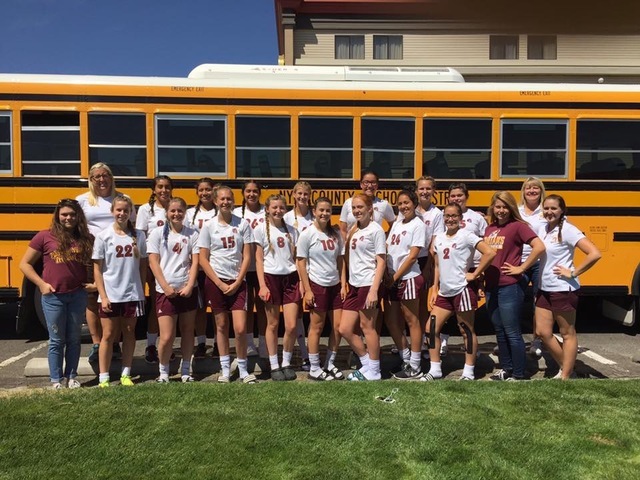 According to Trojans coach Julie Carrington, the Trojans’ top scorer was not at the tournament, but the girls still did well.

“I am very happy with the second-place position from the Spring Creek Tournament,” the coach said. “We played without three varsity players, Sydney, Vaniah, and Halie Souza. We moved Kaitlyn Carrington to the attacking mid-position and she was very helpful since that was a position she played previously in her soccer career.”

Carrington pointed out that the school Pahrump (5-3 overall, Sunset League) played for the tourney championship, Coronado, was a Class 4A school, which is a bigger school. She said her defensive squad also deserved some credit for the second place.

“I also have a strong defensive line with Alyvia, Madeline, Kathleen, and Autumn,” she said.

The Trojans girls soccer team beat Churchill County 2-1 in their first game of the tourney on Friday. In that game, junior Makenzie Lunetto and Hannah McElheny scored a goal apiece.

Then on Saturday, the team played Elko, beating them 1-0 with Kaitlyn Carrington scoring the only goal.

On Tuesday the Trojans traveled to Moapa Valley (1-3 overall, Sunrise League) in non-conference action and beat the Pirates 6-4. Sofia Castro led the team with three goals, followed by junior Sydney Dennis with two goals and Grace Gundacker with one goal.

Then on Wednesday, the girls traveled to Desert Oasis (4-2 overall, Southwest League, Class 4A) and lost 6-1 with Grace Gundacker scoring the solo goal.

The Trojans are off until next Wednesday, where they will host Boulder City (1-0, Sunrise League) before starting conference play and hosting Sunrise Mountain (0-1 overall, Sunset League) on Sept. 19 at 3 p.m.