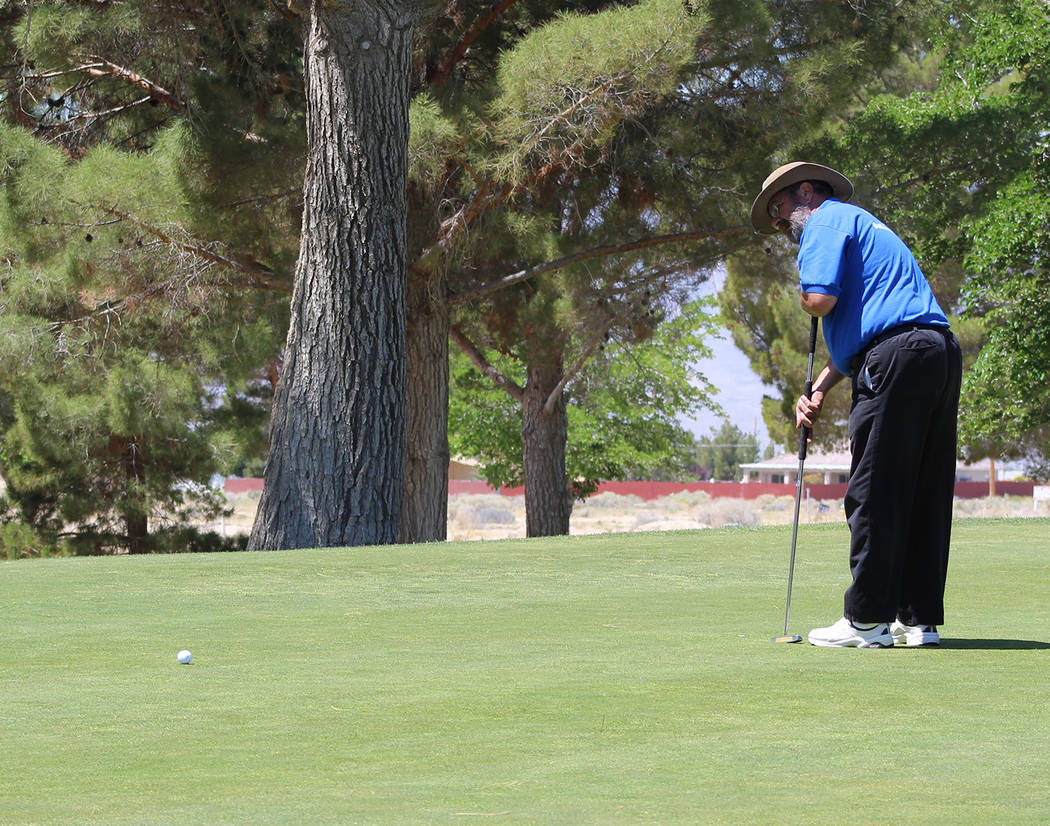 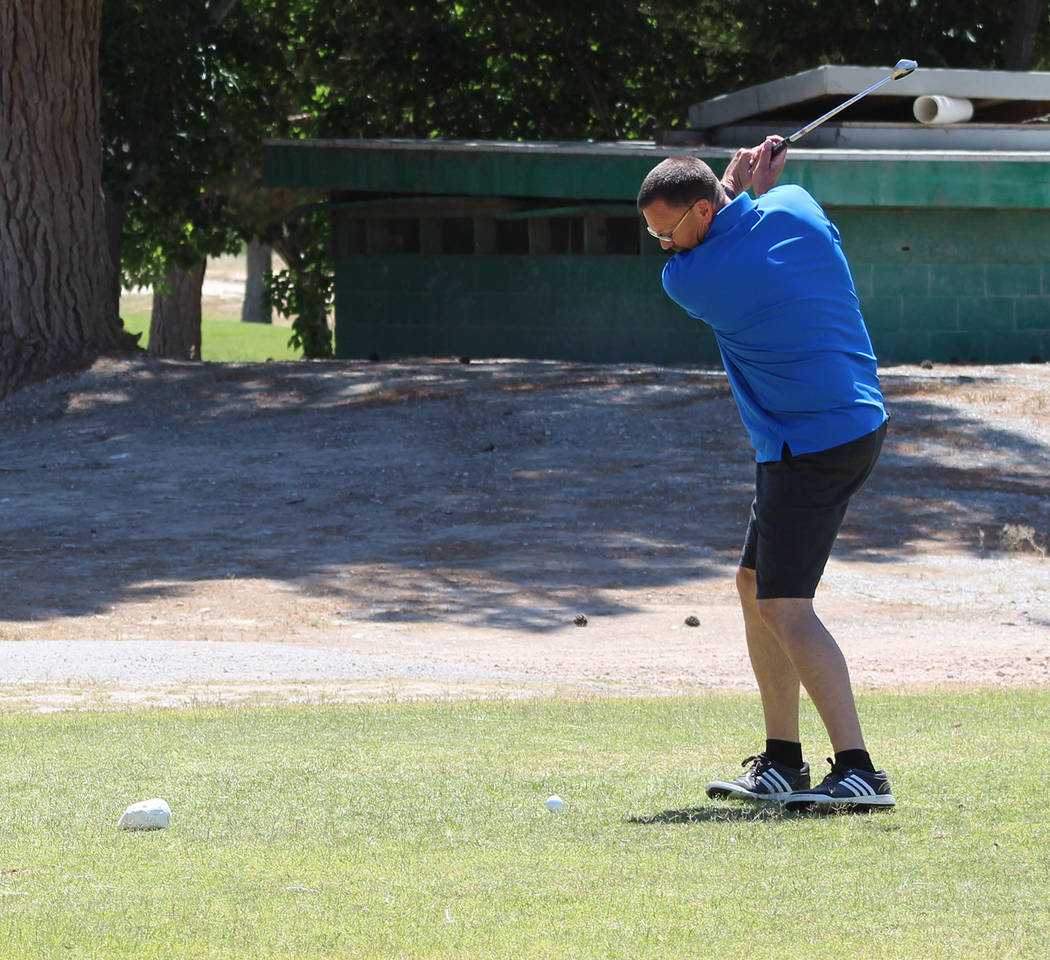 Tom Rysinski/Pahrump Valley Times Tony Carlo of Nevada Realty tees off on No. 10 during a fundraising tournament Saturday at Lakeview Executive Golf Course in Pahrump.

Any skepticism about the town of Pahrump’s purchase of Lakeview Executive Golf Course was nowhere to be seen as the course held a fundraiser Saturday.

“There’s a lot of things we need, but specifically we’re trying to put this money aside for a cart barn,” said Nye County Commissioner Dan Schinhofen, an ardent proponent of the purchase. “It’s going to be a lot more than we raise today.”

But the course is off to a good start. The four-person scramble format drew 18 teams, with an entry fee of $25.

“I didn’t play well, but we had a good day because we filled up the course and we brought in some money,” Schinhofen said.

Schinhofen and Tony Carlo of Nevada Realty were the driving forces behind the fundraiser.

“Tony and I were looking for a tournament to play in for May and we couldn’t find one, and then this (the purchase) went through, so we said let’s do a tournament here,” Schinhofen explained.

“I’m just an avid golfer and Nevada Realty, we’re a local company, and we like to sponsor things,” said Carlo, who judged the fundraiser a big success. “We just wanted to bring in as many people as we possibly could and show off the course.”

Schinhofen and Carlo consider the course an asset to Pahrump. With 13 par 3s and five par 4s, the course will draw a different clientele than Mountain Falls Golf Course a few miles away, they agreed.

“With Mountain Falls as a championship course and this as an executive course, we cover everybody,” Schinhofen said. “They do not compete with each other. They are different animals.”

“I think it’s a real positive because, as you know, Pahrump has a big population of seniors,” Carlo said. “We have a lot of parks for children, but we don’t have a lot of activities for seniors. Mountain Falls is a little bit too challenging of a course, and this makes it easier for the young and the old. And you can get around in two, maybe three hours.”

Aside from the entry fee, organizers held a raffle to raise more money. Ticket sales were brisk as the foursomes reported their scores.

“Tony Carlo supplied the gift cards, the fireworks were supplied by Red Apple, Area 51 and Blackjack Fireworks, and I donated a gift basket,” Schinhofen said.

It will take more than one fundraiser to get the course in optimum condition, but Schinhofen feels that after an initial investment the course will be a financial benefit to Pahrump.

“I’m confident this will support itself,” he said. “It may need a little help from the room tax money. We have 2 percent in the airport fund, we want to put 1 percent here, which will be about $100,000 a year to help keep it running, and the other will go to the fairgrounds. We’re hoping to collapse that airport fund and move the money over here to do the immediate improvements that need to be done, and by next spring, this should be a pristine course. That’s the way I see it.”

What Carlo and Schinhofen also see is a facility that can cater to the beginning golfer as well as the senior golfer, which has helped create positive feedback.

“I’ve gotten a lot more positive than negative,” Schinhofen said. “There are a couple of people that still don’t understand municipal courses are normal. But going forward I’ve had a lot of positive feedback, and again this is good for juniors and seniors and anybody in between.

“Today was more than raising money. It was just to say, ‘You know what? It’s your course. Come out and see it. We’ve improved on it.’”

“I think it’s good for the community, and I think we can have junior golf coming out here, too, as well as our seniors,” Carlo said. “What better place to start than a small course where you can keep your hopes up?”

Schinhofen said that the restoring greens is right up with carts and a cart barn as top priorities. But the course is already attracting attention from the community.

“We’re going to have a tournament for Search and Rescue in September,” he said. “By then, we’ll be fully up and we’ll have golf carts.”

The tournament ended in a three-way tie with scores of 53, forcing the toughest-hole tiebreaker. In that scenario, scorecards are compared and the lowest score on the course’s toughest hole is declared the winner.

On Saturday, it went to the third-toughest hole before the foursome of Ron Becker, Maria Becker, Marvin Olsen and Carole Olsen was declared the winner, getting gift certificates to Lakeview as their prize.