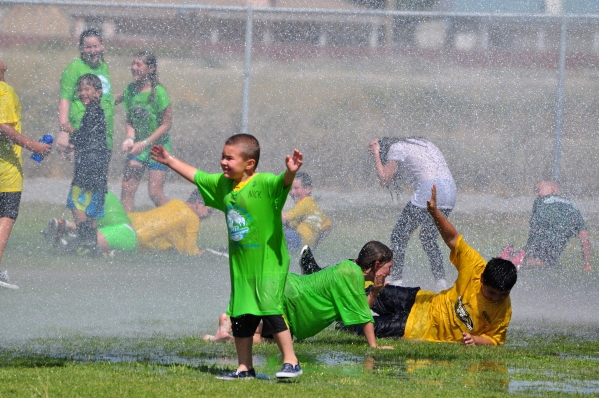 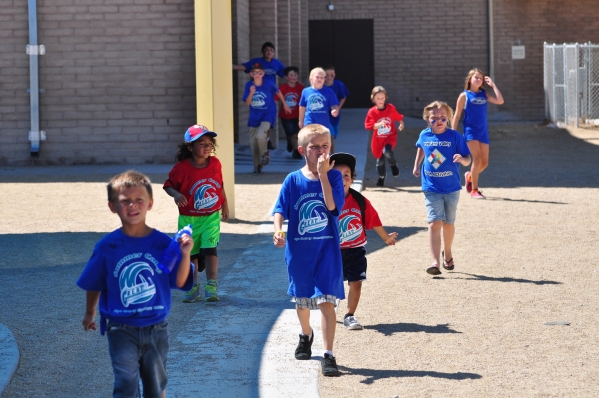 The annual GREAT Games ran last week at J.G. Johnson Elementary School with close to 200 kids from all over the valley.

The GREAT Games have entertained youth in Pahrump for the past 18 years. GREAT stands for Gang Resistance Education and Training.

All last week kids gathered in the morning from 8:30 a.m. until 1 p.m. and played games and heard lessons on gang resistance from the two deputies. The kids were divided up into teams and the games involved everything from eggs to relay races and a lot of water.

The officers teamed up for the second year with the Pahrump Valley Youth Activities summer program, which is a program that provides summertime education and recreation for Pahrump children.

GREAT started earlier this year due to the Nye County School District schedule change that has schools starting Aug. 10.

The games were saved in the late spring from budget cuts by Sheriff Sharon Wehrly, who said as long as she is sheriff the games will be safe. But that doesnât mean the worst is over, for Fernandes still is unsure of the program’s future.

“We just don’t know the status,”Fernandes said. “I think we will be good for the upcoming year. Round Mountain Gold said they will lend us a hand if need be and I am certain they will. This summerâs program was really successful. We had a lot of new games and the kids had a good time.”

Fernandes also thanked all the organizations that helped the program out.

The NyE Community Coalition was another program that helped out by providing high school student volunteers.

Leanne Kaiwi was a volunteer from the coalition and is best known at the high school for her softball skills. She played on the varsity softball team last year. She said the coalition was helping her out with job training.

“I love working with kids and it was worth coming out here,” Kaiwi said. “I helped with the kids in the classroom and I got to get attacked by the kids with water hoses.”

Nik Clark was also out there volunteering with the coalition and is a three-sport athlete for the Trojans, playing football, basketball and track.

Clark said he loves working with the kids too.

He said he enjoyed working with his team.

“The kids are like family and they treated me like family,” Clark said. “And of course my team was out to win and that made it fun.”

The GREAT Games are held throughout Nye County with events earlier this summer in the northern part of the county, Tonopah and Beatty.