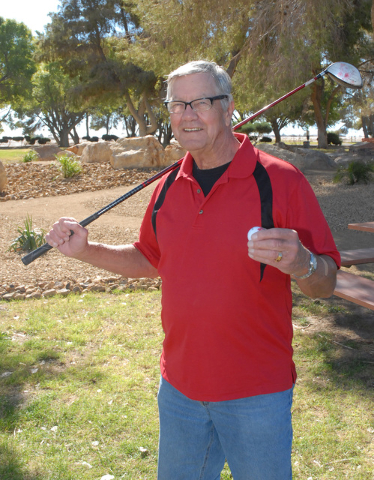 On Sept. 8 at age 77, Jim Fahey hit his first hole-in-one — ever at Lakeview Executive course, which brought him to the Pahrump Valley Times. Normally a hole-in-one does not justify a whole article, but something was different about Fahey. Perhaps it was his age, or the fact he reminds people of their dad. Whatever the reason the story came out and it started off with an incredible hole-in-one ball.

Well, as luck will have it Fahey just seems like he is full of it. He may simply go down as one of the luckiest men in the world.

Fahey was born in 1936 and became an orphan. He was raised in orphanages up until high school, but his luck kicked and he had a talent for football, and he is even in the Gilroy Hall of Fame. He got a scholarship to college because he was an all-American football player out of high school and received a college scholarship to play for Cal Poly Pomona.

Fahey by his own admission never felt lucky. Orphans probably really never do, but when asked how he got into a college he said it was by the grace of a town. “The town of Gilroy adopted me,” he said. “They helped raise me and get me to college and I guess I was just too scared to fail.”

He graduated in 1956 and was drafted into the army but missed the Korean and the Vietnam War. After the army he then went to college and played football. This is where the real luck comes in.

In 1960 his team flew to Toledo Ohio to play Bowling Green. Nobody really remembers who won that game, but after the game the team flew out of Toledo. It was a foggy day and Fahey recalls that day as he boarded the chartered Arctic-Pacific plane. “I hated planes to begin with,” he said.

“When I got on the plane it was all foggy and there was zero visibility. I said, ‘We can’t get on this plane.’ and they just said we had to. So I got on. The pilot came on board and he was talking to this guy, Don Adams, who was the world Champion boxer and football player.

“As the pilot leaned over to talk, I could smell that he reeked of whisky and he was the pilot. Don was sitting next to me and I told him, ‘Don this guy has been drinking booze.’ and he said to me, ‘That will just relax him more.’ I fastened my safety belt. I did not know it at the time but I picked the lucky seat in the back because I wanted to get away from the pilot.”

The plane rolled off the runway and climbed to about 100 feet and then came down with a crash. There were around 44 members of the team on the plane. The team lost 16 players, four others perished but Fahey was one of 22 survivors with minor contusions and bruises. The tragedy was felt all over the country.

“I survived the plane crash and ended up rescuing several people,” Fahey said. “The tale section broke off and we were upside down, but I did not know that. The fire was all around us and I told Don we had to get out of there. He told me he could not move. I unfastened his belt and he landed on his head and it took half his scalp off and I blame myself for that for the rest of my life.”

His friend Don survived the crash. The team was famous as if they had won the national title. Life Magazine did a story on them. Fahey said John Madden, the famous Raider Coach was supposed to be on the plane. He was a student coach, but was given a scouting assignment and missed the plane. Now you know why he always takes the bus to this day.

Another player, Ted Tolner, survived and he became the coach of the USC Trojans and the Rams.

Fahey’s luck continues to this day. His good friend Tom Ray of 13 years and also a Pahrump resident does not call it luck, but attributes Fahey’s good fortune to God. Both Fahey and Ray are strong Christians.

“He is a very friendly and outgoing person. Everyone calls him “coach”, because he did that once. He is a dedicated Christian and some would call him lucky, but others call it a blessing from God. He just seems to keep on being blessed. This year his wife was diagnosed with liver cancer and then it disappeared — gone,” said Ray.

Suzanne, his wife, met Jim in 1985. She says Jim is blessed too. “We were both widowed and I wanted to meet a strong man. I needed help with that. I was cautious. We met at a church picnic and it was a chance meeting. He is a strong man. As a boxer he never lost a fight. His coach would tell me that Jim would go down, but he would always come up,” Suzanne said.

Fahey said the anniversary of the plane crash is just around the corner. It was on Halloween. He said to this day he hates Halloween.

Back to the hole-in-one, Fahey said he milked it as long as he could. He hit the ball and never saw it land. They looked for the ball for a long time and finally someone checked the hole and found his ball.

“I am going to keep milking this hole-in-one. I have guys sending me cards. I knocked out guys in the boxing ring and nothing, but this thing I am still getting cards almost three months later. I have never experienced this before. I never believed someone would get so excited about a hole-in-one,” he explained.