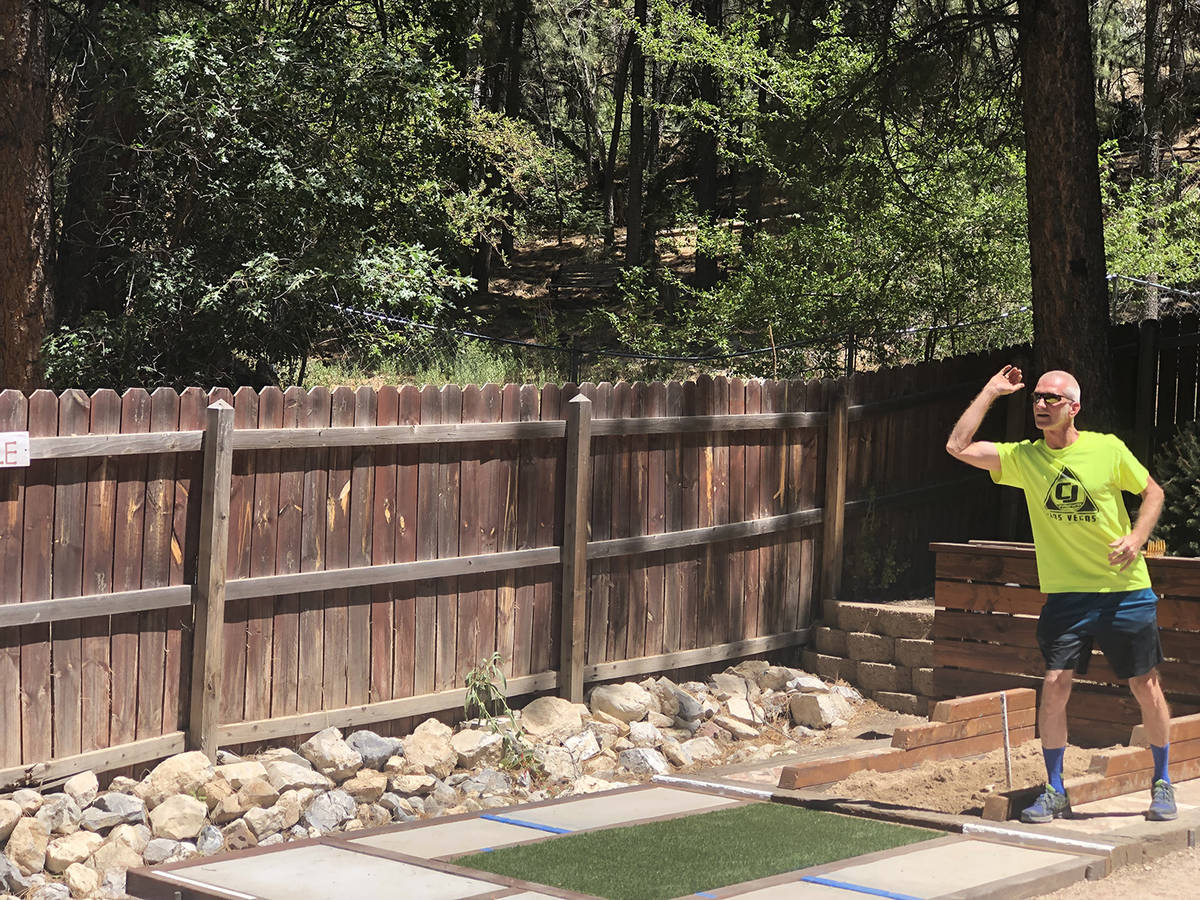 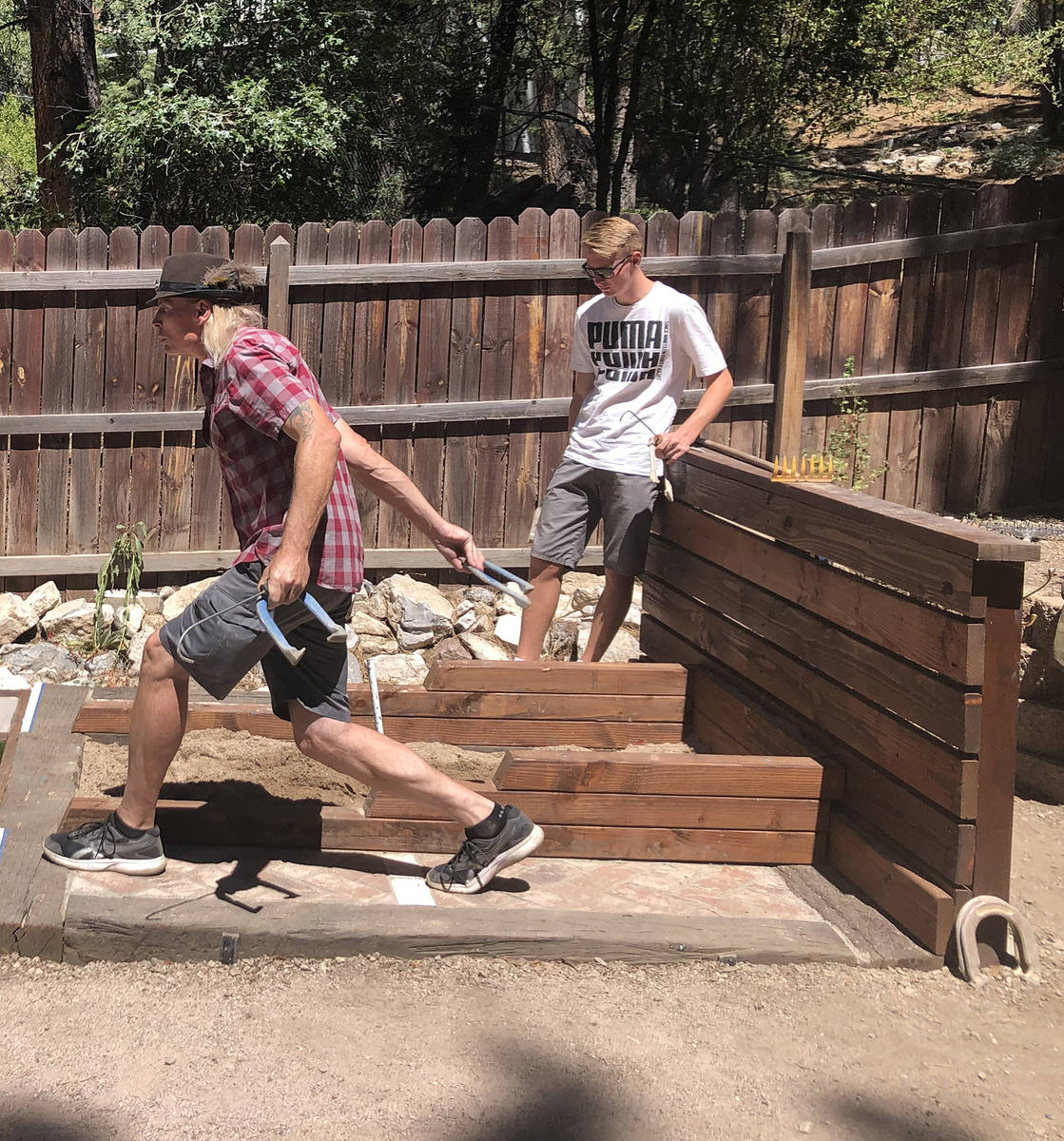 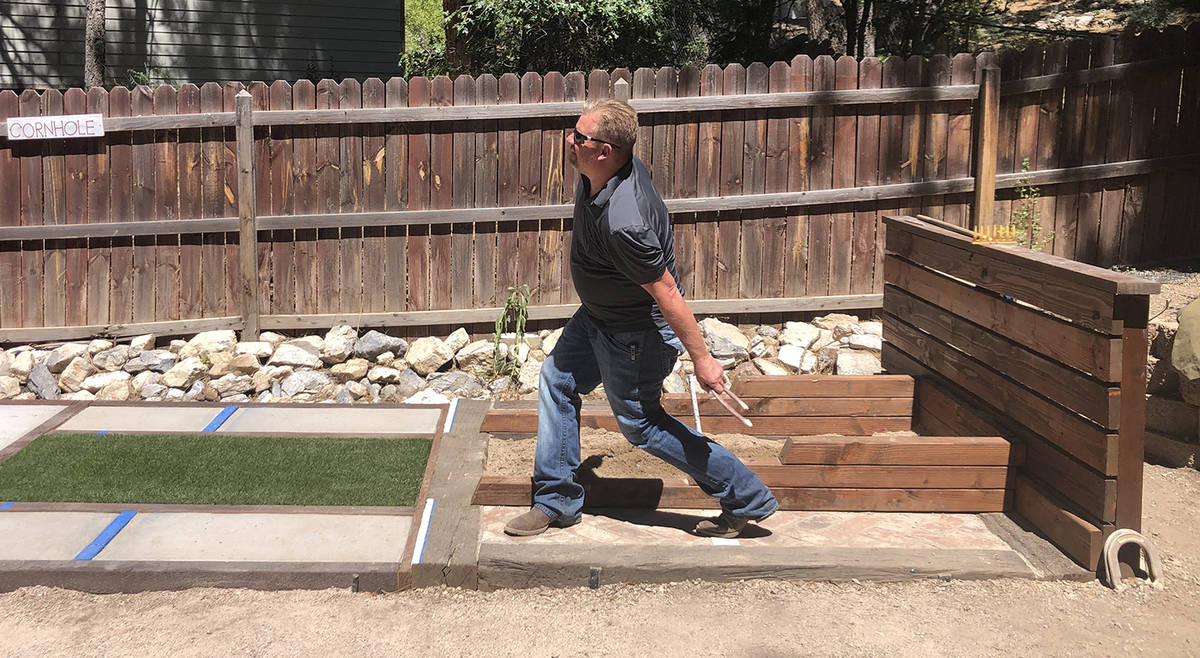 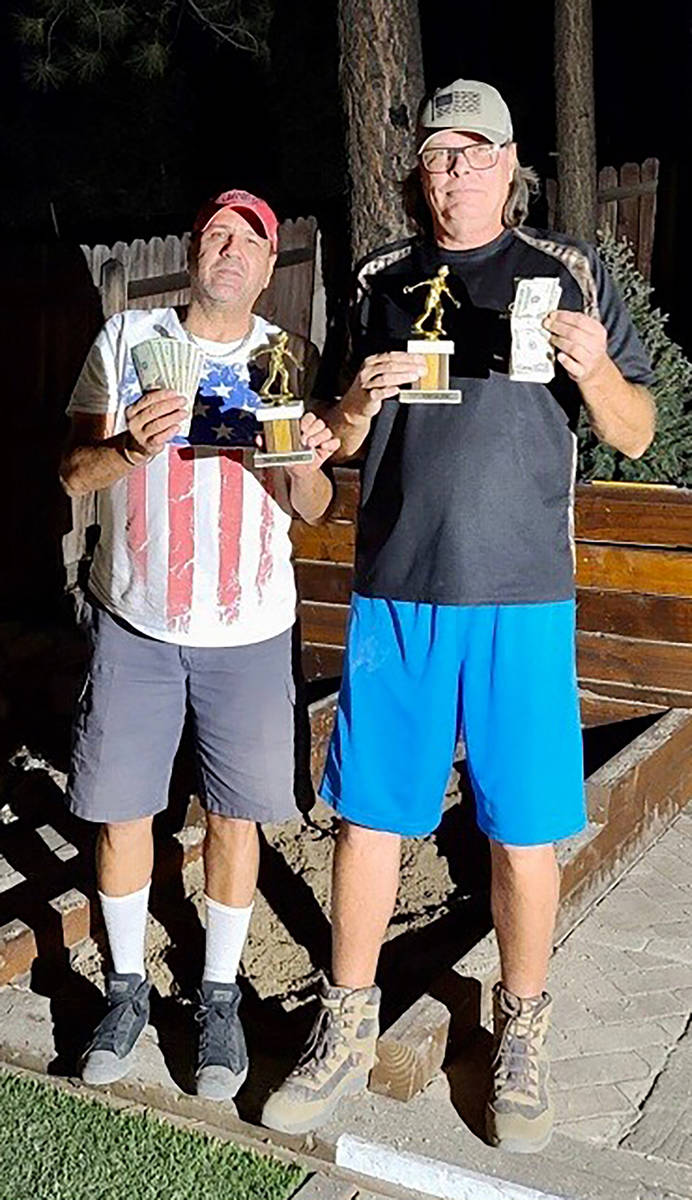 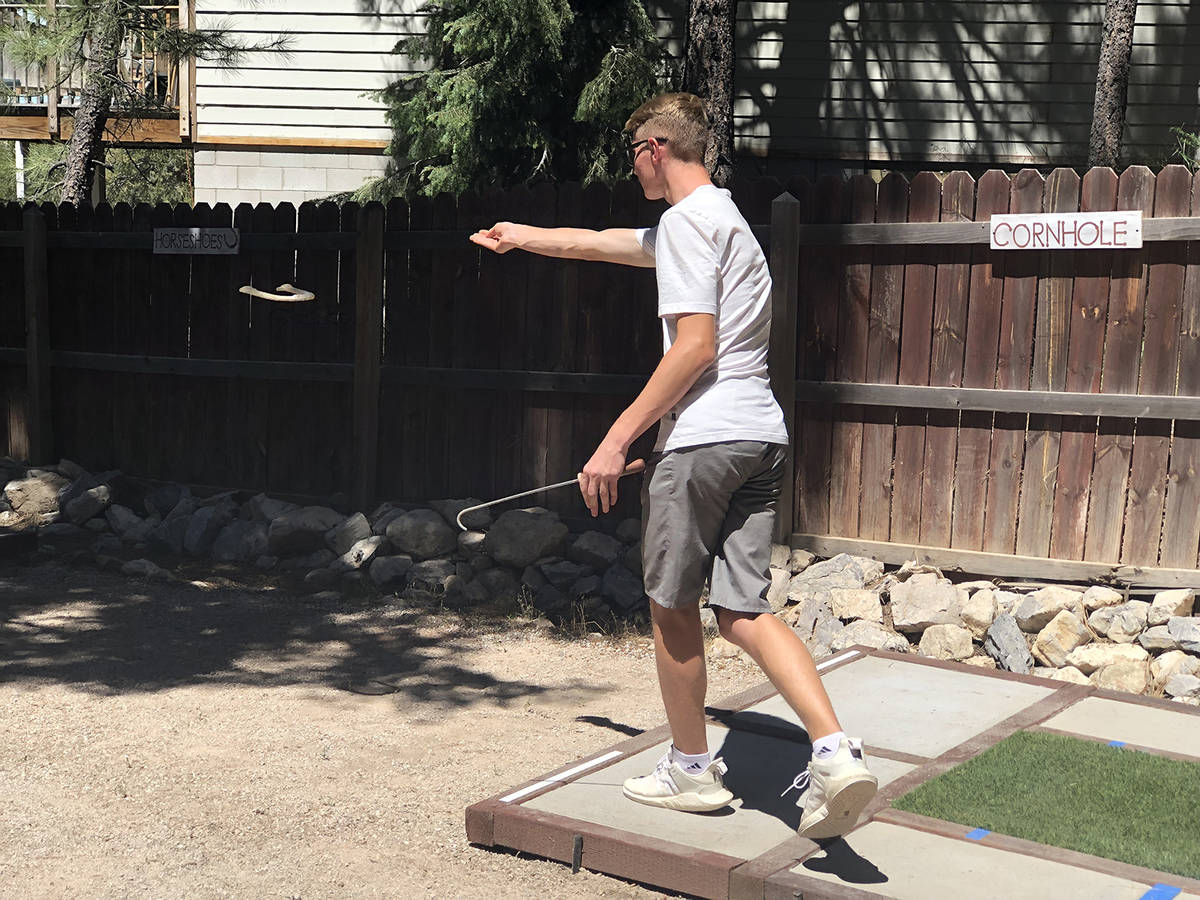 Tom Rysinski/Pahrump Valley Times Kasey Dilger, who teamed with Lee Fikstad to finish second after a three-way tie of pairs with 5-3 records was broken, pitches during Gary's Mountain Open. 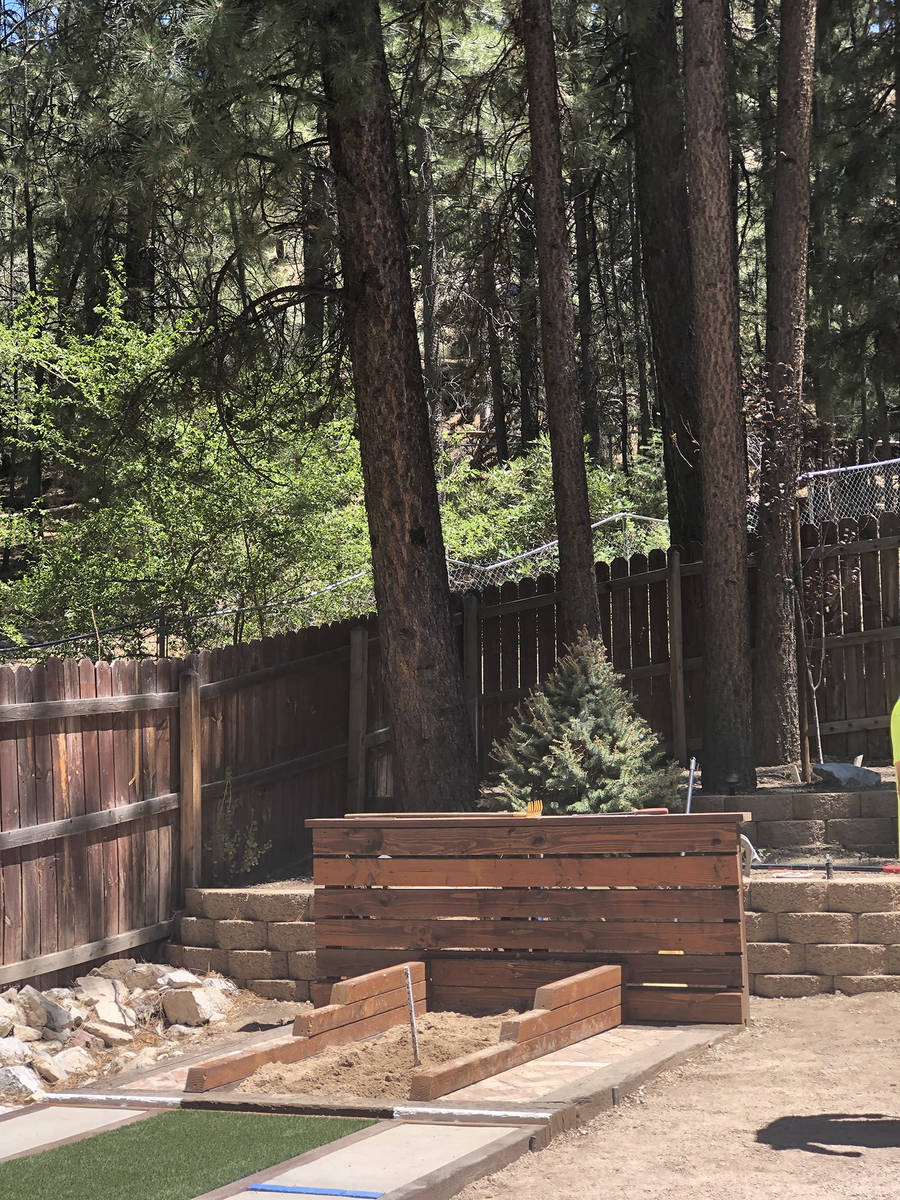 Pitching horseshoes above 7,000 feet is not like playing baseball at Denver’s Coors Field.

Sure, quality food and a variety of beverages are available, and, yes, sometimes a shoe will sail high and deep. Unlike during Colorado Rockies games, that is considered human error.

Nine doubles teams made the trek up Mount Charleston on a warm Sunday morning — a hot Sunday morning if you were in Pahrump — for another in a series of backyard horseshoes tournaments that has been one of the few organized sporting activities to continue during the COVID-19 pandemic.

The host of what was dubbed Gary’s Mountain Open was Gary Dilger, the brother of organizer Lathan Dilger, the president of the Nevada State Horseshoe Pitching Association. That body does not sanction these informal tournaments, although there are entry fees, trophies and prize money.

Gary Dilger has not been a serious pitcher for long, but that didn’t stop him and his wife, Sheri, from building horseshoe pits in their backyard. He estimated it took 30 days and $1,000 to finish the job, including “two pallets of concrete.”

“He’s been playing a little bit here and there just for fun, and then Lathan got him into playing, and he got me into playing,” Sheri Dilger said. “So we built our own horseshoe pit and cornhole pit. He and I compete every night.”

“I’ve been playing casually all my life, but I played two tournaments ago and kind of walked away embarrassed,” Gary Dilger said. “So knowing that I had my own horseshoe pit in my backyard I said I’d better practice. For the last month is about how long I’ve been playing, being really serious about it and coming out here every day and practicing.”

If there’s a horseshoes tournament, sanctioned or not, there’s always food, and Sheri Dilger was ready for the roughly 30 people who showed up in her yard.

“We have barbecue pulled pork, we have chili — meat chili and vegetarian chili — and nachos with some great nacho sauce and chips and dips and drinks and fruit,” she said. “I cooked it all last night. When I do my pulled pork I put it in my pots at night with Coke, and that makes it disintegrate overnight. Then I shred it and add the barbecue sauce. It’s really good.”

Did she have any help putting out that spread?

“No, not really,” she said with a laugh.

Despite the work involved, Sheri Dilger was all smiles, and not just because she teamed with Mike Nicosia to go 5-3 during the tournament.

”It’s fun because you’re with a bunch of friends and family,” she said. “Due to the COVID thing we can’t do too much, so it’s good. We’re limited to where we can go and what we can do. But here the kids can come and play and hang out with everyone.”

“They can kick you out of the park, but they can’t kick you out of your own backyard,” was how Lathan Dilger put it, even if the backyard belonged to brother Gary. Brother Steve Dilger also competed, as did son Kasey, while daughter Kim took pictures.

Kasey Dilger has won more than his share of these summer tournaments, despite pitching semi-seriously for only six months.

“Maybe because I stand where the 18-and-under and 70-and-over people play,” he said, noting that pitchers of those ages pitch from 30 feet rather than the usual 40 feet. “And if you’re handicapped, you can play from there, too.”

Helping to add diversity to this DilgerFest were Nicosia and his wife, Stacie, who made the trip from Pahrump. Stacie pitches in some events, but she sat out this one.

“We are socially distant,” said Stacie from her seat behind most of the others. Although she did not compete at Gary’s Mountain Open — she said she was serving as a designated driver — she is planning on pitching next year when the world championships come to Winnemucca.

Mike Nicosia said he has pitched in roughly 15 tournaments, sanctioned and nonsanctioned, this year.

“We usually do a little more traveling, but because of the COVID we’ve been staying in Pahrump,” he said. “We looked forward to coming up here today just to get out of Pahrump. Nice and cool up here. I love it.”

The casual atmosphere did not mean there was no concern for safety. While the pandemic seemed hundreds of miles away from the Spring Mountains, it was not far from anyone’s mind.

“I told everybody if you feel ill, don’t come,” Lathan Dilger said. “I had a player whose wife was ill, so he didn’t come. It’s an outdoor thing, and we’re mostly all 6 feet apart anyway, although there’s a lot of family in this one. We’re all spread out.”

Instead of a routine of NSHPA-sanctioned tournaments every two or three weeks, this summer has become one of events such as Jim’s Backyard Bash — won by Kasey Dilger and George Mallory — and DJ’s Ranch Open — won by Lathan Dilger and Neil Norvell. But for people who have had limited options because of the pandemic, these have been welcome diversions.

“I lost so many tournaments that I had to do something,” Lathan Dilger said.

Recruiting his brother was part of that something.

“My brother said he was going to build some horseshoe pits this summer,” Lathan said. “I asked him if he wanted to get involved, so he rushed getting the pits done, and they’re beautiful.”

“We tried to build our horseshoe pits as close as possible to standards, and between his professionals and our amateurs we had enough to have a pretty fun day,” Gary said.

Not that Gary Dilger needed another weekend activity. As the bass player for Blue String Theory, a popular five-man cover band, he was playing the night before at the Westgate Las Vegas Resort and Casino.

“We’re the only band right now that is playing because of the bar shutdown,” he said. “We’re playing every Saturday night at the Westgate casino. We played last night — 80s rock and roll, cover songs, everything from Journey to AC/DC. Believe it or not, the turnouts are really good. Everybody’s practicing social distancing and wearing their masks, and the casino can still serve alcohol. They just can’t have the bars open.”

Gary said the band’s normal residency is at Club Madrid at Sunset Station, a 500-seat venue that is not doing live music right now. “We hope to get back to all of our venues in the near future,” he said.

As for the results of Gary’s Mountain Open, there was no home-pit advantage. Lathan Dilger and DJ Zuloaga went 7-1 to capture the title and split the $360 pot. A tiebreaker among three pairs that went 5-3 left Kasey Dilger and Lee Fikstad in second, Mike Nicosia and Sheri Dilger third and Joe Kalache and Jessie John in third.

Meanwhile, the pitching will go on. The state championships originally were scheduled for Aug. 29 in Tonopah, but that is no longer an option.