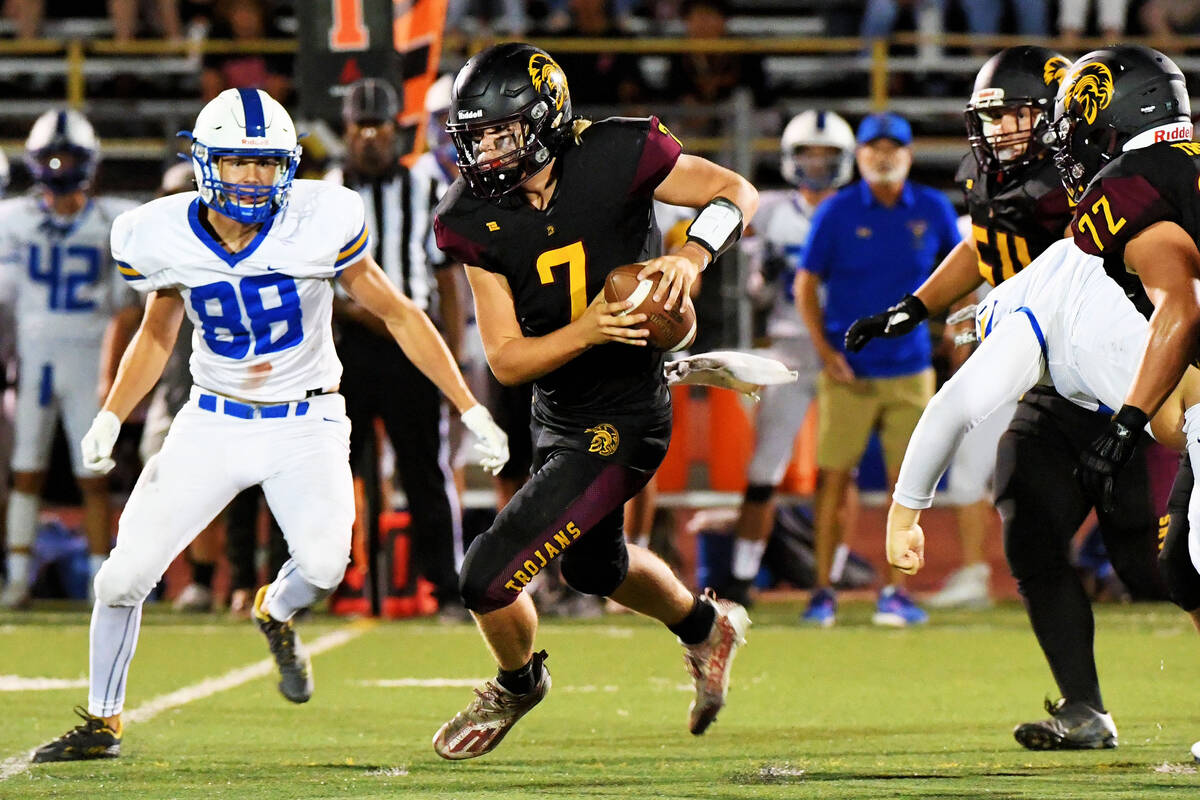 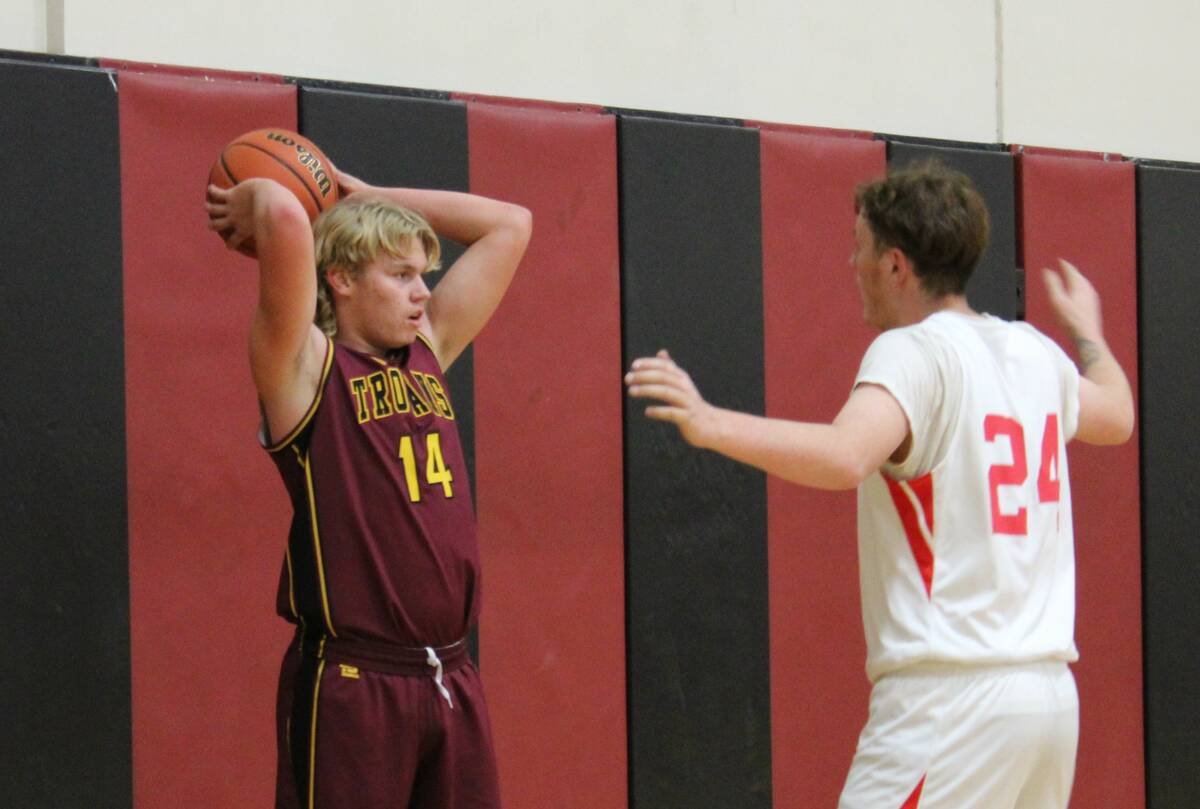 Danny Smyth/Pahrump Valley Times Junior forward Scott Oscarson (14) looks to inbound the ball for the Trojans during their game against Equipo Academy on Dec. 13, 2021.

Sports and dirt racing – that’s what Oscarsons do.

Scott Oscarson was born in the Las Vegas valley. Just before he was born, his parents were living in Overton, Nevada, a small town between Las Vegas and Mesquite a few miles off Interstate 15.

Not long after Scott was born, his family moved to the Pahrump Valley to be closer to his grandparents on his father’s side.

“The small town has more of a tight-knit community, which I really like,” Oscarson said of growing up in Pahrump. “The whole town comes to football games, that’s what I really like about it.”

This seems to be a common ideology among the players that I have interviewed. With the majority of my sports coverage dealing with Nye County, every player comes from a small town – and they all seem to love it.

Oscarson has a younger brother, and he’s the oldest of his cousins on his father’s side of the family.

The two brothers have a good relationship and bond the most while playing video games.

While Oscarson mentioned he personally loves to play Rocket League, a game combining cars and sports, he and his brother love to bond over playing Call of Duty and Madden.

He started with football and dirt biking, then would add basketball later in life.

Dirt racing is in the Oscarson bloodline. His father rode and raced dirt bikes, and his uncle participates in off-road racing.

Oscarson and his father went down to Mexico shortly before Thanksgiving to help his uncle in the Baja 1000 – an 828-mile race starting in Ensenada, Mexico and going throughout Baja California before finishing back in Ensenada.

Oscarson’s first dirt bike was a Honda 50cc bike with training wheels. He’s hoping to one day be able to participate in the Baja 1000, but it won’t be until sometime in the future.

Oscarson’s uncle participates in the 55 and older division, so that may be where he sets his sights for participating.

Oscarson’s parents gave him a decision. He had to play a sport, as many as he wanted, but he had to choose. He chose football.

He began his playing career as a tight end and left tackle on the offensive side of the ball.

“I ended up being a little bit too small for quarterback, at first,” Oscarson said.

Once he got into middle school and got his first growth spurt, Scott was approached about potentially playing quarterback and decided to go with it.

From then on, he stuck with playing the quarterback position – and it has turned into a good decision.

Oscarson took over the starting role midway through his junior year after stepping in at halftime in the Trojans’ game against Boulder City. In that game, Scott nearly led Pahrump Valley to a comeback victory, but they fell just short on the final drive of the game.

He knew going into the 2022 season, his senior year, that he was going to be the one to lead the Trojans offense on the field.

“Ah, man, it felt great to open it up your senior year,” Oscarson said of getting the starting spot. “They coaches, everybody had faith in me. I was really glad that they named me the starter this year.”

One of the biggest things that comes with being the starting quarterback is being one of the captains of the team and having the pressure of the team’s performance on your shoulders.

Oscarson would handle the pressure by stepping away from social media and spending time with his family over the weekend. He also mentioned that talks with his father helped after tough games.

The season didn’t turn out as the players and coaches would’ve liked, but Scott thought the season went well overall.

“I think we did great, actually,” Oscarson said. “We did everything we could, and I feel like our record does not represent the amount of fight we put in this whole year.”

The Trojans finished their 2022 season with a record of 4-5, missing out on the playoffs by just one game. They had a couple of games during the season that came down to the last possession of the game. Had any of them gone slightly different, Pahrump Valley would’ve been off to the playoffs.

Following football seasons, Oscarson would normally be gearing up to play in the basketball season.

He played forward for the Trojans during his junior year when newly hired head coach David Wilson came in to lead the program to its first double-digit win season in over 10 years and its first playoff appearance since the 2008-09 season.

“He is great,” Oscarson said of Wilson. “He is probably one of the best coaches I’ve ever had. He had a great scheme as well. He was a more free kind of basketball than the structured play style of basketball.”

Oscarsonwon’t be playing basketball this coming winter. Instead, he’ll be working on his quarterbacking craft to prepare for playing in college.

In the spring, Oscarson plans to play golf for Pahrump Valley. He is fairly new to the game, having just started playing golf during 2021.

The first time he had “golfed” since being a kid was when his dad took the family to Top Golf last summer.

Since that trip, Oscarson has increased his time on the course. He now plays two to three times a week.

One of his favorite courses that he has played is Seaside Golf Course on St. Simons Island, Georgia.

“It was right on the beach. You could see the ocean from the course, so it was great,” Oscarson said.

Following high school, Oscarson is planning to attend Ripon College in Wisconsin to play football. The division III program went 9-1 during the 2022 season.

Oscarson has already committed to playing for the Red Hawks and he’s hoping to sign with them shortly. He’ll be majoring in either sports medicine or sports management.

You can follow Scott and the rest of the Pahrump Valley boys golf team when they begin their season in the spring.