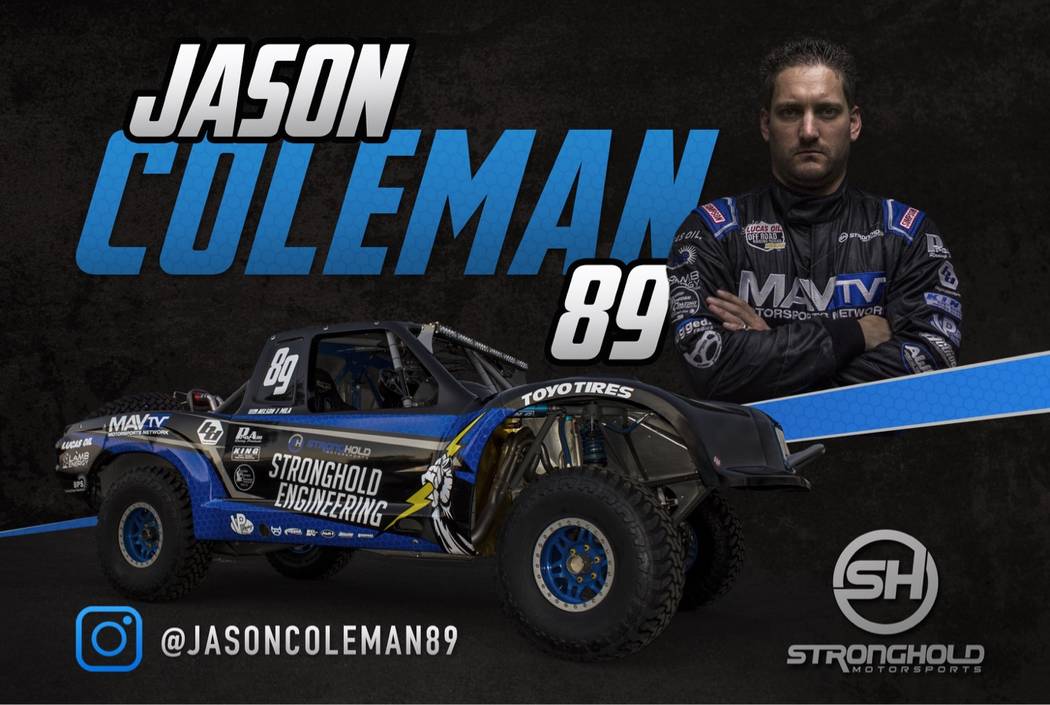 Special to the Pahrump Valley Times Jason Coleman stands with his No. 89 Trick Truck, which he will be driving in the Vegas to Reno race on Aug. 18, which starts in Beatty. He said he will be one of the first trucks leaving the start line, the sixth one. This is good for him, for if he is able to hold position, there is less dust. 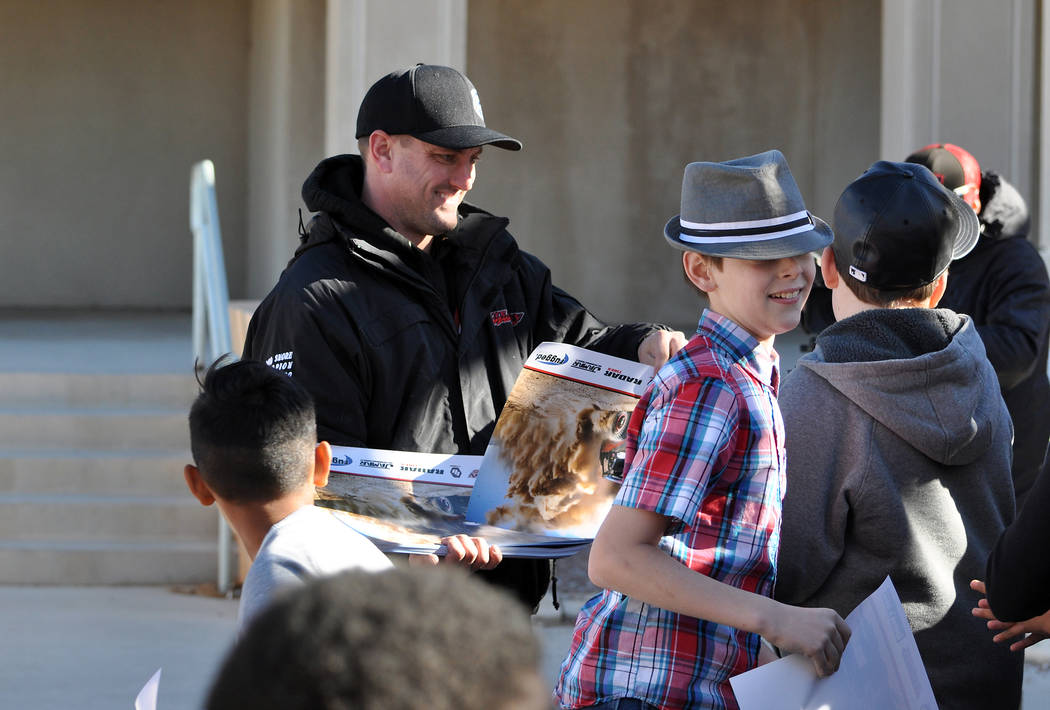 Horace Langford Jr. / Pahrump Valley Times Jason Coleman hands out posters to the kids at Rosemary Clarke Middle school last year in December just before the Pahrump 250. This year Coleman will miss the Pahrump 250 because of sponsorship obligations. 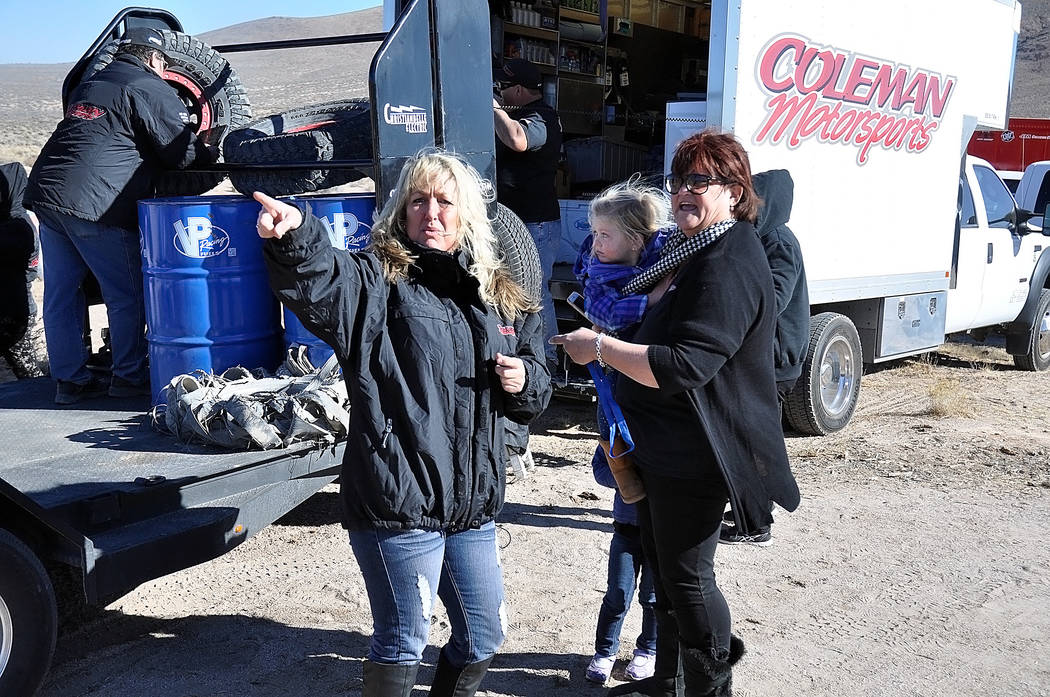 Horace Langford Jr./Pahrump Valley Times This year’s Vegas to Reno pit crew for Jason Coleman will still be a lot of family. His aunt, Cary Jubinsky, who lives in Pahrump, will be crewing for her nephew as she did last year. She is seen here in front of Coleman’s fueling truck at the Pahrump 250, which was in December of last year.

With the Best in the Desert General Tire Vegas to Reno race starting in nine days, drivers are getting ready for the longest off-road race in the continental United States at 550 miles, which starts in Beatty on Aug. 18.

Pahrump’s only driver with strong connections to our town is Jason Coleman. Coleman was last seen in Pahrump for the Pahrump 250 on Dec. 3, 2016.

He started off in off-road racing by sweeping the floors as a teen for the Terrible Herbst Motorsports team and he slowly worked his way up to driving a vehicle.

For him, driving a Trick Truck in the Best in the Desert Vegas to Reno race is a dream come true.

Just a year ago, he was driving for his family in the buggy class.

His number one fan in town is his aunt, Cary Jubinski, who owns Valley’s Edge Feed Store. At the time of the Pahrump 250 his racing team was his family. He has since had to make the transition from family to a professional racing team, Stronghold Motorsports.

Coleman has smoothly made the transition to a Trick Truck, having a successful run in the Best in the Desert Mint 400 where his team, Stronghold Motorsports, was 45th overall and 27th in class in their first race in the new No. 89 Trick Truck.

His team may have a different name, but Jubinsky said his family is still there for him.

“Yes, he has had to make a transition from his family to another team and it was hard to say goodbye to his family colors of red and white, but we haven’t stopped supporting him,” Cary Jubinsky, Coleman’s aunt said. “My brother, his father and I and a lot of his family will still be crewing this upcoming race. We will all be there for him for Vegas to Reno. His team is still family driven. Stronghold combined the crews.”

Jubinsky said this new team of Coleman’s was a big step for him.

“He has dreamed of going to the bigger vehicle, the Trick Truck, all his life. He is now racing with the big boys and it’s exciting to still be supporting him.”

Jubinsky believes her nephew at 34 has a lot of racing ahead of him.

“We will be praying for a win,” Jubinsky said. “He has started from the bottom and worked his way to where he is now. He worked hard, learning from the Best in the Desert racing. He wasn’t fed with a silver spoon. He had to work hard to get where he is. And we are all proud of him.”

He said he is going into the race confident.

“Every year you can’t give too much too early. This race is a race of attrition. Not losing your position and being able to finish.”

“I will know the courses in Baja but Vegas to Reno is a blind course. They don’t let us pre-run the course, plus in the Vegas to Reno race we also have to deal with the heat.”

Coleman said not many people get to turn professional racing off-road. The money just isn’t there.

Those that do race off-road have had to race the Lucas Oil series which features small course trucks and one to two-mile courses. They race the series because it is televised and they get a lot of exposure doing it for their sponsors.

“To race, the Lucas Oil series intrigues me,” he said. “Stronghold Motorsports has a person racing the series.”

But he understands there are few people who make a living just racing. To be exact, according to Rob MacCachren, there are only five that do it and he is one of the five.

“Any paid jobs are few and far between,” Jason Coleman said. “I do it for the enjoyment. As far as the Vegas to Reno race, a top 20 finish I would be happy with. Racing is always on my mind and we are building for a win at the Baja 1000 and seeing better results.”