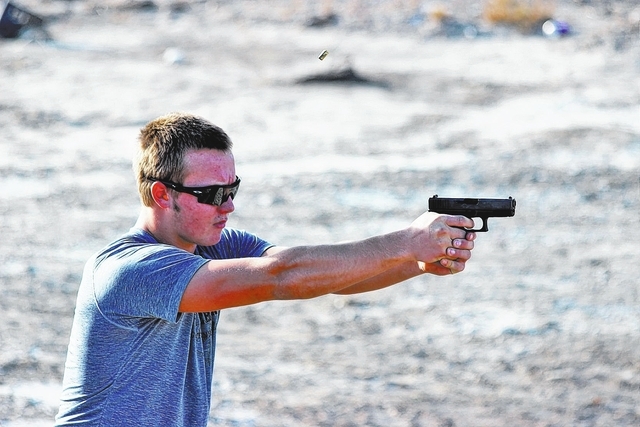 Junior defensive team captain Jeb Ayers for the Tonopah Muckers football team is one reason the Muckers do not have a losing season.

Ayers led the team defensively to a 4-2 league season and 5-5 overall. The defensive player loves to tackle and is one of the best athletes on defense with 31 total tackles. Ayers is an outstanding three-sport athlete who also wrestles and runs track.

“He has been my defensive captain the last two seasons because he has developed a great knowledge of the game defensively,” he said. “He is our best tackler on the team which is directly from his wrestling background. I have been coaching him in wrestling since he was in sixth grade and the things he has learned from wrestling is what makes him the player he is today on defense.”

Ayers broke his ankle in the second Indian Springs game of the season. Coincidentally when he left the field the team did not get another win and lost three games in a row. Part of that reason was because Ayers was like having a coach on the field leading the defense.

“There is a special drive in this young man to be the best defensive player on the field. He is very active on the field and takes good angles and tackles low. He is able to move our team into the right positions to create good match-ups for us on defense,” Otteson said.

Ayers is known as a quiet player off the field, but if you get him talking about the two things he loves most he will talk.

His two favorite things to do is play football and shooting. When asked about what he likes to do when he is not doing those two things, he replied, “When I am not shooting and not playing football, well that’s pretty much all I do. I like to hang out with friends and just have fun.”

He has been playing football since the first grade and he said one of the reasons the Muckers have improved in football is because many of the players start playing at an early age. He did say if all the Tonopah coaches used the same system like Alamo does and taught the game on a united front, the team would improve even more.

“They have not set up a good system yet for the kids coming up into high school. We have a junior high school coach and program, but I think they just have different points of view,” Ayers said.

The defensive captain enjoyed playing football with his older brother who is senior TJ Ayers. Jeb said the two are very competitive on and off the field. This year was the first year his brother played football because of open-heart surgery he had when Jeb was 13.

“If one of us gets more tackles, we would rub it in until next game. On the field we cooperate a lot. We really don’t fight on the field, only when we are off the field,” Jeb laughed.

Jeb said the problems with defense all arose when he got hurt and he believed he had failed his team and let them down because he had not thought to cross-train personnel in his position better.

“We were just planning on everyone staying healthy this year. We did not have people in multiple positions. We should have everyone know what needs to be done on every position and we didn’t. I did not take leadership and do that,” he said.

Jeb was really disappointed in the loss to Pahranagat Valley. He thought the game should have been closer.

When talking about football with Jeb one forgets he is a player and not a coach.

He wants to play football in college and hopes to be recruited by a small college. He has relatives in Montana and Wyoming and he thinks he might apply for colleges out there.

“I am looking at Wyoming and I have been contacted by Whittier College. I will go pretty much anywhere that would take me.” he said.

His other passion in life is shooting guns, which is something that has been a part of his life since he was able to hold a gun. Jeb said he enjoys the competitive aspects of shooting and he likes having friendly shooting competitions with friends and family.

“We would see who has the tightest group,” he said. “Who can get the best shot while walking at the target and also who can shoot best after and getting your heart rate up.”

Jeb’s longtime dream is to become a gunsmith and open a gunsmithing shop somewhere.

He bagged his first buck at 13.

“I have been hunting rabbits since I could shoot. He said he did not hunt much when he was 12 because his brother had open heart surgery to repair a heart murmur and a leaky valve. We were not able to go out a lot then,” Ayers said.

The young gun enthusiast said most of what he has learned about handling guns comes from his father who is an armorer for the federal government. He said his father has taught him to take apart all sorts of weapons like Glocks and the hunting rifles he uses. Jeb hopes to someday work with machine guns, sniper rifles or assault rifles.

His father also has taught him some decent tracking skills. Jeb says he is pretty good at tracking and has no problem telling the difference between a doe and a buck by just the way the toes are spread.