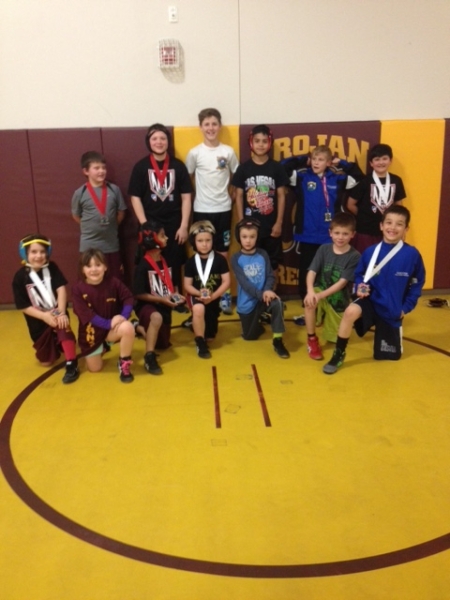 Junior Trojans coach Steve Keefe said he took 17 wrestlers and 14 earned medals. He said he was proud of all his athletes.

He said the team took fifth place out of 16 teams and the team was fifth in the number of pins.

Sammy Mendoza had the fastest pin of the tournament for the team. Kelsen Smith had the fifth fastest with a 13-second pin. The most pins in the least amount of time went to Ashton McClard, who also earned fifth place in the tournament with three pins in 3 minutes and 50 seconds. Brennen Benedict scored a team high of 26 team points, which was the third highest for the entire tournament.

Keefe said the team will be heading to Primm on Sunday for the Nevada State Championships at the Star of the Desert Arena. All the team members who medaled will be competing.

Keefe said the goal for his wrestlers was to learn the basics and to learn “mat awareness” (wrestling knowledge) so that when they get to high school they have the basics.

“We want them to have all the basics, like keeping the head up and not wrestling on your knees,” Keefe said. “I think it will be a great help to coach Craig Rieger (Trojans wrestling). For the younger kids, we work these kids hard and then play games to keep them interested so they will come back. It keeps their interest and the kids do have fun.”

Keefe said this year was an eye-opening experience.

“It has been a learning experience for me coaching the little kids,” Keefe said. “High school kids are more mature and the little kids don’t have the coordination and you have to break things into parts. It was tough.”