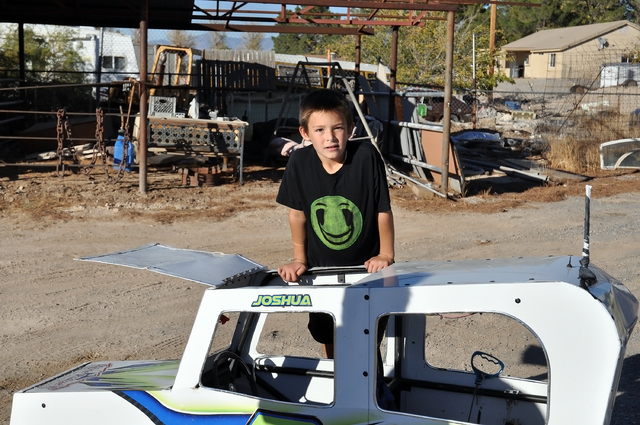 Horace Langford Jr. / Pahrump Valley Times Joshua Slusher proudly displays his car at home. The car has the roll bar and cage like the bigger cars and even has the safety harness. 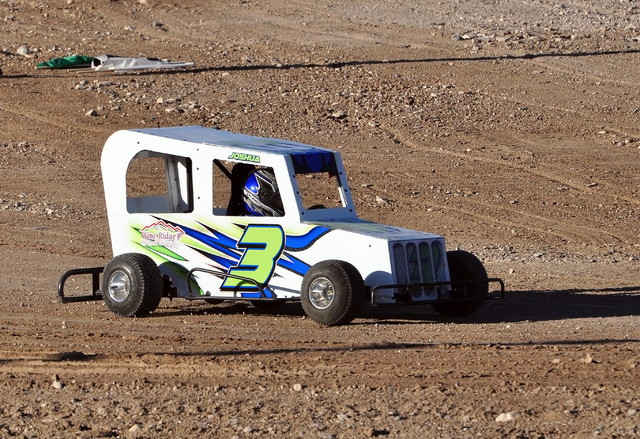 Horace Langford Jr. / Pahrump Valley Times Joshua Slusher in his car at the track during a race at the Pahrump Valley Speedway. The Mini Dwarfs race on the infield of the bigger track. 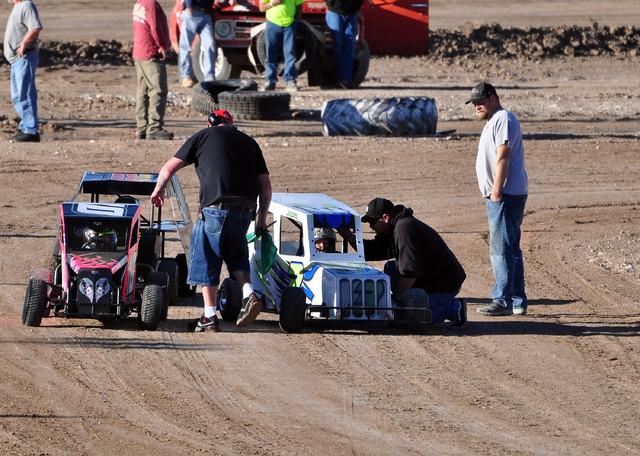 The need for speed comes in many forms and at the Pahrump Valley Speedway there’s a mini version that is growing in popularity.

The Mini Dwarf Division at the track is in its second year at the speedway and is experiencing larger numbers than last year. It’s where the kids go when they have the need to race.

“We definitely see more of the kids coming out this year than last year,” track flagman Dale Geissler, said.

Steve Slusher, a former racer at the track, added, “I see new kids racing every time I take my son out racing.”

Racing is a growing sport in the valley for kids and already several high school students race.

Will it ever outdo football and soccer?

Mini Dwarfs are small cars like go-carts. The division is racing for kids and they race on a smaller track with smaller cars. The track is on the infield of the larger track at the speedway. Cars have 6.5 horsepower engines and go about 28 miles per hour.

The kids range from ages five to 13 and have two age divisions, 5-8 and then 9-13. There have been about 20 kids coming to the track this year on a regular basis.

“He got interested in racing when he saw his cousin Jake Pike race at the track last year,” he said. “I bought him a car and started working on it and we got it ready for his seventh birthday.” He said he saved money on the car by doing a lot of the work himself.

Parents see the sport as an alternative to other fall sports like football.

Slusher has no reservations about his son racing race cars and feels it’s safe.

“He will probably race after he is 14 on the bigger track,” Steve Slusher said. “I will even say it is safer than football and it builds kids’ confidence. I saw him get out there, a kid who never raced before and only had driven a golf cart. He was in position to win his first race. He got second but was excited for that.”

Steve Slusher said he took his son out of Pop Warner this year so he could race at the track.

He said his daughter Adryanna is in middle school and is older and even raced this year.

“Adryanna raced but she really didn’t like it,” he said. “She did get a second place, but got frustrated with it and stopped.”

Steve Slusher said he loves the kids racing but he would improve only one thing.

“The five-to-six-year-olds need their own division because they cause the majority of the wrecks,” he said. “I put my son in the 9-13 division simply because I feel the younger kids are not mature enough to make fast decisions, like deciding when to stop.”

Geissler added laughing, “The younger group is getting better. They know where to line up but they still don’t know where the brake is and they stop when they hit someone.”

Geissler said the cars are safe. They have all the safety gear that the bigger cars have, if not more.

“I like the racing because it’s a challenge to me,” Joshua Slusher said. “I think I will be either a race car driver or a football player.”

He said he only had one accident in the car and that was not during an actual race, but practice.

“I was racing my friend Jaiden and I was passing him and my back wheel got stuck on his and I flipped my car,” Joshua Slusher said. “I was OK.”

“It wasn’t a bad accident,” Steve Slusher said. “I asked him if he wanted to continue practicing and he kept going.”

Joshua Slusher proudly displays the number “3” on his car.

“My favorite racer is Dale Earnhardt and that was his number and my dad’s number,” he said. “I love racing and I want to race until I am fifty.”