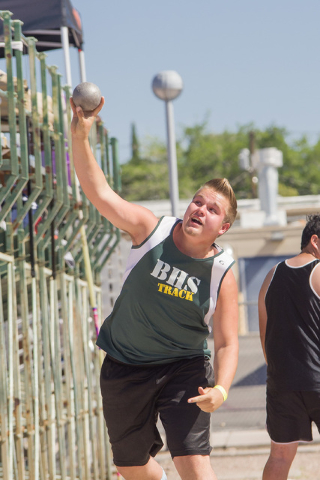 The Lady Hornets did it again. They won the regional championship for the sixth season in a row. The team was first out of five teams. Beatty won with 179 points, Tonopah was second (131), Round Mountain third (40), Pahranagat Valley was fourth (36) and Indian Springs fifth (20).

The Beatty girls were also champions in the 4×200, which was composed of Maggie Cathcart, Andrea Leon, Vanessa Gamboa and Alexia Gil (2:02.19).

The top four girls in each event will be going to state, which starts on Friday and ends Saturday in Carson City:

The Beatty boys had a big surprise on Saturday as Robby Revert took home the gold. He was the only individual regional champion for the boys in the shot put (37-02.5). The boys took second at the regional meet (99.5) out of 7 teams. Spring Mountain was first (309), Tonopah third (63), Indian Springs fourth (42), Round Mountain was fifth (34).

Revert in April said he wasn’t thinking championship. At the time he was just happy to beat Jordan Berkowitz of Tonopah, who was throwing around 34-36 feet at the time. He said he got some last-minute training though from former head track coach Jerry Adcox and Steve Sullivan.

“That made a difference,” he said. “Adcox helped with the throwing aspect and the day before the district, meet Sullivan’s coaching helped me with my footing. I listened to both of them.”

He said his first throw at the regional was not that amazing.

“I threw a 33-footer and was close to my personal best, so I was feeling good and then my second throw I threw a 36-footer,” Revert said. “That surprised me and when some guy from Spring Mountain beat that throw at 36-8, I told myself not to get beat and my confidence was high.”

Revert said he wants at least a 38 for state and next year wants to be throwing in the 40s.

The other champions came in one of the relay teams. Beatty took first in the 4×200-meter relay (1:39.06) composed of Jacob Oseguera, Nate Russell, Michael Olson and Jhonpaul Adajar.

The following boys will be going to state in Carson City: