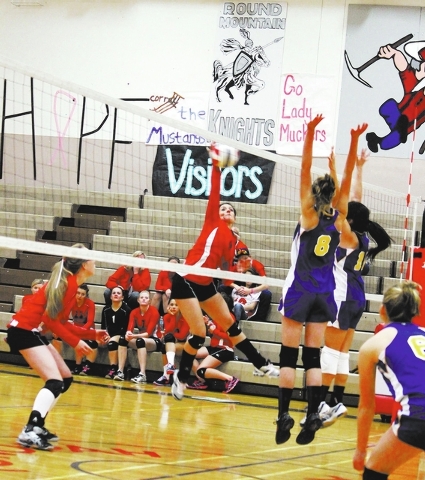 Sidney Maughn said it was an important win.

“It is league, so we really do want to win it and as it’s homecoming everyone is here to support us and we want them to feel proud,” she said.

The Muckers didn’t let anyone down. With 5 hits and 6 kills, Maughn played a major role in the victory but she kept referring to the teamwork as the key for the Lady Muckers’ success.

“I think we clicked today,” she said.

On the other hand, Coach Harvey Gonzalez recognized his players did not give 100 percent of themselves, but the teamwork this time was enough for facing Lund.

In the first part of the game, the coach believed his team was moving but not talking on the field.

“They were working together as a unit but they weren’t communicating with one another, and out there, they should be screaming and yelling. You should hear them constantly talking to one another on what to do, where they’re going, who’s got the ball, who’s hitting, who’s passing, they needed more of that,” explained the varsity coach.

He concluded, “I’m proud that my girls still win, they’re very talented, and you know it’s a league game and we got the W so that’s what counts and I’m excited about that.”

With this league win, Lady Muckers (6-1, 2-0) will travel to Beatty more confident so they can face the Hornets, whose current record is 3-1 in league play. The Hornets have won their last three games in a row.