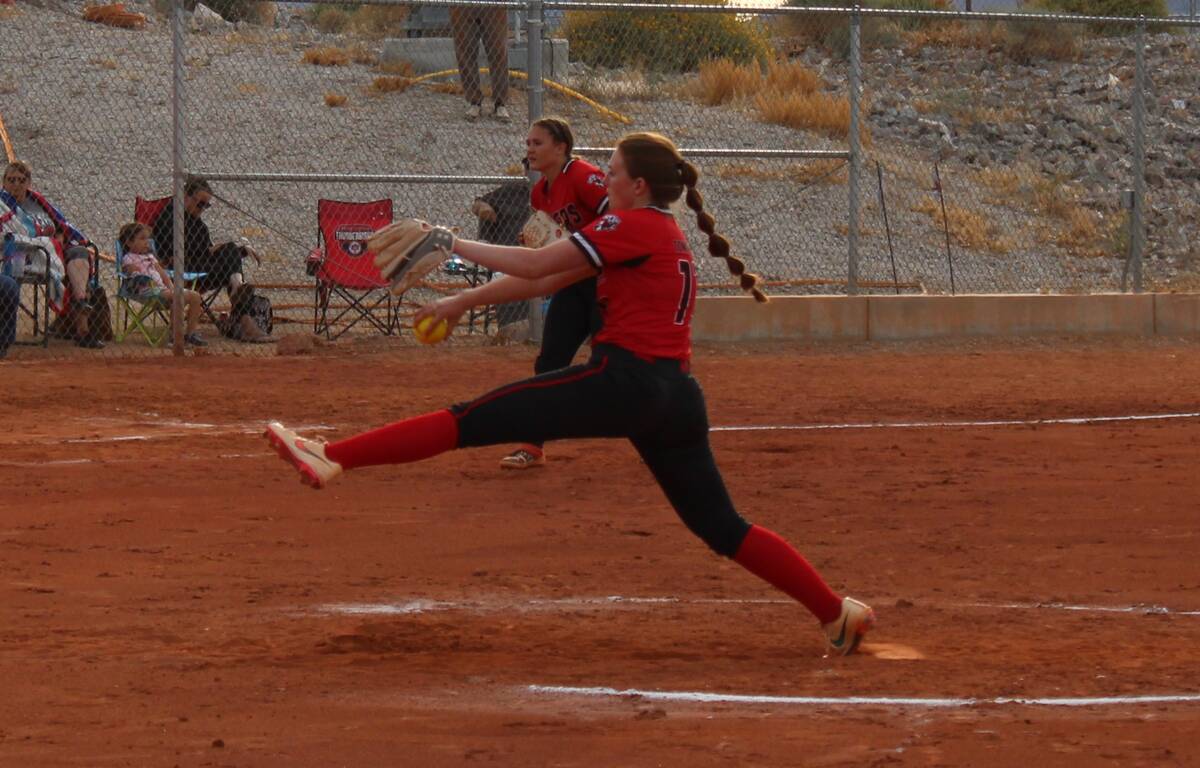 Danny Smyth/Times-Bonanza & Goldfield News Tonopah softball pitcher Jessica Callaway gets ready to deliver a pitch during the Lady Muckers' first-round victory over Indian Springs in the Nevada 1A softball southern regional tournament on Thursday, May 12. 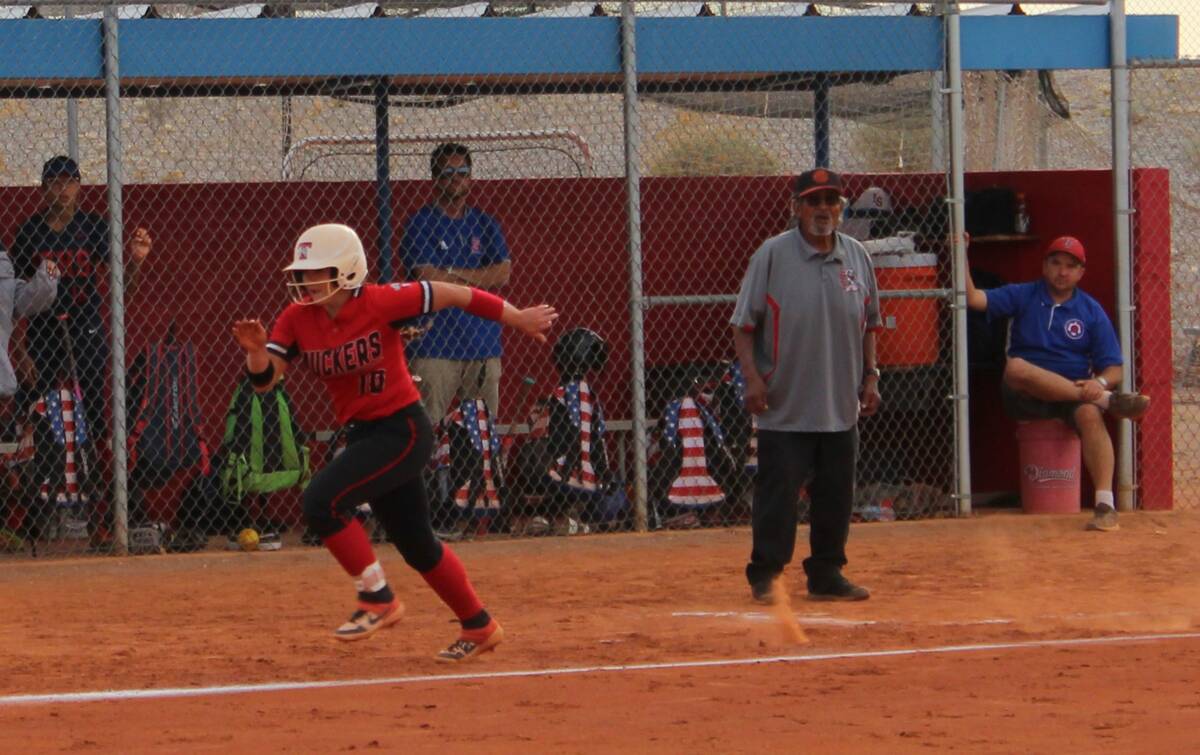 Danny Smyth/Times-Bonanza & Goldfield News Tonopah's Allee Thompson runs home to score a run during the Lady Muckers' 13-2 victory over Indian Springs in the 1A softball southern regional tournament on Thursday, May 12. 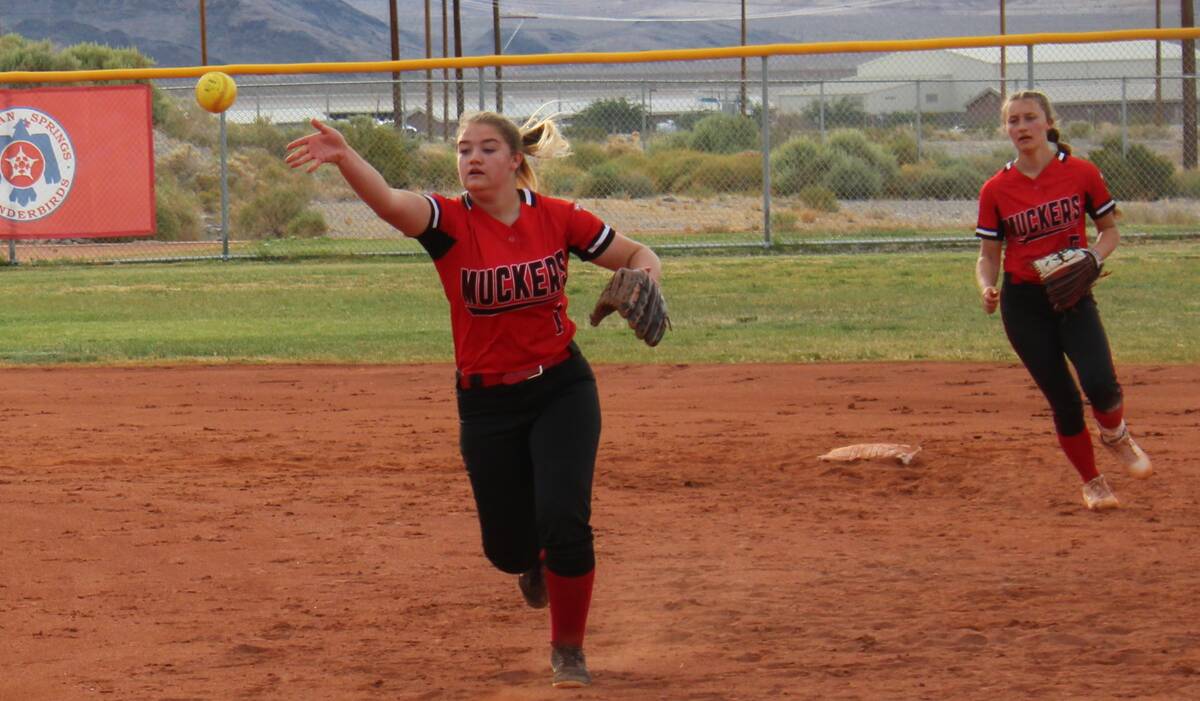 Danny Smyth/Times-Bonanza & Goldfield News Tonopah softball second baseman Tayler Gudmunson (1) tosses the ball to Hannah Dowers (not pictured) to get an out at first base in their game against Indian Springs during the southern regional tournament on Thursday, May 12.

Senior pitcher Jessica Callaway was leaned on heavily throughout the tournament. She started all four games for the Lady Muckers.

Despite getting beaten by the Panthers in the second round of the tournament, Tonopah made it to the regional championship game with a 17-8 victory over Indian Springs in the final game of the loser’s bracket.

Savanna Muns and Hannah Dowers combined to go 12-for-25 in the regional tournament, with 13 runs batted in and they each scored four times.

As you’re reading this, the Lady Muckers are currently in Reno getting ready to play for the Nevada 1A state championship. They kick off the tournament with a game on Thursday afternoon against Wells High School at 2 p.m.

Wells defeated Tonopah in two of the three games between these teams during the regular season.

If the Lady Muckers come away with a victory in the first round, they’ll move on to play the winner of the Pahranagat Valley vs. Coleville game on Friday morning at 11 a.m.

If Tonopah can’t get a win and are sent to the loser’s bracket, they’ll play the loser of Pahranagat Valley vs. Coleville on Friday afternoon at 1:30 p.m.