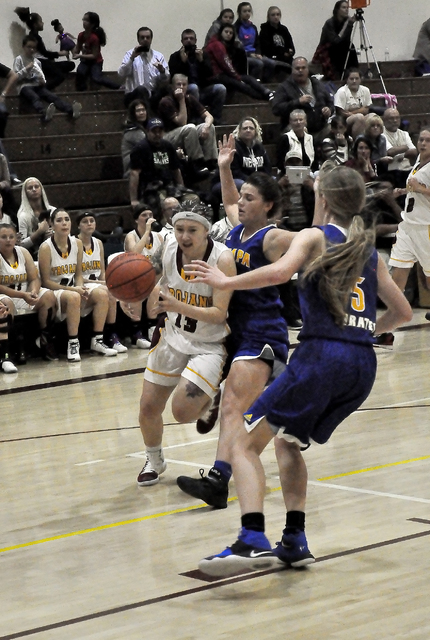 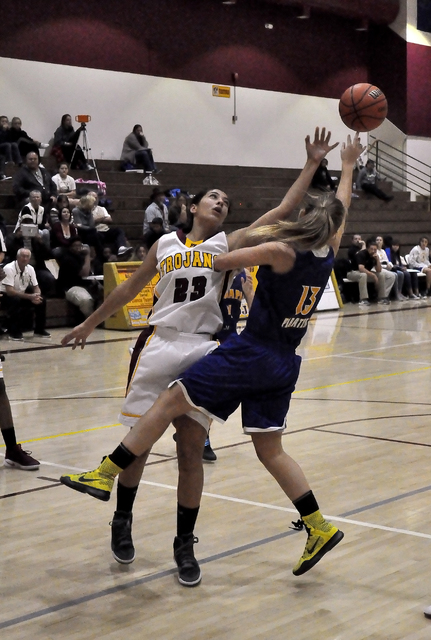 Isabelle Meza (23) goes for a rebound against the Pirates on Tuesday. Meza was the leading scorer for the Lady Trojans with 15. Horace Langford Jr. / Pahrump Valley Times 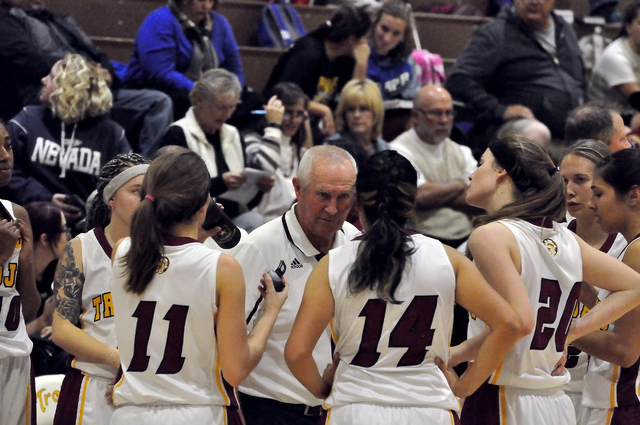 Trojans coach Bob Hopkins tries to rally his troops late in the third quarter. The girls were outscored by the Pirates 16-2 that quarter. Horace Langford Jr. / Pahrump Valley Times

Trojans girls basketball lost the season opener Tuesday at home to Moapa Valley, 43-28. The Pirates ran away with the game in the second half and shut down the Trojans offense in the third quarter.

Moapa finished as the third-seed finisher in the regional playoffs last season, and it looked like they picked up right where they left off.

The Lady Trojans are under new head coach Robert Hopkins, who has returned to coaching after a nine-season break. The team had a different feel as they took to the court. The girls’ defense was tough as they kept pace with the quick scoring offense of Moapa Valley.

In the first half, the girls also kept pace basket for basket. Pahrump led 15-14 at the half.

The third quarter did not start well for the Lady Trojans, as they failed to score on their first three possessions. Hopkins tried to rally his troops and could be heard telling his girls “shoot the ball” during a timeout.

At that time the Pirates had stepped up their defense and used a full-court press to disrupt the Trojans offense and this caused a lot of problems for the Trojans in the form of turnovers.

“We have to improve on our press breaker,” Trojans girls coach Bob Hopkins said. “Too many turnovers that turned into baskets for Moapa Valley.”

The Trojans defense was good enough to keep Moapa from routing Pahrump.

“Defensively, we played well the entire game,” Hopkins said. “We had a lot of bright spots in the game and that is what we will try to build on. We will get better as the season goes along. We have put in a lot of things that are new to the girls and so it will take time to grasp those things. All in all, I was pleased with how we played except for the third quarter.”

The top scorer for the Trojans was senior Isabelle Meza, who scored 15 points, including a three-pointer in the second quarter.

Jill Smith and Cimone Wrayball had four points apiece. Smith was hampered by picking up her fourth foul early on in the third quarter that may have prevented her from being more aggressive offensively.

“The kids, for the most part, played hard the entire game,” Hopkins said. “We need to learn how to win and sometimes that is the hardest thing to coach. Hope to see a lot of fans when the girls and boys play Vo-Tech at home on Dec. 9.”

The Lady Trojans are at the River Valley tournament in Arizona this weekend.

Taylor Egan had eight points, Jackie Stobbe had four and six steals. Hopkins said 11 girls scored and he added that Maddy Hansen and Virgina Weir had a good floor game.