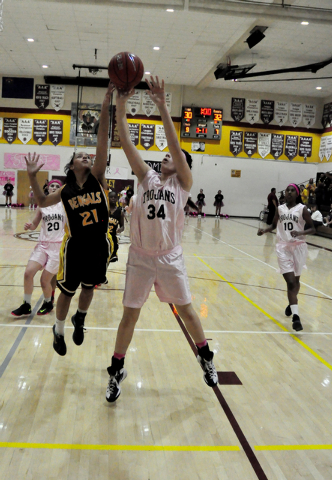 The Lady Trojans lost in non-league action Friday to Bonanza, 42-38.

The Trojans kept up with Bonanza throughout the whole game and at the half was down only by one point, 16-15. At the end of the third, Pahrump had an 18-15 lead, but the girls allowed Bonanza to outshoot them, 11-5 in the fourth and this was the difference in the game.

Trojans shooting was led by Alyssa Murphy, Jill Smith and Shayla Dance, who each had 8 points.

The Lady Trojans played their last home game on Tuesday (past deadline) against Mojave (9-11, 5-7), which was senior night and then the team plays their last game of the season on the road at Spring Valley (23-1, 12-0) on Thursday. The Grizzlies are not only the number one team in the division but they are also undefeated in the conference.

Daniel Foss led the Trojans in scoring with 21 points. Parker Hart was next with 11 points.

The boys played Mojave (15-8, 9-3) at home on Tuesday for senior night, coverage on Friday. The Trojans are away at Spring Valley (8-16, 3-9) for their last game on Thursday and will finish the season in last place in their division.