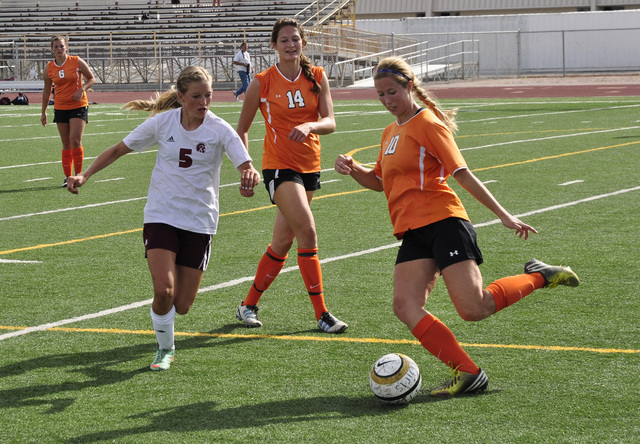 Trojans Coach Pam Larmouth said all the schools were competitive. “We had a great time in Spring Creek. We won all three games. Our first game against Jerome HS was not very competitive but we didn’t play very well as a team. It looked as though we would play the same as we did against Douglas. We won 5 -1 but it wasn’t very pretty,” Larmouth told the PVT in an email.

Larmouth said she was able to play both of her goal keepers against Jerome and she was able to see different players score in that first game. The game was a bit too chaotic, but Larmouth said her girls settled down. Against Elko she said the team played a superb game. “The girls started playing as a team and working together. The wings were running their patterns and doing a great job. I played all five of them and even put Sabrina Lunetto up there to see what she could do. In the second half the Elko team just had their players play defense so it was our four offensive players against their eight defenders so we only scored once. We won 1 – 0 with Sydney Dennis scoring in the first half. I was excited to have our wing players step up and the team as a whole played well together. Vaniah Vitto was awarded a varsity spot for her efforts,” she said.

Larmouth said the game against Spring Creek was challenging. “We had watched their game the day before with Fallon and knew that we would need to step it up,” Larmouth remarked. “They were first to the ball and very physical. Spring Creek, Elko, as did Douglas and last year’s South Tahoe, all play the ball in the air. Playing balls in the air isn’t really our strong point, but against these teams we did amazing. Alyssa Turner headed at least 10 balls each game and she only played one half against Spring Creek.”

In that game, Turner injured her knee and the team is awaiting to hear what the doctor says. “We were very concerned about midfield with her out for the rest of the game. We put Jaime Murphy in with Cierra Friesz and they were very good together. They held Spring Creek with an amazing effort from the defense. Brittany always plays hard and had another awesome performance. Ashlyn and Sabrina were in top form and stopped everything that came by. Maddy P. has been moved to the outside and she had the best game of her career. She had the audience cheering her on, she didn’t allow anyone by. Spring Creek was stopped and we scored with an assist from Paige and the goal from Sydney,” the coach explained.

The team plays its first league game at home on Wednesday against Mojave at 4:30 p.m.