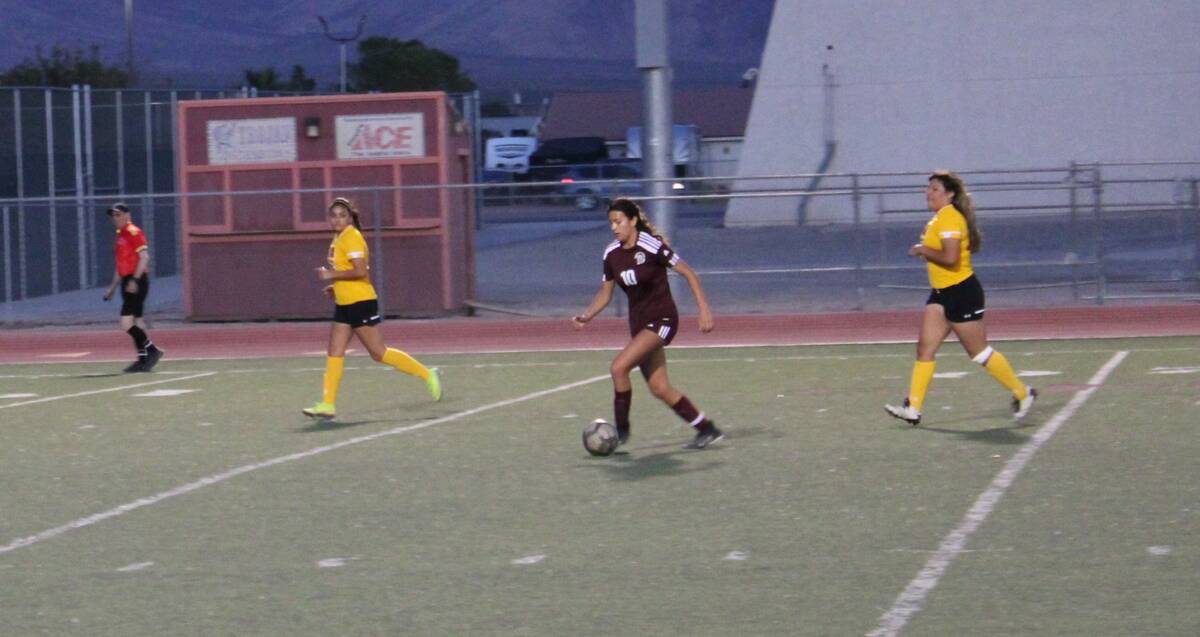 Danny Smyth/Pahrump Valley Times Junior midfielder Kailani Martinez (10) had a goal and two assists for the Pahrump Valley Trojans in their 10-0 victory over the Del Sol Dragons on Wednesday, Sept. 21.

Following the Lady Trojans’ 0-0 tie last week against Moapa Valley, they were looking to get back on the scoreboard in a big way.

Last season, Pahrump Valley won all three matchups by a combined score of 10-1, including a 2-1 victory to capture the southern regional championship.

Monday’s game was a rollercoaster of emotions for both teams.

By halftime, the Trojans and the Eagles were tied 2-2, but the second half was all Pahrump Valley.

Juniors Paris Coleman and Hannah Hemphill each got their first goal of the season against Boulder City. Hemphill’s goal was also her first goal as a member of the Trojans’ varsity team.

After taking control of the game in the second half, the Trojans were able to put two goals on the board and take the victory, 4-2.

On Wednesday night, the Trojans welcomed the Del Sol Dragons.

This game was much less stressful for Pahrump Valley as they were able to win with ease, 10-0.

Avena and junior forward Courtney VanHouse each had four goals and an assist for the Trojans offense.

“It was a lot better passing on our end,” head coach Julie Carrington said. “Good goals and communication. Midfield is coming together on positioning with Kailani [Martinez] being able to switch with Mia [Carlson] when needed.”

Martinez scored her first goal in the last four games on Wednesday against the Dragons. She also added two assists, giving her seven goals and four assists on the season.

At the midway point of the season, the Trojans now hold a record of 10-1-1 overall and 2-0 in league play.

Carlson is proving to be a very important piece for Pahrump Valley’s midfield.

The Trojans will take the next few days off and will return to the field next Thursday, Sept. 29, when they travel to Henderson to take on the SLAM Nevada Bulls.

Pahrump Valley took both matchups against the Bulls last season, allowing just one goal between the two games.