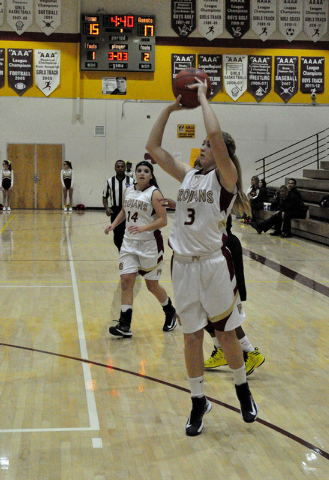 The Lady Trojans traveled to Del Sol and lost in a close game that went into overtime, 30-36. Pahrump (1-6 overall, 0-1 Sunset League) let go of a 7-2 lead in the first and then trailed 10-9 at the half. In the second half, the Trojans matched the Dragons point-for-point. Each team scored 9 points in the third, and the Lady Trojans outscored the Dragons 9-8 in regulation time to tie the game.

The two teams were tied with 48 seconds to go in the fourth quarter and the Trojans held on to the ball for the last shot. They were fouled and no whistle blew and the game went into overtime.

“We just didn’t knock down enough to win. Every player played. Helen Vann, C’mone Wray-Ball and Jordan Egan gave great minutes in the press, and are improving every day. They’re pushing the older kids, and will continue to see the floor for their efforts,” she said.

Shayla Dance had 10 points and Jill Smith had 9 points and 9 rebounds.

The Trojans boys basketball team went up against Del Sol last Friday night and lost 33-71. This was the Trojans’ (0-4 overall, 0-1 Sunset League) second Division I-A loss. Del Sol (3-1 overall Sunrise League) outscored Pahrump 32-15 in the first half and 39-17 in the second half. The Trojans shot 20 percent from the free throw line and made 11 field goals on the night.

“The boys played very hard and never looked like they were giving up,” Toomer said. “We are going to be working hard at breaking pressure and not allowing the other team to get second shots. That means a lot of work on boxing out. We are getting a lot better working as a team and stressing the importance of the team concept for us to be successful this season.”

Uriel was the leading scorer with 13 points followed by Nolan with 8 and TJ Milk with 6.