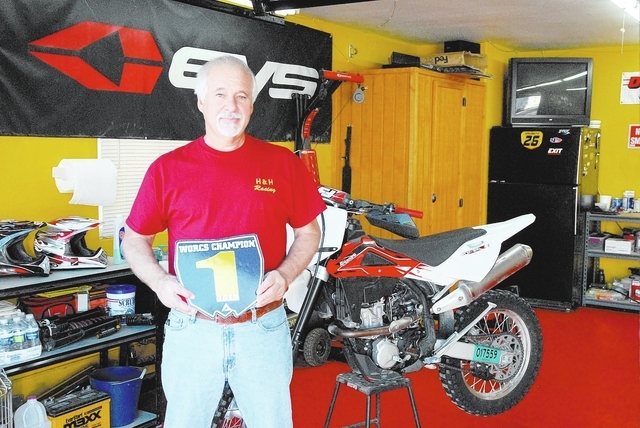 Quad racer Mike Hrubetz will be turning 60 within the next month and just won his first championship in quad racing.

It has been 30 years since he first raced as a young man. He decided to start racing quads because his kids were all out of the house, and he has been racing now for four years.

The WORCS series will see over 11,000 racers with backgrounds in enduro, motocross, Hare and Hound, Hare Scramble and Best in the Desert.

This year the senior racer had five victories out of nine starts, which was enough to win the WORCS championship in his racing class.

“It’s a big deal when you get older. I am the oldest competitor in the WORCS series as far as ATVs, in other words there is no one older than me. I am the oldest guy by four or five years in the series. It’s a national series, predominantly west coast,” he said.

“When I was young I used to race snowmobiles and three wheelers. My racing life went away because of married life and children. I was 30-years old when I last rode a three-wheeler. I got married and had two boys. As my boys grew up they raced because it just got too expensive for me to race and the boys,” he said.

WORCS starts most of its races on a motocross track and then takes the course off road. Hrubetz said each race lasts about an hour and are about 15 miles long. He said there are a lot of challenges on the courses which make the racing tough. A WORCS course will have obstacles such as jumps, mud, rocks and steep inclines.

“It is very physically demanding to try to maintain that speed for a full hour. We end up running typically somewhere between six or eight laps depending how technically challenging the course is. You never know what kind of terrain it will be,” Hrubetz said.

In his class, he can run any modifications he wants on his motor or his suspension. He is not really worried about other people spending lots of money to out-muscle him on the motor.

“If you over-build the bike and have too much horsepower, too big of a motor, to ride that horsepower for an hour it wears out your arms and legs and just beats you to death. Even the pros will tell you there is a certain horsepower range that everyone tries to be in because if you get too much, you can’t stay on the bike for an hour. If you don’t have enough, you have a problem keeping up on straight-a-ways,” he explained.

In his ATV he is running a 450-cam-am block, it comes stock with 36 horsepower and he modified it to 47 horses.

Most of the modifications go into his suspension, tires, and chassis. He said he will spend up to $3,000 modifying just the suspension.

“After the suspension, we spend a lot of money on the tires and steering stabilizers and different handlebars, that takes the vibration out of it. There are so many things on a quad you change. We even put a better seat on it. If the seat is really hard, you take a lot of jolts to your lower back. You try to do everything you can to ease away at that,” Hrubetz said.

At the moment he is doing most of the work on his machine himself. He has two sponsors that take care of the suspension and the engine work.

The work on the engine was so good he had no engine failures in nine races, which he was happy about.

“I never had any problem, the engine lasted the whole year. Partially because of the level I have achieved has allowed me to get some pretty good sponsors. It has helped me with the financial load and helped me with the more intricate equipment. The shocks are a whole different level. It takes a shock expert to do your suspension. You have an engine guy and it takes one of those to really make the engine last. Most of the time guys blow out motors all the time,” he said.

His main goal for next year is forming a team to take on the Best in the Desert race, Vegas to Reno. This has been a dream of his for some time.