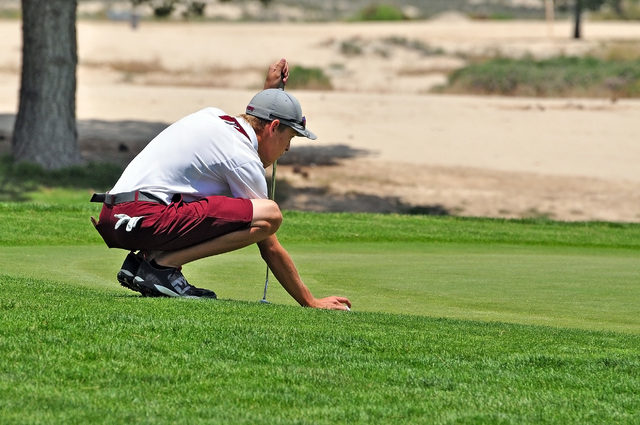 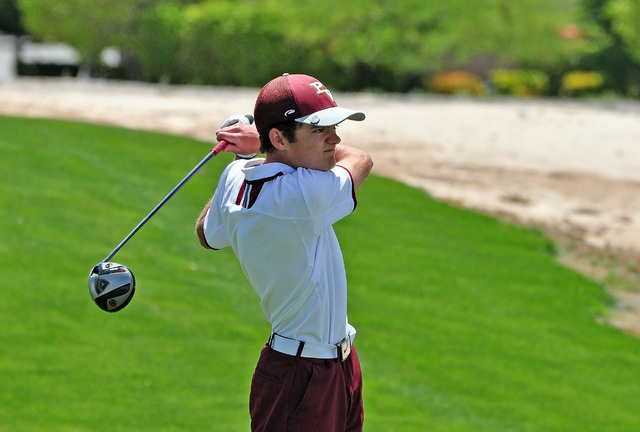 Austen Ancell came within three strokes of repeating as champion at the Nevada State Golf Championship at the two-day tournament at Mountain Falls on Wednesday. He went head-to-head with Faith Lutheran’s Charlie Magruder, who in the end won the individual state title.

It seemed almost an impossible task, something you would see at a PGA tournament like the Masters.

At the start of round two at the Nevada State Division I-A Golf Championship, Charlie Magruder of Faith Lutheran had an eight-stroke lead over Pahrump Valley’s Austen Ancell. Magruder had carded a five-under-par 67 on Tuesday to Ancell’s 75 and most would have said it was a done deal and that was the first day.

But Ancell had faced Magruder at regionals and was used to being behind and he was up for the task. Magruder had a nine-stroke lead going into day two of the regionals and Ancell had whittled that down to just a one-stroke lead, almost catching Magruder for the regional title. Could he do it again? It would take at least a five birdie day like he got last year at the state tourney.

When Ancell was asked before the start of round two if he could catch Magruder, he replied, “It’s doable, I just need to keep my head in the game,” he said.

Trojans coach Bob Hopkins agreed it was an exciting round of golf.

“Austen had let Magruder get too far ahead, if it would have been only a five-stroke lead he would have had it,” he said. “I just told him to go out and play because when you go out and try to get birdies, you usually get bogies. Birdies will just come if you play your best.”

Ancell said the key to playing well in the second round would be his short game.

“On Tuesday I had problems with my putting and chipping,” Ancell said. “I was just not putting well.”

Randy Mudge, director of golf at Mountain Falls, said, “Mountain Falls is all about the putting, if you can’t do that you won’t do well.”

Ancell’s short game came alive as he birdied his first hole. The short game couldn’t get any shorter on hole one as his second shot on the 384-foot hole landed within a foot of the hole, which he sunk for the bird.

The match came down to the back nine as Ancell knew it would.

“I knew I had to get as many birdies as possible to put pressure on Magruder on the back nine,” Ancell said.

Magruder gave Ancell an opening on hole 12, one of the hardest holes on the back nine, by taking a triple bogey on the par-four hole.

On hole 15, both Magruder and Ancell had a birdie.

“I wasn’t thinking of the math at the time,” Ancell said. “I would rather not know. It’s much easier to not know and to stay calm.”

At the end, Ancell congratulated Magruder, who played his last round of golf in Division I-A, as Faith Lutheran will be moving to Class 4 next year and the Trojans will be in Class 3. Magruder finished with a 142 and Ancell finished with a 145.

“I didn’t execute and put myself in position to win,” Ancell said. “I congratulated Charlie (Magruder) and told him he deserved it after that first round of golf.”

Derek Moore for the Trojans had a great state performance too, finishing in third place, carding a 158.

Junior Ancell will be working hard over the summer to improve that short game.

“I want to lifts some weights over the summer so that I have better control and stability when I play,” he said. “I will be working on the short game 75 percent of the time. I don’t want to drive the ball farther but I want to be able to swing under control and not just try to hit it hard. I also need more stamina. I will focus on my putts 10 feet and under too.”

The whole varsity team are all seniors and will be leaving Ancell with a new group next year.

Hopkins praised this group of players for improving over the years.

“Drake Asuncion, Mike Hildebrand and Canen Hastings all started golfing their freshman year,” the coach said. “Whereas, Derek Moore, Ancell and Kelby Lindberg came up through junior golf. That is quite a feat for them and they came a long way.”

Hopkins also said it was good to come in second place in state.

“We set this goal last year,” he said. “We knew it would be hard to beat Faith, but look what we did, we came within three strokes of beating them.”

Two years ago the Trojans were hitting in the 500s as a team. At state, in the first round they had their best round of golf for the year as they hit a 411.