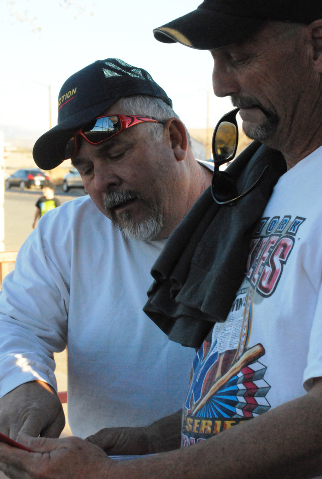 The game was strictly for fun and was held at Ian Deutch Field last Saturday at 4 p.m. The game was played in spring-like conditions and reminded everyone that baseball and spring is just around the corner.

Jennifer Greene and Charlotte Uyeno, two long-time Trojans baseball fans, helped organize the game and did most of the communicating through the Internet.

“Most of the communication was done through Facebook and we got a great turnout,” Uyeno said. Uyeno hopes this becomes an annual event.

The stands were filled with friends and family. Over 50 people came out to support local baseball and see the alumni that came out.

Carl Kaucky, a member of Pahrump’s 1976 team, was there supporting his son, Brent, who also is a Pahrump alumni. While Carl was not on the field, he was there to support Brent. Carl was a member of the first Pahrump Valley High School baseball team under Coach Rod Poteete.

The following is a list of former players who played in the game: