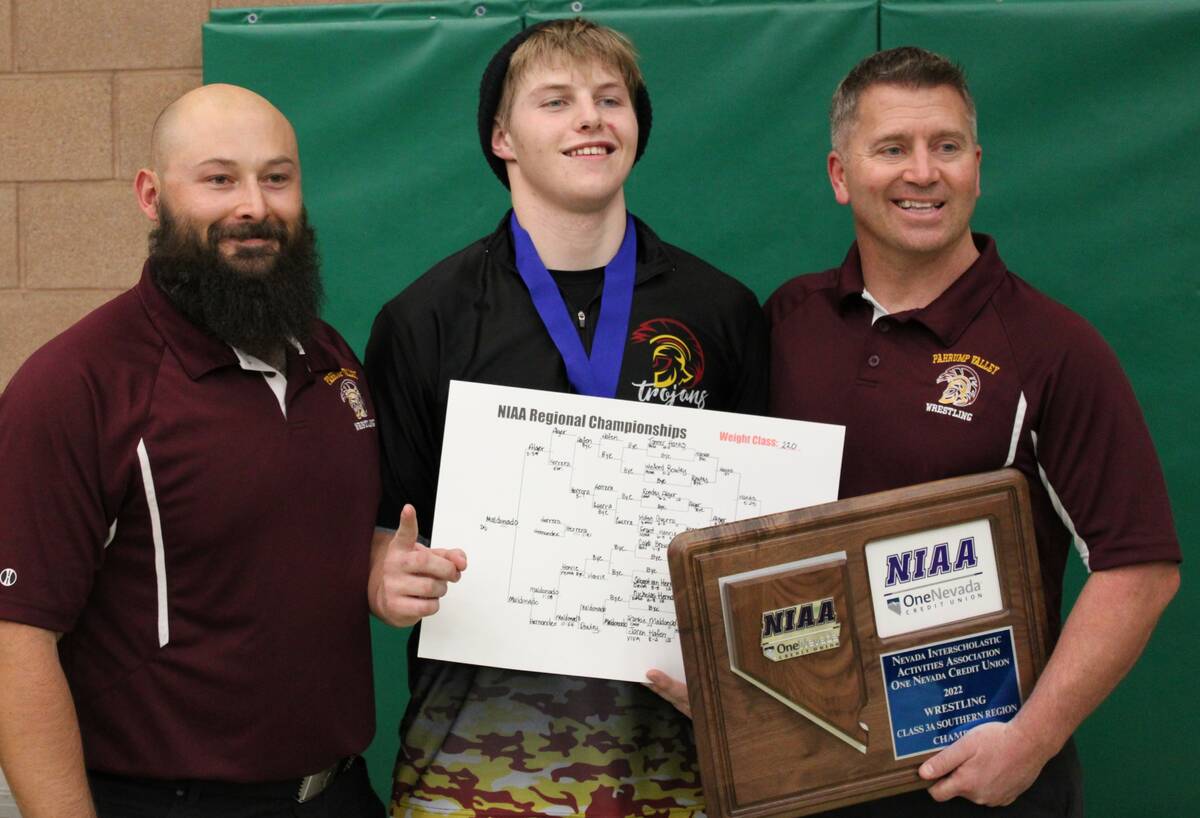 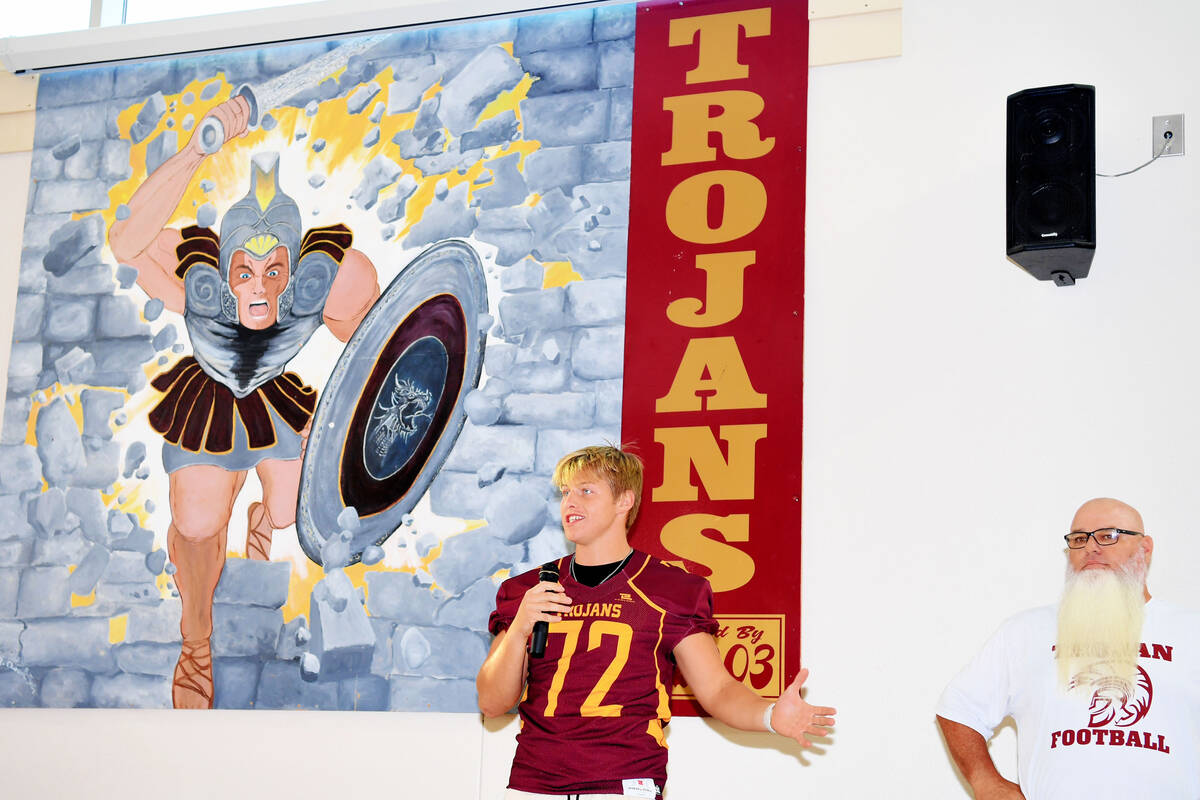 Peter Davis/Pahrump Valley Times Senior captain Tannor Hanks and head coach Thom Walker gave a speech before and after the pasta dinner and bake sale fundraiser to thank everyone in attendance for coming out and showing their support for the football program. 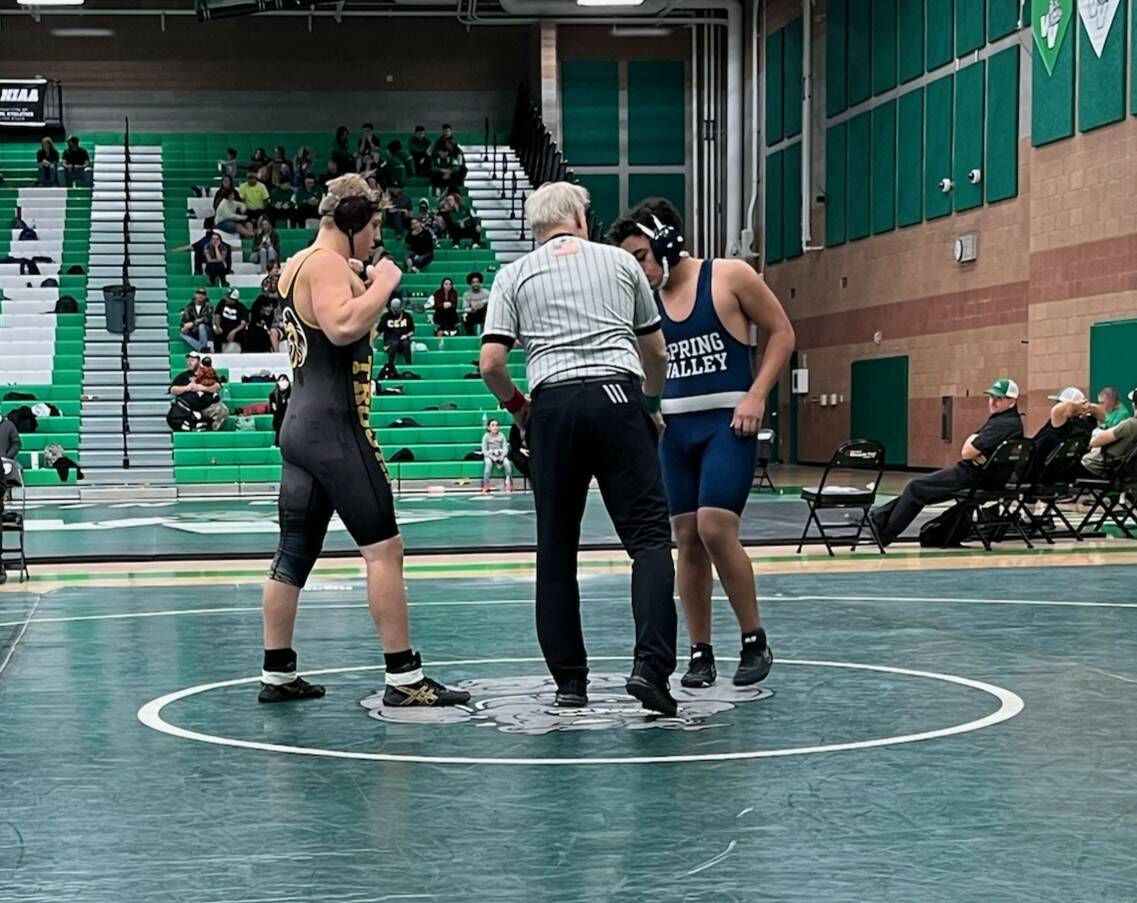 Special to Pahrump Valley Times Tannor Hanks (left) gets ready to take on his opponent at the 2022 Southern Regional wrestling tournament.

In the sports world at Pahrump Valley High School, he’s known as a tough wrestler and a hard-hitting football player. Before all of that, Tannor Hanks, along with his twin brother Ty Hanks, was born in the Summerlin area of the Las Vegas Valley.

Hanks lived the first 10 years of his life in the Summerlin section of the valley before moving to North Las Vegas during middle school.

While living in North Las Vegas, the Hanks brothers began their sports careers.

Tannor, along with brother Ty, began playing football during his sixth-grade year.

While at a gathering one afternoon, Hanks was introduced to one of the linemen coaches for the 702 Jaguars by a close family friend.

The Jaguars are the feeder program for the Desert Pines High School football team.

“Just based on my size, I already kind of knew I was going to be a lineman,” Hanks said. “I also wanted to be one just because of the physicality of the position.”

The Hanks family moved to the Pahrump area while Tannor was in eighth grade.

“It was a very big change,” Hanks said of moving from a big city to a small town. “But the people out here are very warming and easy to talk to. I like the small town because everyone knows each other and everyone helps each other. I love that aspect.”

He did mention that sometimes it’s a love-hate relationship, but admitted that it was most likely due to being a kid and having limited things to do around town.

Once Tannor got to high school, he began playing football for the Trojans. He continued to play as a lineman on both sides of the ball all the way through his senior season.

Just before the start of the season, newly appointed head coach Thom Walker made Hanks the team’s captain, an honor that he took seriously.

“It was very exciting,” Hanks said. “Also, I got very anxious when I heard it. Being a captain is a serious thing. Just from hearing the title I was nervous, but besides that I was excited and getting pumped for the season.”

His senior year didn’t go quite the way they wanted. The Trojans finished the season with a 4-5 record, missing out on the playoffs by just one game.

Hanks believes he handled his captain duties well, however, he did admit that he thinks he “probably could have done better.” He mentioned that the biggest fight of the season wasn’t on the field, it was off the field.

He took it upon himself, as most leaders would, to help his teammates keep their emotions stable and refrain from attacking each other when the team went through rough patches throughout the season.

Following each football season, Tannor has a few weeks off before he begins the biggest grind of the year – wrestling season.

What started out as something to help with football, turned into Hanks’ favored and most successful sport.

“After doing the sport, I fell in love with it,” Hanks said. “The fact that you can go out on the mat, it’s just you and your opponent. If you lost, that’s your own fault. If you win, that’s from all of your hard work. That’s what I love about it. If you don’t put in the work then you lose.”

In just three years, Hanks went from being a new wrestler to one of the top wrestlers in the state for his weight class.

In the 2021-22 season, Tannor finished the regular season with an undefeated 12-0 record and went into the regional tournament with the top seed in the 220-pound weight class.

Hanks would go on to pin all three of his opponents in the tournament to capture his first 3A Southern Nevada Regional championship and secure his spot in the state tournament.

“Relieving,” Hanks said of winning the regional championship. “My work finally paid off, but then my mind immediately went to state.”

In his first match, Tannor defeated his opponent with ease, getting a pin in the first round. However, in his second match, he would get pinned by the eventual class runner-up, Frankie Maldonado.

Hanks would be sent to the consolation bracket where he would pin both of his opponents on his way to a third-place finish.

“It was a great awakening to some of my flaws that I had from last year,” Hanks said of losing in the state semifinals. “This year I need to get quicker at changing levels and getting more aggressive with my takedowns and pinning combinations.”

It’s great to see someone at such a young age be able to see their own flaws, know what needs to be done to change them, then go out and work on changing them.

It remains to be seen if all of Hanks’ offseason hard work will pay off this year, his senior year for the Trojans’ wrestling program.

He’s currently trying to get ahead of the game by reading books about investments and real estate.

In the food department, he may love eating more than cooking. One of his favorite dishes is his grandma’s chicken broccoli casserole.

“I know how she makes it,” Hanks said. “When she makes it, it tastes better than how I make it. I don’t understand how. She just has that spice, I guess.”

He credits being able to start from scratch and making something that other people enjoy to eat as one of the main factors that makes him like to cook.

After high school, Tannor plans to go to college. He’s hoping to get a scholarship for wrestling, but if that doesn’t work out then he may go into the military.

He’d like to go into the sports medicine field and would like to possibly become an athletic trainer at the college or professional level.

You can catch Tannor and the rest of the Pahrump Valley wrestling team in action this winter. Their season kicks off with a home meet on Tuesday, Nov. 29. The Trojans will be going up against the Valley Vikings and the Chaparral Cowboys.