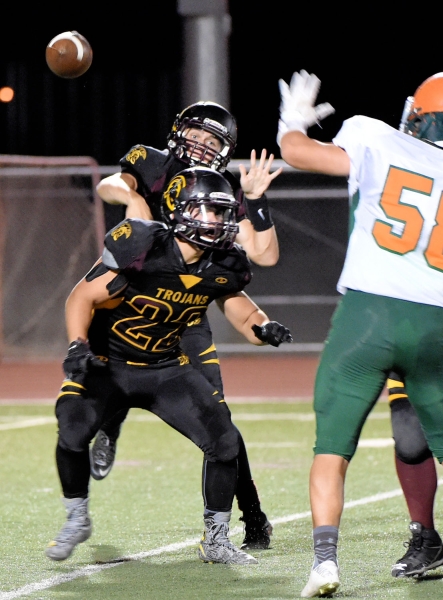 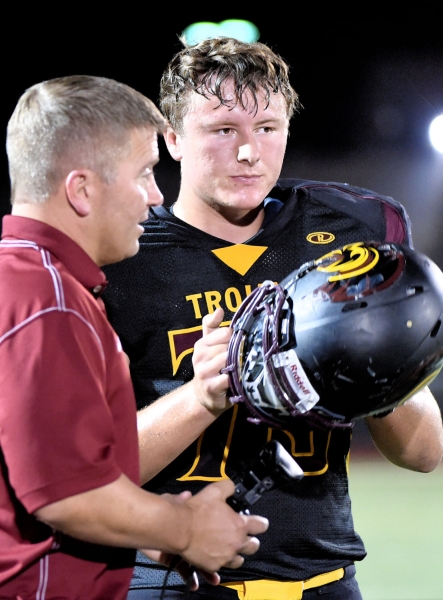 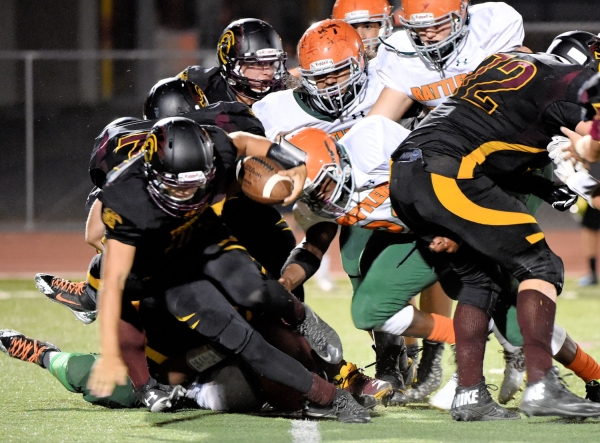 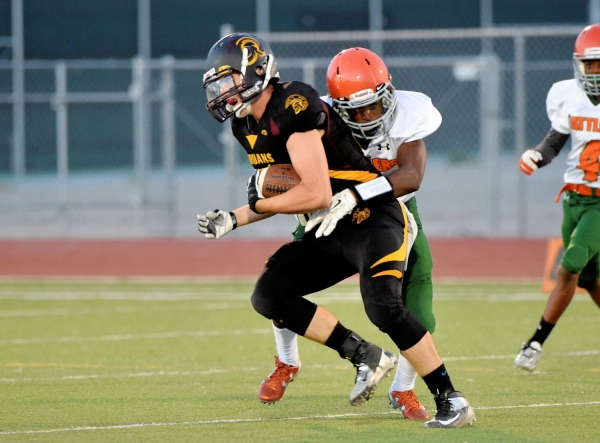 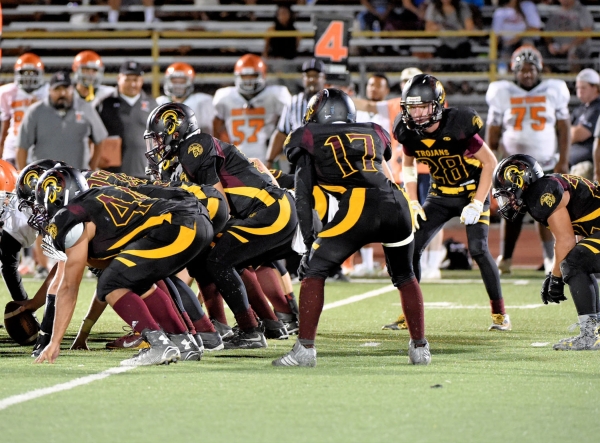 The highway patrol says “speed kills” on the highways and the Trojans found that this also applies to football.

Pahrump ( 1-2 overall, 0-1 Sunset League) was blown out by Mojave 40-7 last Friday night in a game that at times looked more like a track meet than a football game. Mojave (2-1 overall, 1-0 Sunset League) came in with a fast quarterback and some quick running backs that could really turn the afterburners on once they turned the outside corner.

Trojans coach Adam Gent said it comes down to scheme when you are dealing with talented and fast teams.

“The defense has got to force the ball inside,” he said. But Pahrump couldn’t do this.

Gent believes Mojave to be the team to beat in the conference.

“This Rattler team was sound,” the coach said. “Mojave is the best school we will face this year.”

In the first half the Trojans offense was scoreless and had a hard time warming up.

Pahrump received the opening kickoff to start the game but ended up punting.

The Rattlers also had problems with penalties on their first drive and punted it away.

In their second series, the Trojans went to fourth down and tried to convert a fourth and three in their own territory with a QB sneak, but that was stuffed. Lucky for Pahrump, Mojave took the ball to the 7-yard line and fumbled.

The Trojans then went three and out after taking over the ball and punted. The quarter ended in a 0-0 tie.

The Trojans then went three and out and punted.

Mojave scored their second TD on a QB keeper on the first play after the punt. They took the ball in from their own 35-yard line into the end zone to make it 13-0.

After the kickoff, the Trojans tried to convert another fourth down play in their own territory. It was fourth and two yards to go and the Rattlers took over on downs on the Trojans 37 and drove the ball to the Trojans 8-yard line but couldn’t convert.

Pahrump then brought the ball out to midfield, but threw an interception at midfield.

Mojave answered with a minute to play and scored their final touchdown of the half to make it 21-0.

In the second half, the Trojans defense came alive and caused Mojave to turn the ball over on downs on the Trojans 32-yard line. Pahrump’s offense drove the ball 68 yards for their only TD. In that drive the Trojans converted two-fourth down receptions, one was by Jesse Dillon for a first down that kept Pahrump going and the other was by Parker Hart for a five-yard TD reception to make it 21-7.

The Trojans then stopped Mojave with 1:52 to go in the third but the offense couldn’t get anything going and had to punt.

Mojave scored on the next drive to seal the win and make the score 28-7.

The Trojans looked as if they would score again but fumbled in the red zone and the Rattlers completed a 94-yard pass for a TD to make it 34-7.

Pahrump threw another interception and Mojave took advantage of that and scored their last TD.

Gent said before the game that for his team to win they had to do better on ball security, but the team had problems with that. The Trojans coughed up the ball four times at crucial times during the game.

Bright spots: Trojans receiver junior Aaron Fuentes had a big reception for 34 yards and a total of 61-yards receiving on the night. Junior Parker Hart also had a decent day with 50-yards receiving. Senior quarterback TJ Milk, despite the interceptions, threw for 152 yards. Rushing wise, the Trojans had 78-yards rushing, mainly from senior Tommy Gascoigne.

“I am not worried about TJ Milk, we are making adjustments and had a good film session with him. He is learning. I don’t think he needs any confidence building, but just getting the quick game down, that’s our best weapon,” the coach said. “Also, Tommy Gascoigne is coming along. He knows he has to find the hole better and I think he is seeing the holes better. We got the blocking and now we need to hold on to the ball. We’ve got to perform and execute.”

The Trojans travel to Western (0-3 overall, 0-1 Sunset League) to hopefully gain some confidence. Western is winless in three games and really shouldn’t give Pahrump any trouble. Action starts at 7 p.m.

Pahrump’s next home game will be against Clark on Sept. 25.