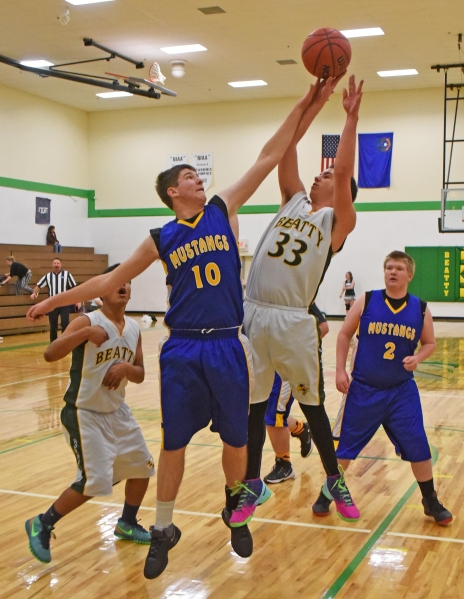 The Beatty boys basketball team bounced back from their last Tuesday loss to Round Mountain, 75-68 and beat Sandy Valley 58-38 on Friday. The Hornets (10-9 overall, 4-4 Division IV Southern) are hoping to keep their playoff hopes alive and find themselves in a must-win situation as they are tied with Beaver Dam (7-8, 4-4). The Diamondbacks would go to the playoffs if the season ended today because they beat Beatty earlier. So to make the playoffs Beatty needs to beat division leader Word of Life (14-3, 9-0) which was on Tuesday night and was past deadline or last year’s state champion Spring Mountain (9-7, 5-2) at home on Thursday at 4 p.m. Spring Mountain sits in fourth place and the only games they lost were to Word of Life and Adelson School. Beaver Dam has the softer schedule, but still needs to beat the fifth place Round Mountain team on Friday and then Tonopah on Saturday (both games are at home).

Hornets coach Steve Sullivan says his boys are up for the challenge.

“I feel good because like I told you last time, even though the odds are against us these boys continue to work hard and never give up,” he said. “Coming out with a win this week is very much possible but we have to believe that is possible and we have to be willing to work.”

Sullivan said to guarantee a spot his team will be going for two wins.

“If we only win one then we are setting ourselves up to end in a tie with a team that has the edge because they beat us,” Sullivan said. “We have absolutely nothing to lose at this point because we are sitting at 7th place and no one is expecting us to move up because we have two of the toughest teams in our division statewide. We know we are the underdog in both of these games, but if Word of Life and Spring Mountain want to win it then they are going to have to earn it … we will have to earn it.”