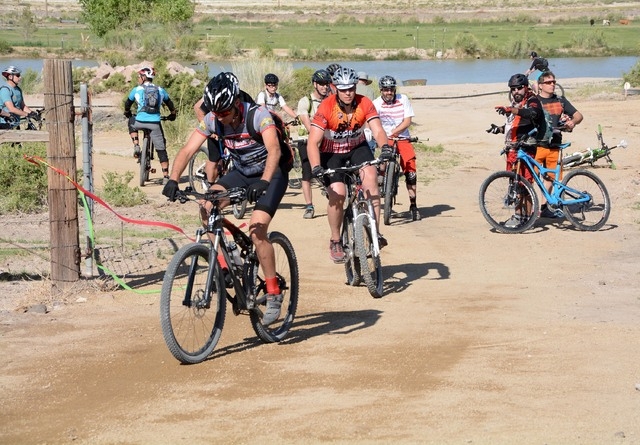 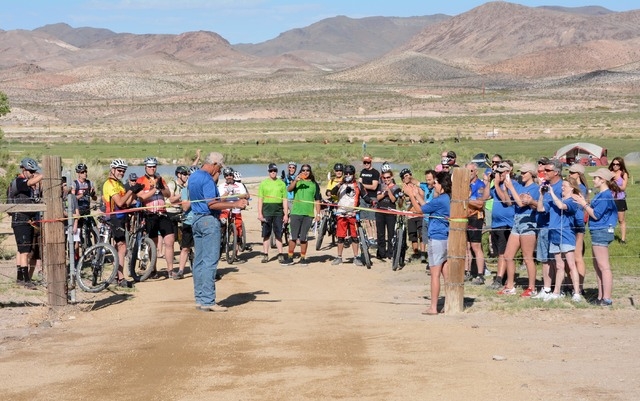 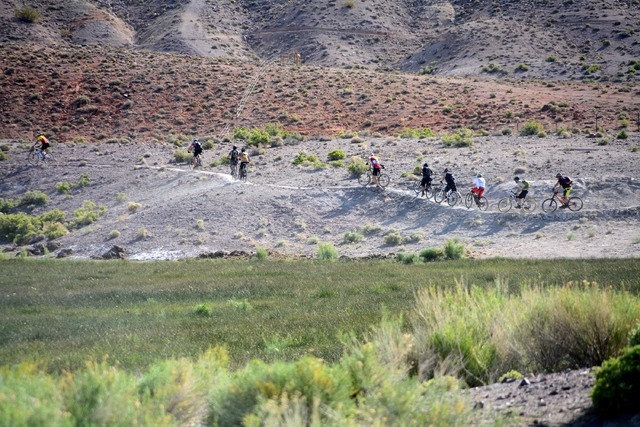 On May 2, Beatty had their first mountain biking festival to commemorate the opening of over 25 miles of new trails.

The Beatty Beer and Taco Mountain Bike Festival did well according to Beatty Trail designer, Cimarron Chacon of Gro Promotions.

“Yes the festival was a great success,” she said. “I believe there was around 100 people in attendance throughout the weekend.”

The beer was flowing, but more importantly to David Spicer, president of Saving Toads thru Off-Road Racing, Mining and Ranching in Oasis Valley or more commonly called STORM-OV, the riders were flowing too. The majority of the people at the festival came fully prepared to tackle all the mountain biking trails that Spicer had to offer.

Carl Irwin, owner of Irwin Cycles in Las Vegas, who has been riding for 20 years, said he closed his shop down for the first time ever for this festival.

“I have heard so much about the trails that we just closed shop and we normally only close on holidays,” he said. “Fourteen of us went. We were promoting this big. I must have seen at least 40 riders there that I knew.”

Irwin said he was used to riding in and around the desert in Las Vegas.

“I was pleasantly surprised. The trails were better than expected,” Irwin said. “Around Las Vegas there is desert and no scenery, but on Spicer Ranch there are these green belts that just add to the ride, making the scenery beautiful.”

He really liked the area and he said this destination definitely has potential.

“This place can be as good as Fruita, Colorado (a destination that changed its economy due to mountain biking). This destination is headed by people who really know what they are doing.”

Irwin explained some places he has been to really didn’t understand the construction of trail building. He said Spicer and his group do.

“Spicer’s organization understands dirt,” he said. “Because these people have been involved with mining, they have built good dirt roads and now apply this construction to building trails and this leads to building good trails.”

Irwin was so enthusiastic about Beatty as a mountain biking destination that he said he wants to someday help with organizing future events in Beatty.

“I know that Beatty is a work in progress,” he said. “I know they have a lot more work to go, but from what I have seen, I have no complaints.”

He said he talked to a lot of bikers up in Beatty during the festival and they all loved it.

Montville agreed with Irwin and said the place will be a great future destination.

One of the reasons he likes the Beatty location was because of its mining history.

“There really is no other place like this in southern Nevada for mountain biking,” Montville said. “The trails all had a destination and a story to tell.”

He explained most trails in and around Las Vegas just have trails that go to the top of a mountain and that’s it, but with Beatty the trails go to mining areas that are rich in history so there are historic things to see and explore as you ride.

“The designer designed trails that have a story to tell,” he said. “The trails lead riders to places of interest that are scenic and tell an interesting story. I really can’t name too many places like this.”

The association president said the trails are made so that all levels of mountain bikers can enjoy them. He said he is an expert rider and there were plenty of trails for him to enjoy.

“The trails were not too aggressively steep,” he said.

Montville says the infrastructure is not in the town yet, but it will be in a couple of years. He’s talking about hotel rooms and eateries and interesting stores that mountain bikers like to frequent.

This is great information for Beatty to know at this stage in the game, especially for those businesses banking on this project being successful. In the mountain biking community, information like destinations travel by word of mouth, so it’s good news that the cyclists are talking up Beatty.

Montville says that he can see in the early stages of development this area attracting good-sized festivals that could attract 500 bikers to the town.