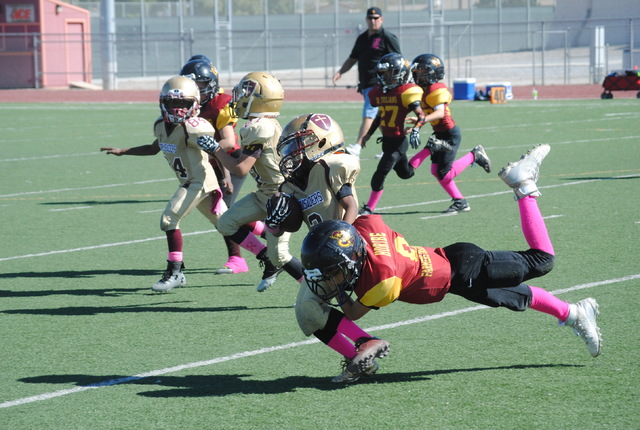 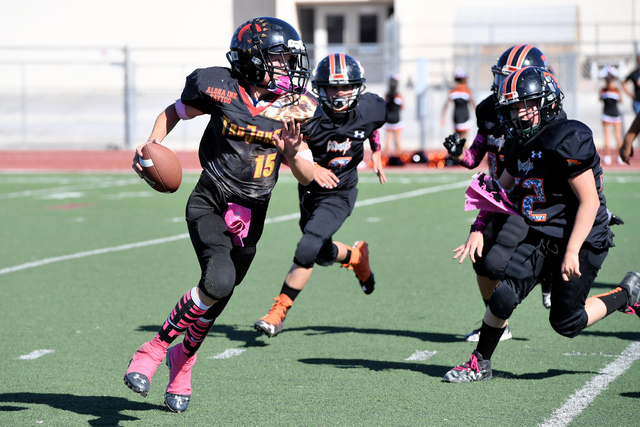 Peter Davis / Pahrump Valley Times The new Pahrump Valley youth football league, National Youth Sports, had four teams this year and was popular with the parents and organized, despite being a last-minute choice after Pahrump Pop Warner folded.

The new Pahrump youth football league has had a banner season.

This year was the first year that Pahrump youth football went with the National Youth Sports football league instead of Pop Warner.

According to Johnny O’Neal, the Pahrump commissioner for the league, the year went well.

“So far the season has been a success,” O’Neal said. “We were able to expand to four football and three cheer teams. We had two of the three tackle teams make the playoffs. The flag team is learning the basics of football and all the kids seem to be enjoying the experience. We hope to grow a little more next season. Possibly to have enough kids for a few more flag teams. Get some bigger kids on the 8u team, and replace the kids that move on to play middle school football.”

He added it was stressful because it was his first year in a new organization as the Pahrump commissioner.

O’Neal gave the PVT a summary on how the teams did this season.

The 8u Jr. Trojans, led by head coach Dean Capron, finished the regular season with a record of 1-6. His next game is at 11:45 a.m. on Nov. 5 against the Las Vegas Broncos. The games will be played at Desert Oasis High School.

The 10u division was made up of kids aged eight, nine and 10. Most of the kids were returning from last season as Pop Warner Mighty Mite Trojans. They finished the regular season 5-2 under the tutelage of head coach Ray Cortez. He took the job with one week before the season started. Their next playoff game is at 1:30 p.m. on Nov. 5, against the Diamondback Longhorns, at Desert Oasis.

The 6u flag team was led by head coach John Walker. They have three games left. Their season wraps up on Nov. 19 at noon. They play at Ed Fountain Park in Las Vegas.

O’Neal liked the way the parents were able to keep track of their kids team on the web.

“It was also awesome to read the reviews and previews every week on their web page,” the commissioner said.

O’Neal said things will run smoother next year and he plans on adding a board of directors to help with running things.

He said all the coaches will be getting together at the end of the season to determine if NYS is something they want to continue to do.

So it’s not set in stone that Pahrump will stay with NYS.

“There are other leagues in Las Vegas to explore,” O’Neal said. “So our options are open right now. But we feel good about our first season with NYS. They have two more levels of competition within each of the older divisions. So Pahrump has room to grow if we decide to stay.”

There’s a coaches’ clinic in April and he hopes to have the second annual youth football camp in late May.

“We will be posting all events on our Facebook page, Pahrump Valley Jr. Trojans Football and Cheer,” he said.