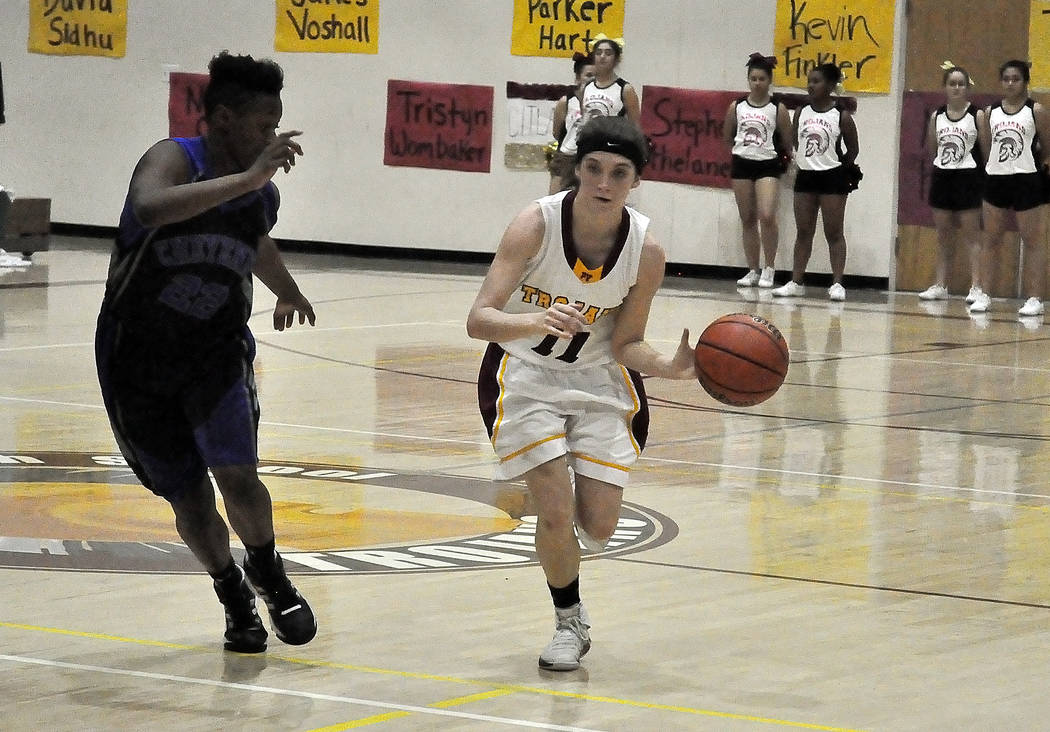 Horace Langford Jr. / Pahrump Valley Times Bethany Calvert is seen driving the ball this year against Cheyenne. She lettered in basketball and volleyball. Calvert was honored on Monday as an NIAA Southern Nevada Top 10 athlete of the year. 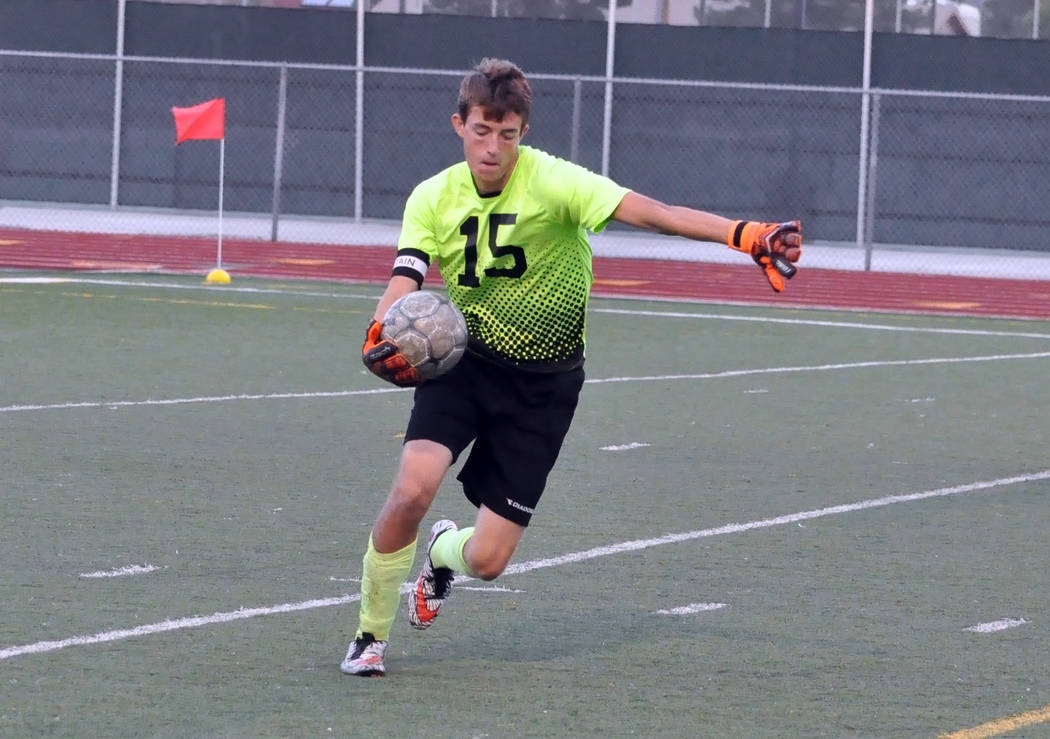 Horace Langford Jr. / Pahrump Valley Times Trojans Nick Harris, seen handling the ball, was the goalkeeper for the past two seasons. He lettered in soccer, basketball and track. Harris was honored Monday night as an NIAA Southern Nevada Top 10 athlete of the year.

Bethany Calvert and Nicholas Harris were honored as two of the Southern Nevada Top 10 student-athletes of the year and Trojans coach Bob Hopkins received an award for the NIAA model coach of the year.

Hopkins currently coaches girls basketball and boys and girls golf. He has been coaching for 41 years.

“I was honored to get it,” he said. “I put in so many years of coaching that they decided to give me an award.”

The Trojans athletic department had this to say about him in a letter to the NIAA nominating him for this award:

“His teams have also earned a total of 10 National Association of Intercollegiate Athletics state academic championships. While very competitive, he conveys to his student-athletes that they need to compete in every aspect of their life to be as successful as they can be. This includes in academics and in being a quality person. As a testament to his success, he has been inducted into both the Bennett County High School (South Dakota) and the Pahrump Valley High School Halls of Fame. He is nearing 500 career wins in girls basketball and has countless other wins in boys basketball and girls and boys golf. One of the greatest qualities that we value in Hopkins is his vast experience and he is highly respected by other coaches. He serves as mentor to our entire coaching staff at Pahrump Valley High School.”

For the NIAA top ten student-athlete of the year award, the NIAA chooses 10 students from the Southern region and 10 from the Northern region, five boys and five girls from each region.

The award is given according to the NIAA, “to not just the top high school athletes in the Silver State but rather to those student-athletes who exemplify total school and community involvement. Special consideration in the selection process is given to student-athletes who participated in multiple sports, other school and student government activities, and community service projects while at the same time maintained a high academic status within their school.”

The recipients also received a $500 scholarship courtesy of the Southern Nevada Toyota dealers; a souvenir portrait, courtesy of Lifetouch Photography; a top 10 souvenir newspaper edition courtesy of the Las Vegas Review-Journal and the Reno Gazette-Journal; and an NIAA courtesy card.

Harris said the whole process wasn’t too difficult. He had to fill out the application and write an essay on his sports and contributions to the community.

“It wasn’t too hard, sports have been a big part of my life,” he said. “It feels good to win and it’s nice to win.”

“Nick has done a good job and definitely was deserving of the honor,” Icard said. “There were certainly other athletes deserving of this award too, Nick just wanted it more.”

Hopkins was Calvert’s basketball coach and had this to say about his player, “It’s awesome, she deserves it. She is a great student, great athlete and a hard worker. She is a great kid and she should be honored.”