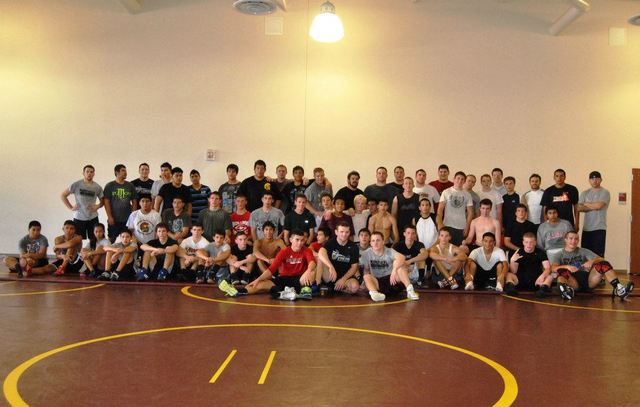 Charlotte Uyeno / Pahrump Valley Times This picture was taken of the entire group that gathered in 2012. It's rare that the newspaper gets these photos because our photographers are usually with family. Charlotte happened to go that year. 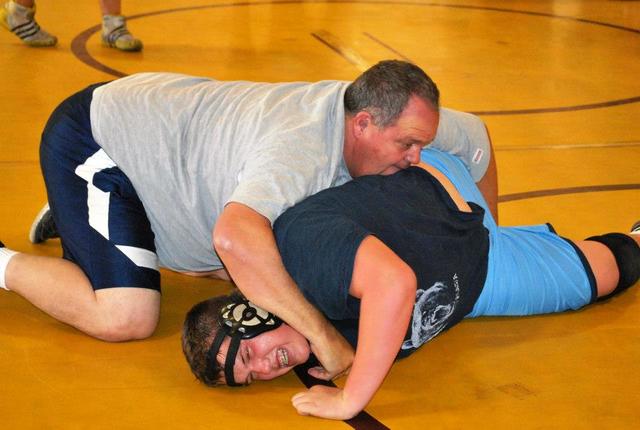 Charlotte Uyeno / Pahrump Valley Times Kyle Daffer wrestles with his father Marty Daffer. Marty Daffer was on the first wrestling team the Trojans ever had post 1974. Kyle Daffer graduated in 2014.

Every year they come. They never have to be told to go they just do it. It’s no secret and it’s an open invitation.

This annual tradition by the Trojans wrestling team is in its 22nd year and it occurs every year on Thanksgiving Day from 9 a.m. to 10 a.m. The reunion of sorts packs the wrestling room with bystanders and former wrestlers.

“It’s a chance for current wrestlers to check their weight before the big meal and we have a light workout,” Trojans coach Craig Rieger said. “What makes it special is that a lot of the wrestlers from the past show up too. I really don’t know who will show up but these guys get back in Pahrump for family and they just go to the wrestling room.”

He said it is a good reunion with past wrestlers.

“Of course they come in and always say that I am getting soft,” the coach said.

Rieger spoke of some of the visitors he had from the past.

“Erich Madson has come in the most,” Rieger said. “He lives in California now. He was a first-team defensive tackle, second in state in wrestling and a valedictorian. He… would call me every Thanksgiving and Christmas.”

Then there is Frank Lopez.

“I love telling his story to everyone,” Rieger said. “He was an awesome wrestler. He started off as this short, fat boy freshman, who just moved to Pahrump from California. He had a 4-33 record to start. His four wins came from forfeits so he never really won on the mat, but he never missed a practice.”

Rieger said this wrestler continued and in his second year he was 23-23 and second at zone. He kept on improving and in his junior year he was 47-5 and third at state.

Rieger had told this story so many times he had all the figures memorized, emblazoned on his head.

“In his senior year, he was 52-5 and was the regional champ and second in state.” Rieger said it like he was telling this story for the first time.”

He said Lopez went on to be an All-American and third in the nation. The coach said he is just one of the great wrestlers who comes back to the school and gives his time to his new wrestlers.

“It’s bonding, guys like to come back and tell their stories and just bond with the other past wrestlers,” he said. “It’s a shared past, something that they all have in common. Kind of like soldiers who go through special training. For some of these guys, this is the hardest thing they have ever done.”

Another interesting thing has occurred with this gathering, the coach said.

“I will also get parents coming in,” Rieger said. “I get parents of the wrestlers that want to catch up with other parents who they remember sitting in the stands or parents who wrestled and want to share their wrestling stories. So some moms would come in, like Pat Armendariz. She came in and would tell my wrestlers to work harder. If she thought they were slacking, she would kick them to get them to move faster.”

Derek Holzer is one of the wrestlers that comes almost every year and graduated in 2002.

“I come for the camaraderie and because it is like family,” he said. “I also want to see the next generation.”

He explained how he got out of the house on Thanksgiving Day.

“My wife has no problem with me spending my Thanksgiving morning with the wrestlers,” Holzer said. “I had to explain it to her at first but she knows Rieger and she knows how important this was to me. She understands. If you have wrestled, you get this and a lot has to do with the coach.”

Elliot Owens graduated in 2011 and has come ever since.

“It’s a family affair,” he said. “My parents go and we all catch up with friends.”

He said some guys like to get down with the new wrestlers.

“To do that though you’ve got to be in shape,” Owens said. “I have gone down on the mat and never have hurt myself yet. I just tag team with others if I get tired. To me, to go is like a reunion.”