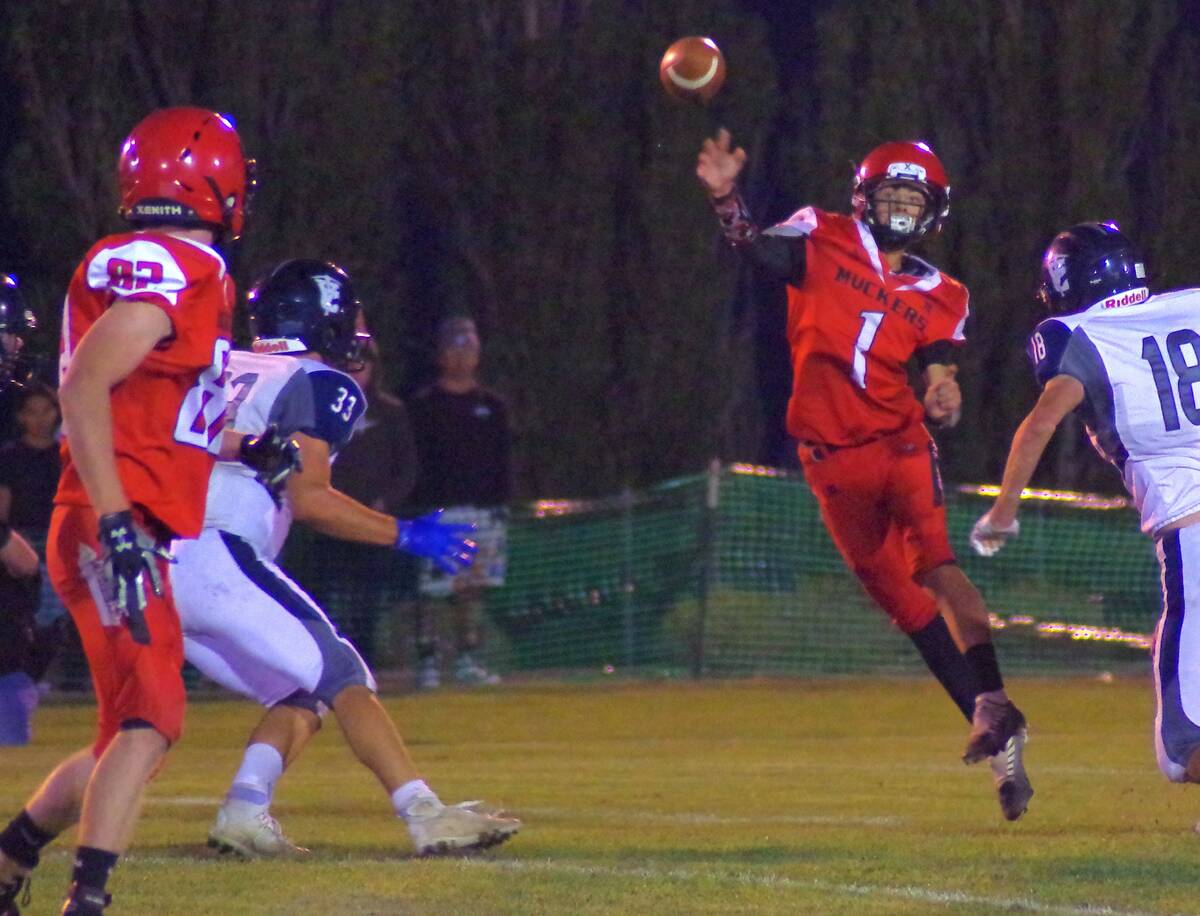 Marcus Prazniak/Tonopah Times Sophomore quarterback Drew Otteson (1) looks to pass down the field to one of his receivers during the Muckers' game against Virginia City on Friday, Sept. 16.

Sophomore quarterback Drew Otteson had his third consecutive game with over 300 total yards.

Otteson completed 16 of his 20 pass attempts for 196 yards and two touchdowns. In the ground game, he added another 134 yards on 20 carries, giving him a total of 330 yards for the game.

Juniors Samuel Nichols and Thomas Newell each caught a touchdown pass from Otteson. Nichols caught two passes in the game for 49 yards and Newell caught four passes for 62 yards.

Mitchell Miller was his typical standout self. He ended Friday’s game with 15 rushing attempts for 94 yards and a touchdown. He also had eight catches for 59 yards.

Once again, Miller led the Muckers in tackles on the defensive side of the ball. He has led Tonopah in tackles every game this season and has had double-digit tackles in five of the team’s eight games.

This was a much-needed win for the Muckers as their season is coming down to the end and they’re fighting for the last playoff spot in the 1A Central league.

Tonopah is currently tied with Mineral County for the second spot in the central league. They each have identical league records of 2-1, however, the Serpents hold the head-to-head tiebreaker over the Muckers after coming away with a win in Tonopah at the end of September.

The Muckers only have one game left on their schedule. They’re off this week, but they’ll return to action next Thursday, Oct 27, when they travel to Alamo to take on the Pahranagat Valley Panthers.

Tonopah will need two things to happen in order to make it into the playoffs. They’ll need to defeat the Panthers, and they’ll need Beatty to knock off the Serpents.

If both of these happen, the Muckers will head into the playoffs with a 3-1 league record and the Serpents will be sent home with a 2-2 league record.

Head coach Duffy Otteson and his staff have a week and a half to prepare for the Panthers in hopes of making it back to the playoffs after missing out last year.

The Muckers game against the Panthers is scheduled to kick off at 7 p.m.