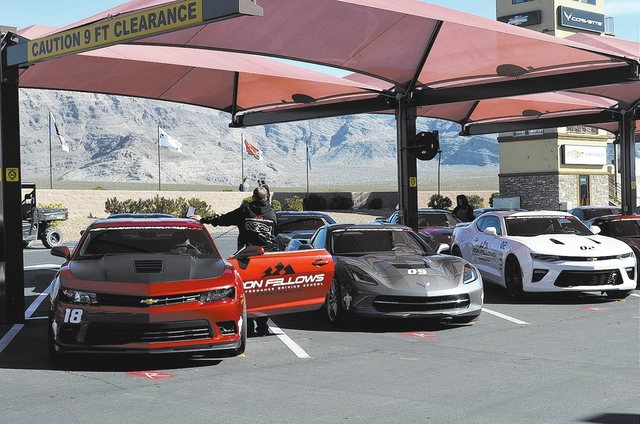 Daria Sokolova/Pahrump Valley Times Spring Mountain Motorsports Ranch located along Highway 160 in Pahrump is poised to become the longest race track in the world after Nye County commissioners approved the purchase of 600 additional acres of public land adjacent to the property.

Spring Mountain Motorsports Ranch is set to become home to the longest racetrack in the world after Nye County commissioners gave the go-ahead to purchase an additional 600 acres of public land.

The facility on South Highway 160 received the endorsement of Nye County to purchase approximately 600 acres adjacent on the north and east sides of the property.

The land will be purchased from the U.S. Bureau of Land Management through a competitive bidding process. Nye County agreed to authorize sending a letter to the BLM supporting the sale of the public land.

Russ Meads, of Double M Construction, who serves as a consultant for Spring Mountain Motorsports Ranch, said that the process takes 18-24 months, and at the end, the 600 acres will be ready for purchase.

“Once it’s available for purchase, Spring Mountain Motorsports Ranch is hoping to purchase it for expansion of the driving school,” Meads said.

Nye County Commission Chairman Dan Schinhofen said that the facility has had an “immensely positive” economic impact on Nye County.

Nye County is currently in the process of amending its development agreement with Spring Mountain Motorsports Ranch and master plan to reflect the addition of the extra land for the racetrack, according to the documents.

After purchasing the land, Spring Mountain Motorsports Ranch plans to bring the construction plan to the county and obtain all of the necessary permits.

“It will get a lot of national and international attention,” Meads said about the proposed expansion.

The prior land sale to Spring Mountain Motorsports Ranch was done under the modified competitive bidding procedures for 120 acres of public land designated for disposal in the 1998 Resource Management Plan, according to the documents.

The requested 600 acres is not designated for disposal in the 1998 plan, and as such, amendment of the 1998 plan will be necessary, according to the documents.

Spring Mountain Motorsports Ranch also said it will work with the BLM to avoid or minimize conflict with the alignment because of the nearby proposed west-wide energy corridor.

Plans call for construction of retail stores, a hotel and a movie theater on the property.