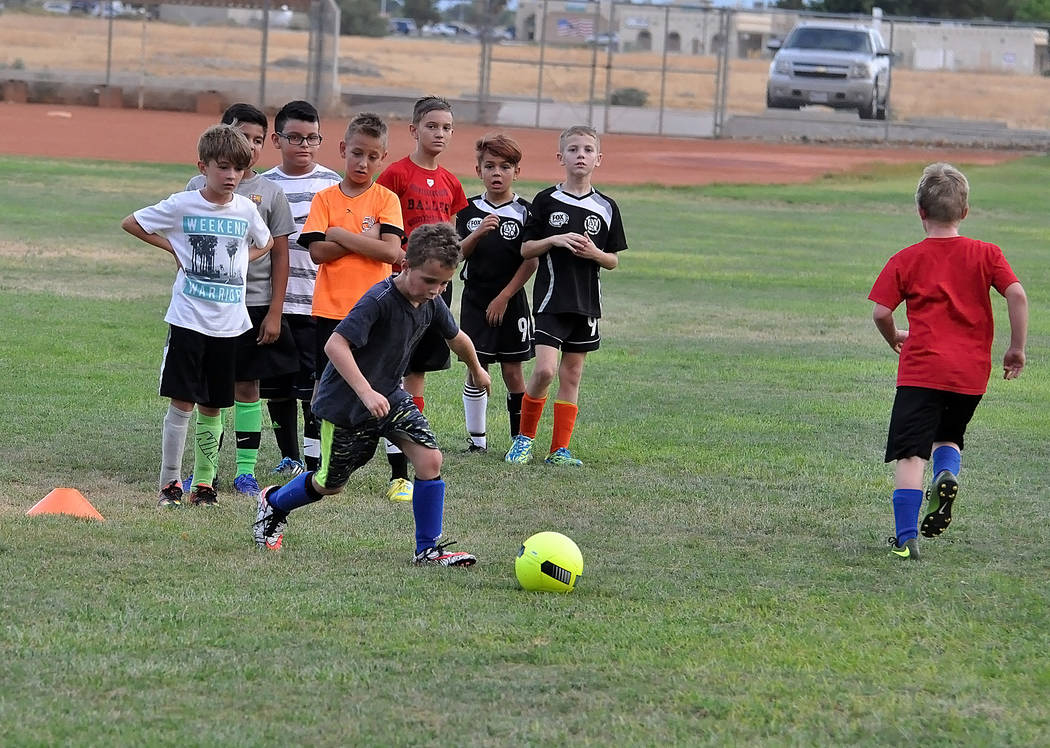 Horace Langford Jr./Pahrump Valley Times Boys from a club team participate in a free clinic at Ian Deutch Park last Thursday. Club soccer has exploded in Pahrump. The valley now has six teams and over 100 kids. 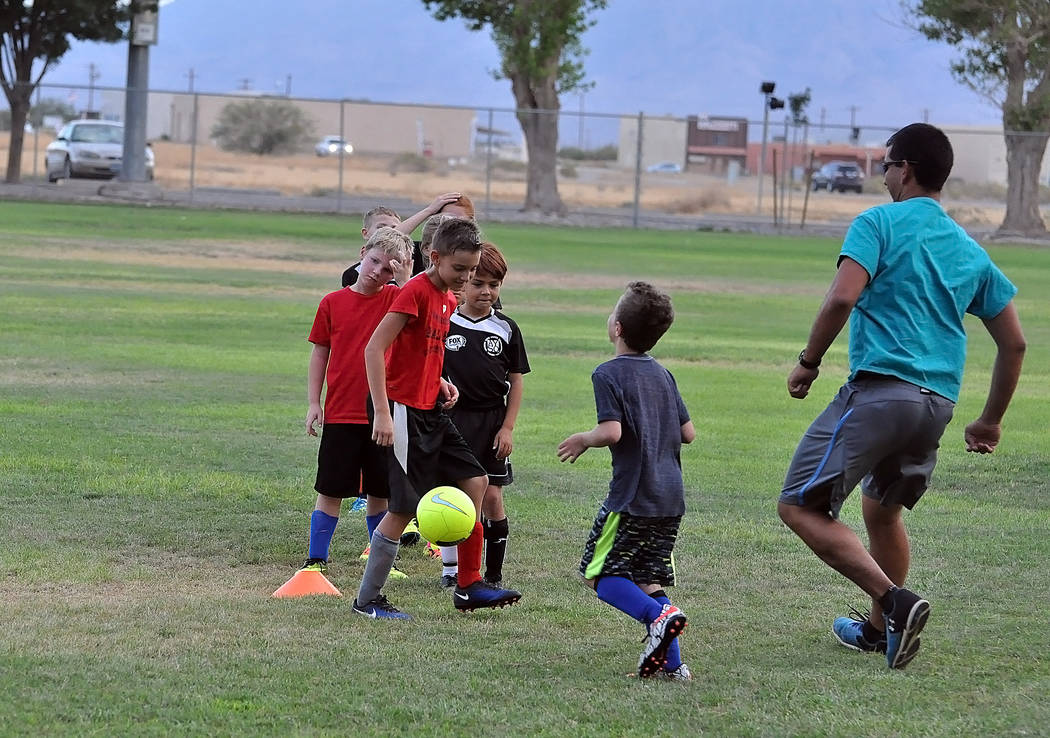 Horace Langford Jr./Pahrump Valley Times Middle school teacher Armando Veloz gets a workout at Ian Deutch Park last Thursday with some of the kids that will be playing club soccer this year. The ages for club soccer range from eight to 14 thus far but the coaches are looking to expand to more teams. “We have kids on the waiting list, waiting to fill a team,” said Casi Lamp, a club soccer coach in the new league.

Club soccer numbers have exploded in Pahrump to 100 plus kids and six teams in the valley.

In past years these numbers have been small because parents didn’t want to travel into Las Vegas.

When Pahrump Valley High School girls soccer took state in 2011 and 2012 the amount of club soccer girls could be counted on two hands. The assistant coach of the Pahrump Valley soccer team was Joe Sladek and he religiously took about eight to 10 girls into Las Vegas for several years saying it was the only way to be competitive with Las Vegas teams who had been preparing kids for high school soccer for years in the same manner.

His daughter, Sydney Sladek, started off in AYSO and then graduated to club. She now is a senior midfielder for the University of Southern California Trojans women’s team. Last year, USC won the national title in women’s soccer.

Who is behind the push for club soccer

According to Casi Lamp, one of the new club soccer coaches, the explosion is due to Danny Coleman, who coached a U12 team for the Silver State Soccer League last year. His success has prompted four more teams to start up this year.

Coleman also gives credit to Shawn Holmes, another club coach that coaches in the same soccer league, the Silver State Soccer League in Las Vegas. Before the explosion, Coleman was coaching younger kids and Shawn Holmes had been coaching the older kids in middle school.

According to Coleman, about half of Holmes’ kids are entering high school this year. His team has been playing together since they were eight and should make a huge impact on the varsity team in the coming years.

A new league has started

Dusty Park, a new club soccer coach, says he left AYSO to start this new league because he wanted a more competitive league.

“I am starting club soccer this year,” Dusty Park said. “We talked about it last year. In this league, they don’t change teams every year and you can leave them together and so when they get to high school the team is already formed. I am sure Danny will keep going all the way to high school and he has a younger daughter coming up through the ranks. The coaches feel that eventually all the girls coming into the high school will have club soccer experience.”

The start-up of the four new teams has prompted the start of a new league in Pahrump. One of the league organizers is Kelli Hall. She said the league has kids from eight to 14 and they still can take more.

“We are registering more kids for this league and we are calling it Pahrump Junior Trojans Soccer League,” Hall said. “We will be having registration from noon -2 p.m. at Petrack Park on August 12. The games are bi-weekly in Las Vegas.”

And the league will play in the Silver State Soccer League, which has been around for about 30 years, according to their website.

She said the cost of registration is $100 and there is a uniform cost of $55.

“This will be the first time we have this many kids,” Hall said. “We are about 100 kids now. I was a U10 coach in AYSO and I wanted something better.”

The community needs this

“My girls have been playing soccer since they were four years old and for the younger kids AYSO is great,” Lamp said. “I think club soccer better prepares kids for the realities of high school soccer. Club is more competitive. Not everyone gets a trophy in club. It’s great they do in AYSO but at some point you have to leave that behind.”

Lamp says club soccer is a bigger commitment, there is travel and it takes more time.

“With the older kids, we just want to make them better,” she said. “Danny saw the need to do this with his own kids and he has been behind this movement.”

James Bohn, who also one of the new club soccer coaches, said the sport is growing.

“Soccer kids are looking for something more competitive, along with parents,” Bohn said. “Something more player-oriented where they can develop more as players for high school. You can’t develop in AYSO because you return to a different team each year. With club soccer you push forward, it’s not a three-month deal and it’s over. It is focused on long-term goals and you stay together as a team.”

Bohn said the team will have about 12 to 19 players. He also said there are less rules governing who plays, whereas AYSO has strict rules saying that all must play. He said club has a different philosophy and is not a recreational league.

“Club is based on output and effort,” the coach said. “No one is guaranteed play time. This increases the drive for players to continue to play harder.”

But along with this promise to develop your child as a soccer player and get them ready to play in high school, there comes a bigger commitment from the parents.

“You commit to a full year of showing up for practice two days a week and games in Vegas, tournaments and out-of-state travel,” Bohn said. “I was super impressed by the response by parents, when I decided to branch off from AYSO. It was amazing to see the response from the community.”

Bohn has no problems with AYSO and appreciated all the years his kids played in their league.

“I would say my kids are outgrew AYSO,” he said. “It’s great for developing the love of the game and once they develop those skills and want to get better and develop more skills, they need to take that leap into club and continue to develop.”