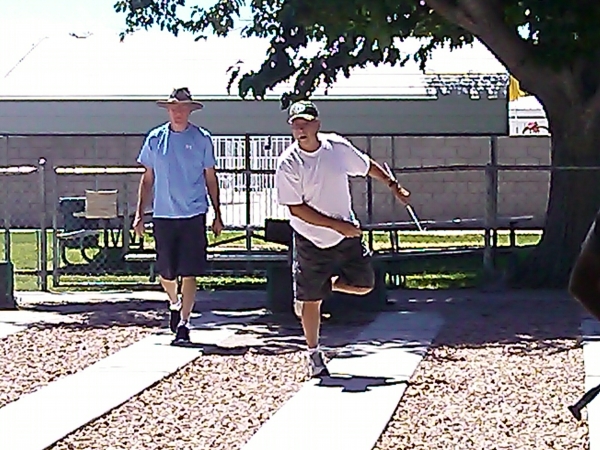 Mike Norton, the tournament organizer, said it was one of the best sanctioned tournaments in a long time.

“We had a great group that filled our courts. Ken Jose, the NHPA Central Nevada president, came in from Tonopah; several players came from Las Vegas and we also had a group from Reno. We had 15 people in it and it was the perfect number,” Norton said.

He said usually people from the North and South don’t travel to Pahrump.

Norton praised the barbecue held by Mike Nicosia during the tournament.

“He had fresh-roasted corn with vegetables from his garden,” Norton said. “And this just made the tournament that much more special. It just reinforced why people come so far to this tournament.”

The next tournament is the Nevada State Tournament in Hawthorne on Aug. 29. Players must be registered by Aug. 25.

The next big tournament for Pahrump is on Sept. 27 at the Fall Festival.

“Last year this was a big event and we had 25 to 30 pitchers,” Norton said. “My goal is to get more locals out there, even first-timers at this tournament. We will match everyone by skill level so you don’t need to be intimidated.”