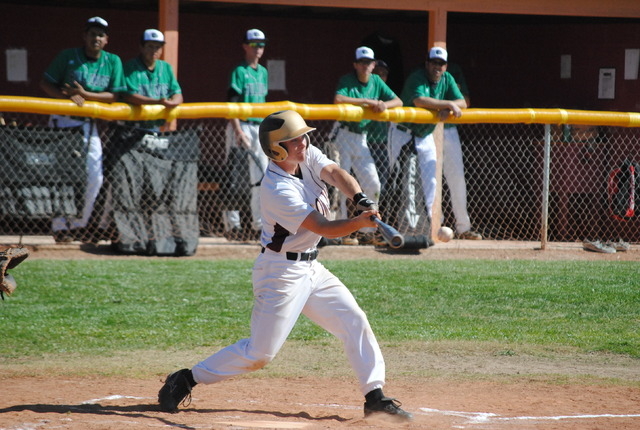 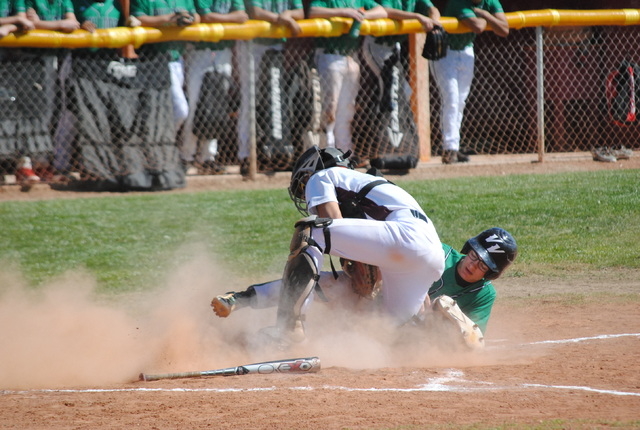 The Trojans baseball team went 3-1 at the Eldorado baseball tournament in Las Vegas and then on Monday they played Virgin Valley and beat them 12-3 at home.

The team played Southeast Tech and Lincoln County on Friday and then played Canyon Springs and Mojave on Saturday.

They then tied Southeast Tech 5-5. Josh Mortensen was the pitcher and he pitched six innings, gave up five runs and 10 hits. Carlos Rivera in that game had another good game with one hit, one double and 2 RBIs.

On Saturday Pahrump beat Canyon Springs 10-0 and then lost to Mojave 9-0.

In the Canyon Springs game, Tyler Greene pitched and faced 18 batters and gave up no runs and three hits with one walk. Greene and Aaron Fuentes both had doubles. Mortensen, Kral and Hart each had two hits. The team only had one error.

In the loss to Mojave, the Trojans ran out of gas in the pitching department, where they used four pitchers. Parker Hart pitched 1.2 innings, giving up two runs and two hits. He had three strikeouts. John McDonald then pitched 3.2 innings and gave up five runs and three hits. He had four strikeouts.

Drew Walker then came in and pitched .2 innings and gave up a hit and a double. Josh Ferrer was the last pitcher and he gave up four runs and three hits.

Overall Trojans Coach Brian Hayes felt his team pitched well and played good defense. He was pleased with Kral, Mortensen and Greene for going the distance and he felt Walker, MacDonald and Hart pitched well.

Dylan Ault, an all-conference second baseman didn’t play on Saturday and is out with an ankle injury.

Hayes believes his veteran hitters, Ault, Mortensen, Rivera and Greene all did well. These four players had only six strikeouts combined for the whole tournament.

“The majority of our players struggled at bat,” Hayes said. “We need some of our younger players to improve their approach at the plate. We struck out 40 times in 5 games.”

Hayes said he will use the next tournament on this Friday at the River Valley to see which batters can adjust at the plate.

“If we can get our bats going we could do very well this season,” he said.

On Monday against the Bulldogs Garret Lucas had a rocky start for the Trojans when he loaded the bases in the first inning, but he calmed down and was able to get out of the first inning unscathed. Lucas gave up no runs, had one hit and had three walks and four strikeouts. He pitched two innings.

While Lucas pitched, the Trojans defense was fantastic. In the top of the second they were able to get a double play at home plate because the infield was alert. In that play the ball was hit to the shortstop with one out, runners on second and third. The shortstop, Mortensen, then threw the ball to first for the force and Greene then through to Rivera for the tag at home to end the inning.

Mortensen pitched the last two innings and gave up four hits and three runs and had three strikeouts.

The Trojans got 12 runs on seven hits against the Bulldogs.