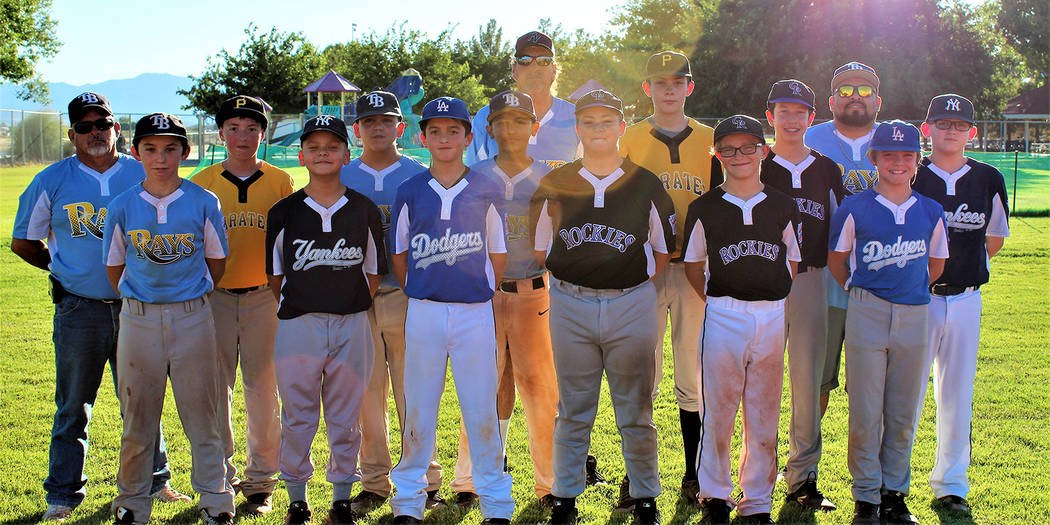 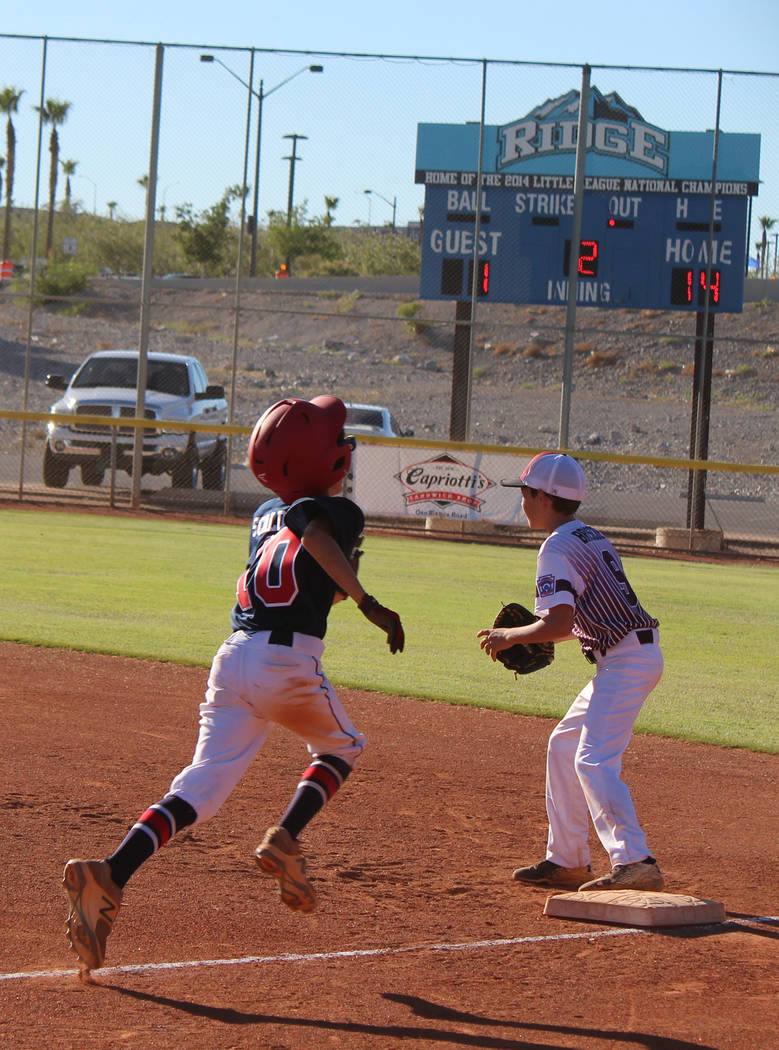 Caroline Thacker/Special to the Pahrump Valley Times Pahrump's 12-year-old Little Leaguers will travel to Mesa Park in Las Vegas to battle nine other teams for the District 4 championship.

Each year, Little Leaguers from Pahrump head to Las Vegas to battle teams that seem to feature taller, bigger, faster players that are drawn from much larger talent pools. Often, it doesn’t go all that well.

The P-Town Little League’s 8-to-10-year-olds and 9-to-11-year-olds went 1-4 last week at Mountain Ridge Park, with both teams eliminated in games ended early by the mercy rule.

“A lot of these kids we’re playing against, that’s all they do is play baseball,” said P-Town Little League manager Jason Sandoval, who will take Pahrump’s 12-year-olds to Mesa Park in southwest Las Vegas for the District 4 Tournament beginning July 7. “Out here, we’re all multisport players. You get a handful of kids that are playing all year round. It has started to get bigger, and that’s nice.”

“They’re not going to come in and walk all over these guys. It’s good feedback for the coaches, and we’ve passed it along to the kids.”

None of which changes the fact Pahrump takes something of a David-vs.-Goliath attitude into Little League tournaments in Las Vegas. To be fair, so do some of the other teams, because sitting in District 4 is a club that made it all the way to Williamsport, Pennsylvania in 2014. Mountain Ridge won the West Region championship to reach the Little League World Series, then scored 12-2, 13-2 and 8-1 wins to reach the U.S. final, where it lost to a Chicago team.

Mountain Ridge was declared U.S. champion after the World Series when it was learned the Jackie Robinson West Little League used ineligible players from outside its district. None of that matters as much as everyone knows that team is loaded pretty much every year, and two of their younger teams won district championships Monday night.

Sandoval said his players are well aware of all of that, and for some of them it came from personal experience.

“The only thing they really know is Mountain Ridge,” he said. “You saw them in the Little League World Series. And last year that was our first draw out of the gate. They’re all fast. They all have arms. They can all throw. Their coach said he picked his all-star team out of 120 kids.”

So what gives Pahrump’s team a shot in the tournament? Sandoval says there are several factors, including experience and versatility.

“It’s an 11- and 12-year-old team, but we take all 12-year-olds unless there’s an exceptionally good 11-year-old player,” Sandoval said. This year’s roster is made up of 13 12-year-old players. “Maybe five kids haven’t played tournaments before. The years prior, the rest of them have played one or two years.

“Every one of them has pitched in the league this year, so I’ve got 13 kids who can pitch the ball. When you go into a tournament like this, you better have some additional guys to throw in there. And every one of them has played infield. They’re all willing to adapt.”

P-Town Little League also will bring catching depth to Mesa Park, so on any given day Sandoval expects to have confidence in his battery. Fidel Betancourt is the No. 1 pitcher, and he will start at shortstop when he’s not on the mound. No. 2 pitcher Ricky Rayas also starts in center field.

Whittle, who also plays first base, brings one other attribute to the district tournament: “He’s as tall as some of the kids we’re going to be playing,” Sandoval said.

With the top two pitchers settled, and the entire roster able to take the mound if needed, Jason Sandoval has some help figuring out who should be on the field.

“Lance Dube is my pitching coach, and he works with all the pitchers and catchers,” Sandoval explained. “He works two or three guys a day in practice and works on their fundamentals and lets me know day to day who’s looking good.”

“One thing we try to do is coach the kids constantly,” Sandoval said. “If they go down looking or make a boneheaded error, I’ll ask them, ‘What did you do wrong?’ and then work to fix it. That’s all you can do.

“At this age, a lot of the kids, when they make an error, they beat themselves down. And you can’t do that. You have to forget about that play. We constantly give them feedback to keep their heads in the game.”