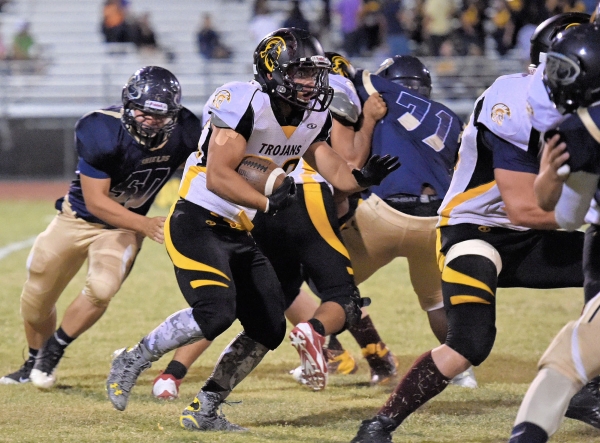 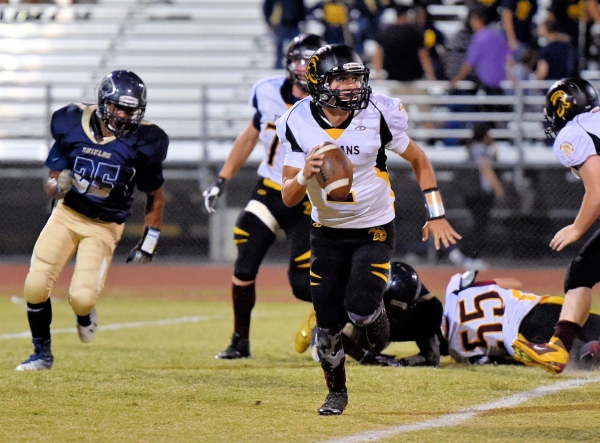 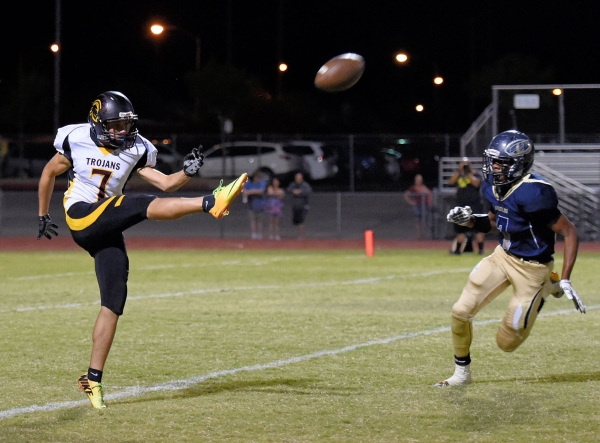 The Trojans football team had a really bad day on Friday and were taken out and hung to dry by a talented Cheyenne team 61-0.

But the season is not over by far. I am pretty sure we will make the playoffs. We have three more games left and the fourth place playoff spot is not yet filled. Faith Lutheran is at the top, second and third should go to either Mojave or Cheyenne.

Pahrump needs to beat Spring Valley this week and Sierra Vista, who they play their last game to get that last spot. Of course, it would be nice to beat Faith Lutheran at home next week too.

So why did we lose to Cheyenne so badly? Is our team that bad?

Of course not. We have talented players, but Cheyenne had some awesome talent that we could not beat that night.

The Cheyenne offense had Corwin Bush and David Walker. Bush is a wide receiver that was too quick for our defensive backfield. Walker is a running back, who also had a good night and was unstoppable.

Cheyenne ran a screen to Bush that the Pahrump defense couldn’t stop and so the Desert Shields saw this and ran it all night. Bush has speed and was able to put moves on our defense several times and let’s face it, he made the Trojans look bad. But, the Cheyenne receivers deserve the credit for the excellent blocking. I must have watched that screen play five to ten times to see what Cheyenne did and it was the blocking. I have never seen a team flatten our defenders like the Desert Shields did that night.

There is no substitution for talent and speed. Bush had it all that Friday. He was like watching Jerry Rice in his heyday, who also had a talent of making defenders miss in the open field.

Walker was also fast. He ran some plays up the middle and once he got into the open field he also put on some moves and was untouchable. He did this a couple of times near the goal line.

Add that to the incredible Cheyenne defense, who held our team to 50 yards total and that leads to a very lopsided game.

Could the stats have been better for our team? Yes, they could have, but we let Cheyenne go ahead to a 48-0 lead at half and that triggered the mercy rule, which is automatic. This meant that during the second half the clock just ran and never stopped. I think the half started at around 9 p.m. and the game was over 20 minutes later. So the Trojans had the ball maybe twice for the whole second half. I am positive we would have done better in the second half offensively if we were given an opportunity.

Offensively, I would like to see some good passing against Spring Valley. Trojans QB TJ Milk has a good arm and has thrown quite a few passes this year and it’s time to unleash the Kracken against the Grizzlies.

I liked what Trojans coach Adam Gent did in the first series against Cheyenne. He went to the pass and his first three plays of the game were pass. I love it. That’s what the Air Raid offense was meant to do — pass. So pass away coach. Let-er-rip against Spring Valley. I want to see some air time and see those passing numbers go sky high. In my humble opinion, I think it’s time to show the league what Pahrump Valley can do in the air. I want to see Parker Hart running all over the field catching passes. Maybe even some screens to Tommy G or Devlin Dillon. It’s time that Milk break some passing records this week.

We had a few injuries during the Cheyenne game. Kevin Daffer went down with a dislocated shoulder. Get well Daffer and we hope to see you soon. The defense needs you healthy.

So it’s homecoming this week and I won’t say too much about Spring Valley. I will say that this is a team Pahrump can rip. All I can say now is come out and support the team and if you see the PVT in the parking lot tailgating, come say hi. We will have the chicken going around 5:30 p.m., of course bring your own.