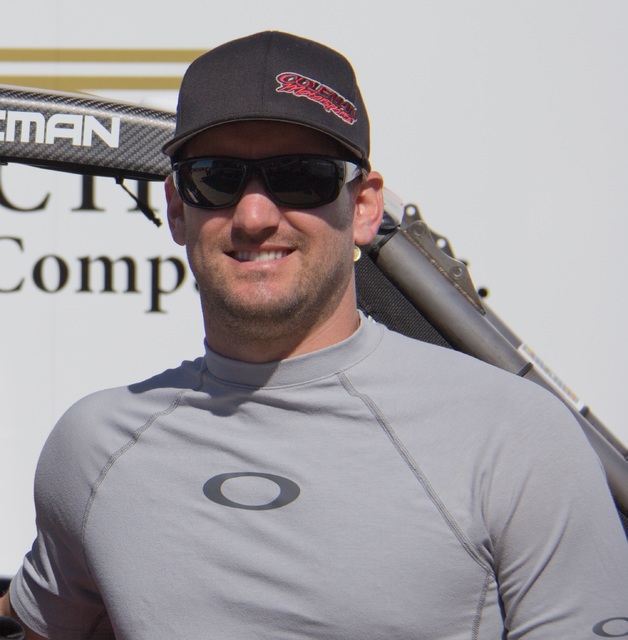 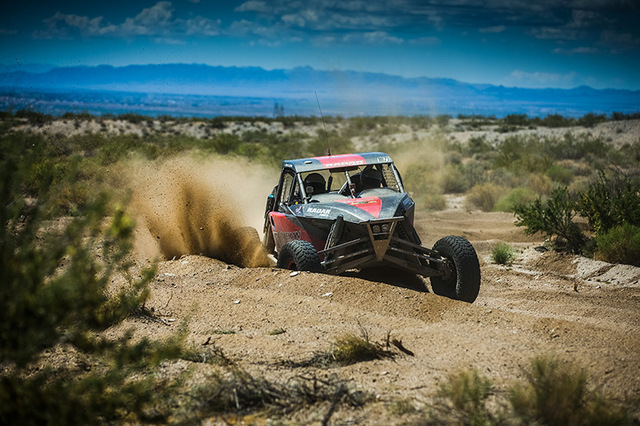 Jason Coleman speeds through the desert in his Jimco buggy. Coleman has ties to Pahrump as his aunt, Cary Jubinski, owns the Valley’s Edge Feed store. Coleman hopes a win in this week’s Pahrump 250 will propel him to the class championship. Special to the Pahrump Valley Times 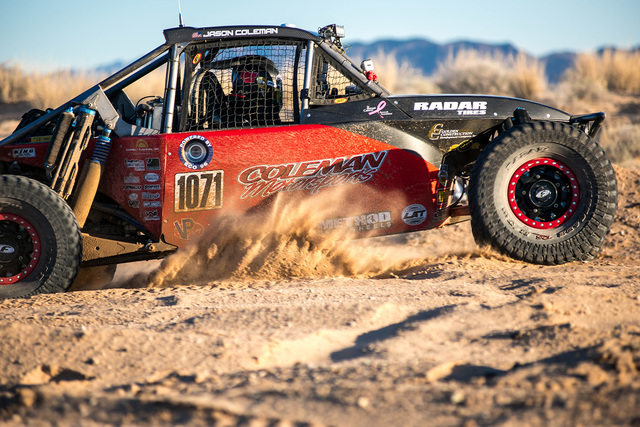 Best in the Desert racer Jason Coleman, a class 1000 driver, is not a household name but he is in contention for the class championship as he sets out to win the upcoming Pahrump Nugget 250 on Saturday.

And that’s what off-road racing is all about. Everyday weekend warriors can succeed at this type of racing. There are big names in the sport, like three-time winner of Best in the Desert Vegas to Reno, Jason Voss. But the majority of the people who race in these races are “garage” racers, guys that get into off-road racing and do the majority of the work in their own garages.

Coleman started off this way and his family has a racing tradition.

The off-road racer has ties to Pahrump, despite being raised in California.

“My grandparents lived here,” he said. “And now my aunt and uncle live here with my grandmother. My aunt, Cary Jubinski, owns Valley’s Edge Feed Store.”

Jubinski is one of Jason Coleman’s biggest fans and is excited to have the Pahrump 250 back in town.

“I am a proud auntie,” Jubinski said. “Off-road racing runs in the family. I used to pit for Ivan Stuart. I have followed my nephew all over, he has raced up here before when it was the Terrible’s 250. This year my son is going to help him crew. Jason works hard to support his family and his passion. He is so driven to support his passion. It is in his blood. My father raised us all to go for it, we don’t know any different.”

Coleman got into off-road racing as a kid. His whole family was into it and he was constantly surrounded by people who were involved in off-road racing.

“I always knew about off-road racing,” Coleman said. “When I was a kid my dad pit for Ivan Stuart. Racing was in my blood.”

“I remember my dad taking me down there and I sat there for 45 minutes before I went in,” he said. “My dad had to urge me to go out and talk to them. I remembered telling them that I just wanted to volunteer to sweep the floors.”

The off-road racer said his passion for racing led him into a career of construction.

“I had this passion to build my business and this business would fuel my racing, which we have slowly built through sponsors.” he said.

For the Colemans, racing is a family thing. He said his wife is into racing and that’s how he met her.

“My sister-in-law races, but my wife isn’t into the racing and doesn’t want to drive,” Coleman said. “She just has a lot of fun.”

In 2000, Coleman started with Terrible’s racing and then in 2004 he started as a navigator in a car. In 2008 he started driving in races.

His years of volunteering taught him that racing was a tough sport.

“Over the years I have learned to persevere from my father-in-law and working as a volunteer,” Coleman said. “And that you win some and lose some, and what counts is the overall performance. You can be down in a race and then five miles later you can be passing the guy that passed you earlier.”

Coleman lives with his family in Huntington Beach.

The California racer is a rising star in BITD. He has won in his class in the Baja 500 and has placed several times this year in the Best in the Desert series, which is a six-race series.

“We had a couple of podiums this year and we hope to finish the year strong,” Coleman said. He is now third in the standings with 399 points in the BITD Class 1000 behind Shane Earn with 453 points and Peter Hajas with 424 points.

For this racer, the return of the Pahrump 250 to this town is exciting because he did race this course before. He knows the area and more importantly knows the terrain.

“It is a sprint type of race and action-packed,” he said. “The chase race makes it exciting for the racer and the pit crew as they have to be on the move too. Pahrump is rocky and challenging and will test even our Radar tires. The severe dust makes for a pretty filthy course. The recent rains should help us a bit. You can hit a rock and it can end your race. The challenge is to keep moving.”

Coleman said coming into the town to finish gives the race a Baja feel to it and, “This race will have huge implications to the points.”

He races in a Jimco car/ buggy and feels he has a good chance of winning.

Russ Turner, a spokesperson for BITD, said it will be tough road for Coleman to win the championship, but it is doable.

“Technically, it’s possible. Shane (Earn) would also have to finish a couple of positions behind Coleman,” Turner said. “Also, the points are awarded depending on how many are entered. The more entries in the class the higher the points awarded. So far there are only 11 pre-entered in class 1000. Basically, everything would have to go right for Coleman.”

Turner is expecting close to 150 racers to be in town for the big event.