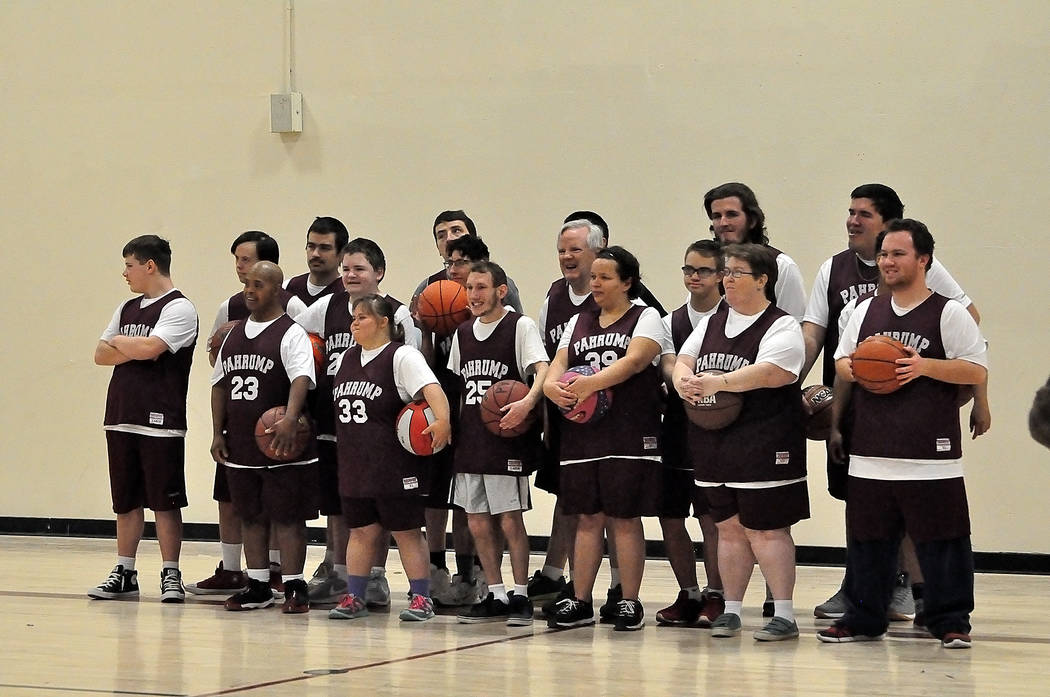 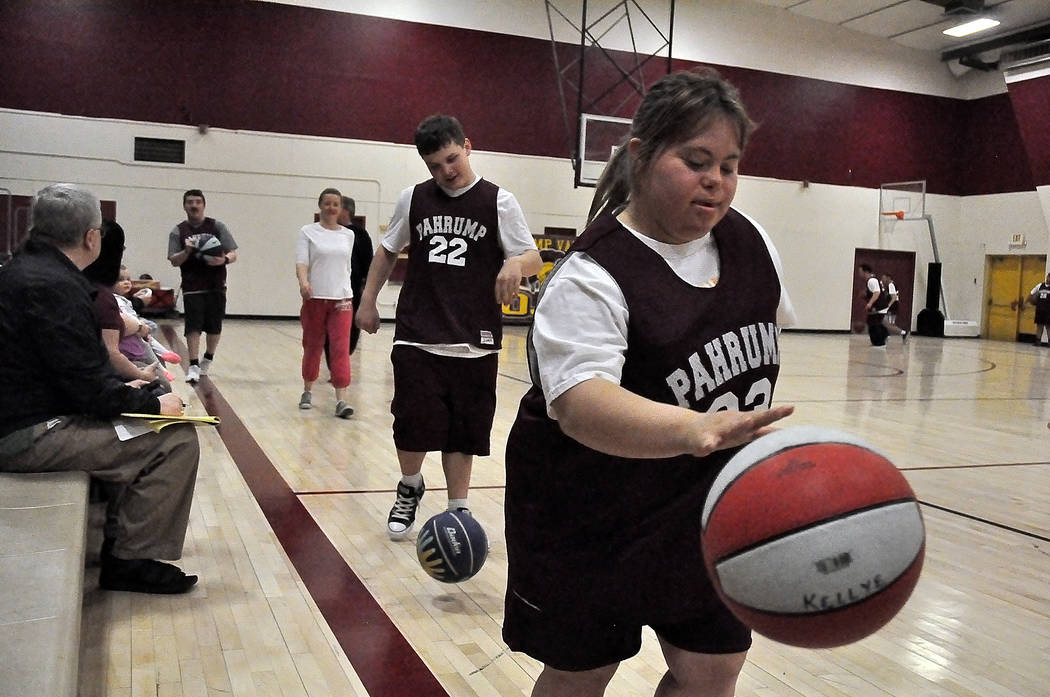 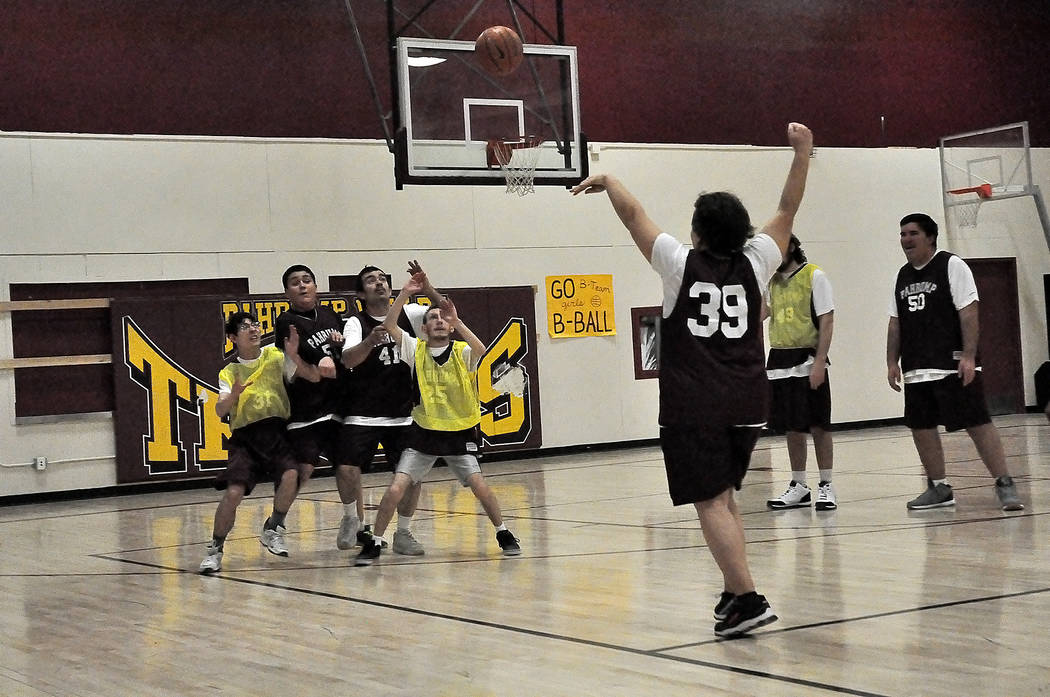 There were stretching exercises, jumping jacks, dribbling drills, passing drills and a series of full-court scrimmages, but it was no ordinary basketball practice.

“All of Las Vegas, Henderson, Mesquite and Pahrump will be represented at the tournament,” said Bruce Cox, head coach of the Pahrump Special Olympics basketball team. “There will be close to 300 athletes.”

If enthusiasm counts for anything, the Pahrump team should do very well. Teammates cheered good plays, whether it was Brandon McMillen or Garreth Forbes going coast to coast for a layup after a steal or Sterling Freeman putting a high arc on a one-handed shot from the free-throw line and finding nothing but net. And optimism runs rampant for the regional tournament March 10 at Legacy High School in North Las Vegas.

“I can tell everybody’s going to do very good,” Ashlin Johnson, 34, said after practice. “I’m so proud of each and every one of them. I hope each one of us comes in first place, because we’ve worked very hard.”

“We’re going to do an awesome job,” agreed Jasmine Butler, 29.

There are three Pahrump entries in the regional tournament, Cox explained.

Dane Pickthall, one of two 12 year olds playing basketball, is part of the skills team.

“I like dribbling, running and throwing the ball at the wall,” said Pickthall, who said he has been playing for “a couple of years.”

The other two teams play at different levels of competition, grouped according to the players’ ability to understand and run basketball plays, Cox said.

That structure allows many athletes to enjoy basketball regardless of age or ability. Players aged 12 to 64 will compete for Pahrump.

“We can have athletes as young as eight and as old as 98,” Cox said. “Anybody that has an intellectual disability is able to participate. They just need a physical, and then we get them into Special Olympics.”

Much like any other basketball program, injuries are part of the game. Ashton Kamien, 19, said he played for a couple of years and then stopped because he got hurt during a game.

“This time I will wear a mouthguard to protect my teeth at all times,” said Kamien, who listed soccer, football and bowling as his other favorite sports.

“Almost all of our athletes do bowling,” said Bobbi-lee Ward, Nye County area director for Special Olympics. “Track and field is very popular, too.”

The options are varied for aspiring Special Olympians, but Ward stressed the organization needs more volunteers.

“We have a need for coaches in basketball, soccer, softball, bowling, golf, bocce ball and track and field,” said Ward, who has been a volunteer for 13 years and is coming up on three years as area director.

“This is my 12th year coaching in Pahrump,” Cox said. “I answered an ad in the paper. The area director was looking for coaches for different programs, and I played basketball my entire life.”

Now Cox is helping people who sound like they want to play for their entire lives as well, and they appreciate his efforts.

“I love my coach, Bruce, because he makes us all work very hard, and he’s so special to everybody,” Johnson said.

“I love everything about the game,” said Butler, who said this was her first year participating.

It’s not all rainbows and unicorns, however.

“Sometimes we smoke in here because the air conditioners aren’t on, so we have to deal with it,” Pickthall said. “I hate that.”

But the rewards can be great, and not just in basketball.

But first, Klem, Flannagan and their teammates will play basketball in the regional tournament. Pickthall summed up how much playing the game means when he was asked if he has a favorite basketball team.

“This is my favorite team,” he said.

Ward said that anyone interested in volunteering to coach a Special Olympics sport should contact her at 702-970-7668.