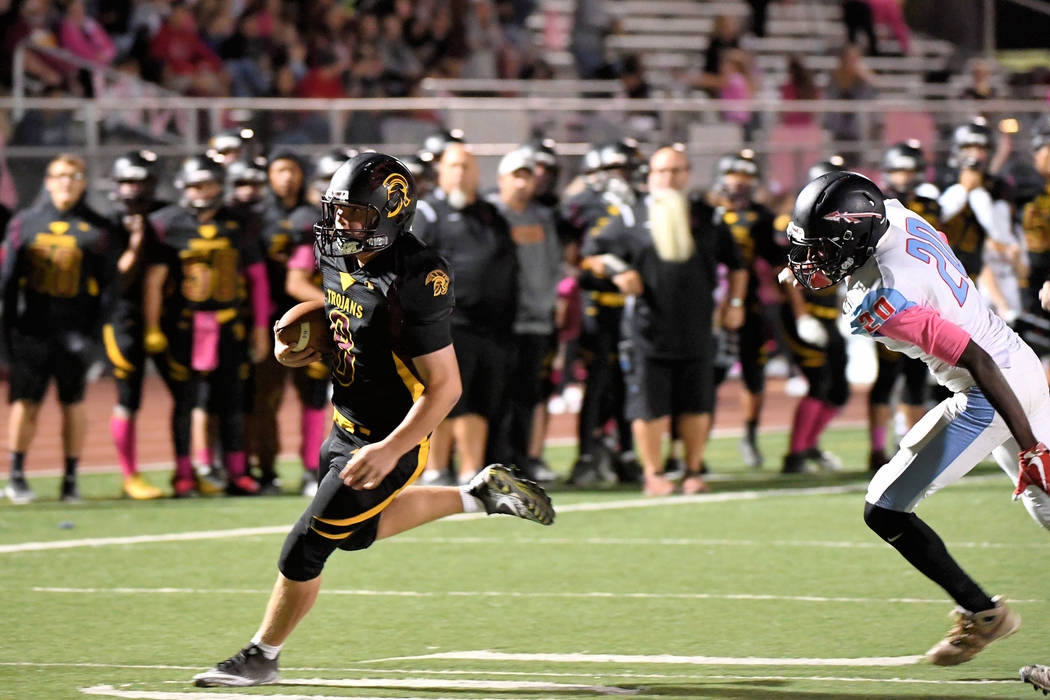 Peter Davis/ Special to the Pahrump Valley Times Tyler Floyd runs for the end zone during the Western game. The Trojans had a chance during the game to play seniors and underclassmen that normally didn’t get a chance to play. 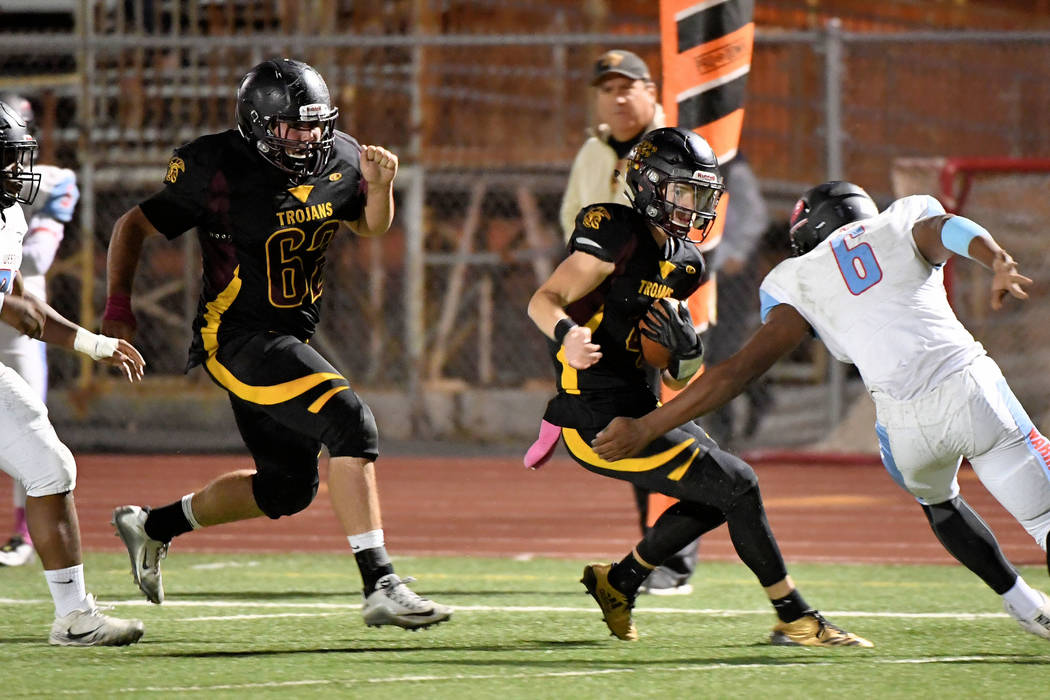 Peter Davis/ Special to the Pahrump Valley Times Senior quarterback Dylan Coffman runs for extra yardage on Friday night. Coffman had a 49-yard TD run in the first quarter to get the Trojans on the scoreboard. 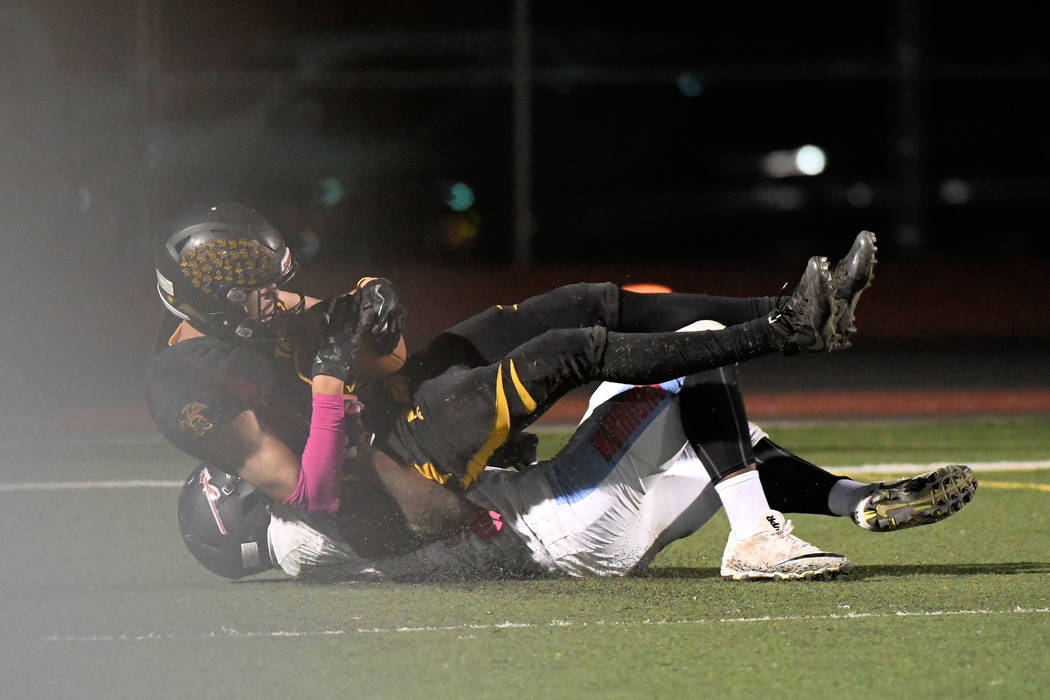 Peter Davis/ Special to the Pahrump Valley Times At left, Senior receiver Cory Bergan comes down with the ball in the end zone for a 33-yard TD reception against Western on Friday night. The Trojans won 40-6. 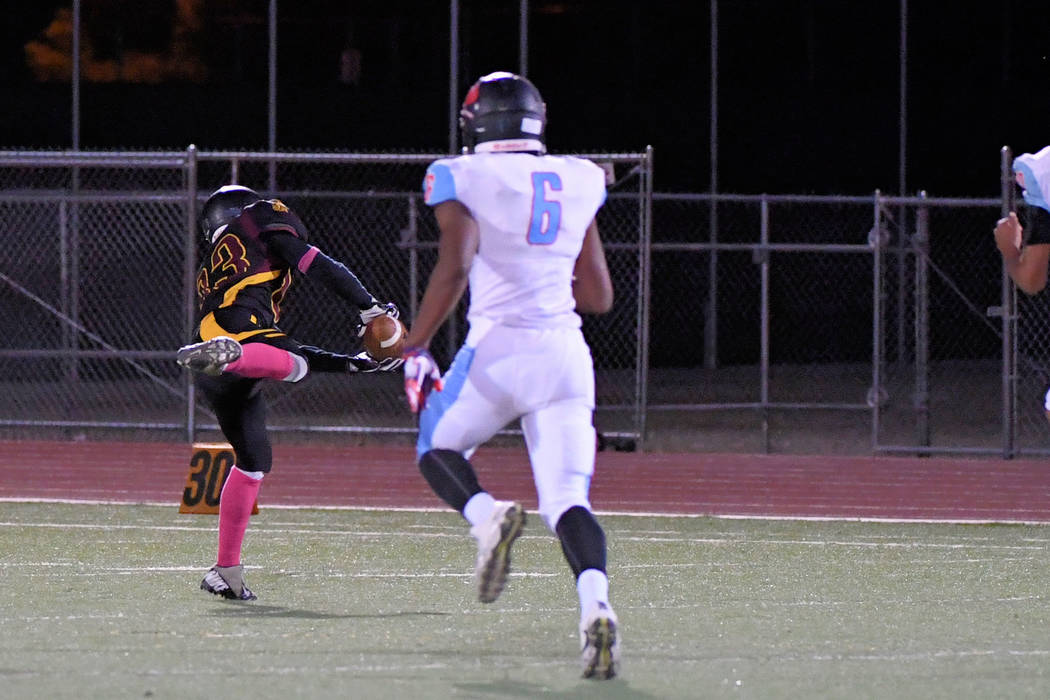 Peter Davis/Special to the Pahrump Valley Times Casey Flennory comes down with a 33-yard reception against Western. After that play, Pahrump took the ball into the end zone.

The Pahrump Valley Trojans beat Western with ease with over 200 yards rushing on the ground and 66 yards passing through the air, 40-6.

On Friday, Western knew the Trojans were going to run the ball and so they put up to nine guys in the box to defend against the run (the box is one offensive tackle to the other), hoping to plug the gaps. But it really didn’t matter how many defensive players they stuck in there, the Trojans offensive line just tossed them aside.

“Western is improving and we knew we would just run right at them,” he said. “We are excited about Mojave.”

“I feel we played great and got the offense going early,” he said. “It felt good to get some passing yards and a touchdown. The line gave me time to make the throws. I feel we can beat Mojave. Everyone needs to get their job done.”

The win puts the Trojans (4-4 overall, 2-2 Sunset League) in a tie with Sunrise Mountain, but since the Trojans lost to Sunrise Mountain (4-4, 2-2) in head-to-head play it puts them in fourth place. Desert Pines (5-2, 4-0) is undefeated in league play and in first. Mojave is in second place (6-2, 3-1). Pahrump will play Mojave on the road in their last league game this Thursday.

Pahrump’s offense got on board first. Within the first 10 minutes of the game they had scored two touchdowns.

The first one only took four plays. After the initial kickoff, the Trojans got the ball on their own 35. They advanced to midfield on two rushing plays but failed to get a first down. On fourth and one, Dylan Coffman took the ball into the end zone on a 49-yard run.

The Trojans defense then held Western to four downs and caused them to turn the ball over on downs at midfield.

Pahrump Valley then marched down the field again thanks to junior running back DeAngelo Brown’s 46-yard carry to the one-yard line on second down. This set up a senior running back David Roundy TD, which made it 14-0 after they converted a two-point conversion.

The Trojans defense then caused a three-and-out and the offense took over on their own 38-yard line. On second down Coffman completed a 33-yard pass to junior running back Casey Flennory, which gave the Trojans first down on the Western 33-yard line. Then on first and five from the 33-yard line, Coffman threw a 33-yard pass to Cory Bergan to make the score 20-0. The two-point conversion made it 22-0.

Before the end of the half, the Trojans scored another TD on a two-yard keeper by Coffman to make it 28-0. The two-point conversion made it 30-0 at the half.

Pahrump’s defense only allowed one touchdown.

The Trojans coach said he used this game to play a lot of seniors and junior varsity players who normally wouldn’t get playing time.