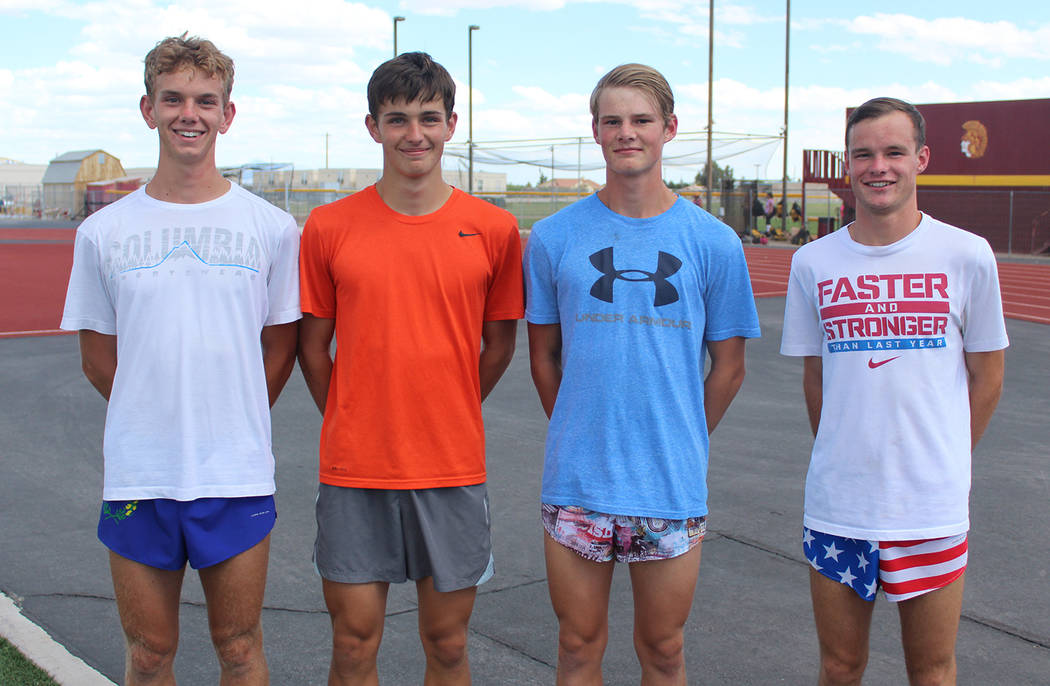 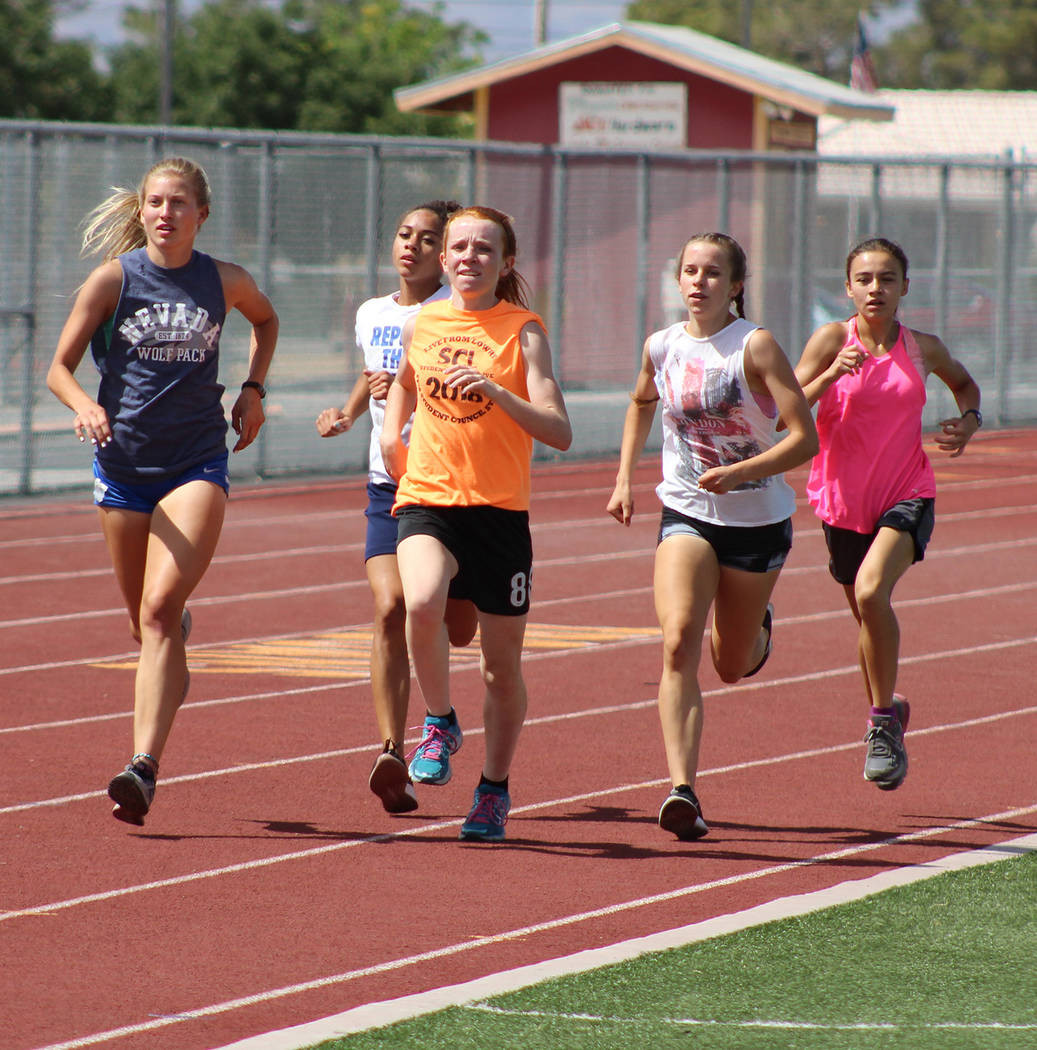 Tom Rysinski/Pahrump Valley Times Pahrump Valley High School girls track and field athletes get a workout in before the Class 3A state championships, which will be held Friday and Saturday at Carson High School in Carson City.

Seniors Bryce Odegard and Layron Sonerholm and sophomores Grant Odegard and Michael Sonerholm give Pahrump Valley’s boys track and field team considerable strength in the distances. Maybe even more than they realized.

The quartet was set to run the 4 x 800-meter relay together for the second time this season last weekend at the Class 3A Southern Regional Championships in Overton. And they had a goal.

“A couple of weeks ago, Grant and Mikey put it together, and they go, ‘I think we can run about an 8:19,’ which would have been a school record,” Bryce Odegard said. “That was our goal.”

Their project time of 8 minutes, 19 seconds turned out to be a bit modest. The two sets of brothers burned up the Moapa Valley High School track in 8:06.95, winning the event by more than 13 seconds and breaking the regional meet record.

“It had been a dream for them since middle school to compete and win as a group,” Pahrump Valley coach Fred Schmidt said. “Not only did they compete and win, they set a new regional record for the event. So that was a great moment for them and the team.”

Schmidt is not exaggerating about how long they have been working together.

“We run together almost every day in practice, and Bryce and I have been running on the same team since sixth grade,” Layron Sonerholm said.

While the school record and region title were clear goals, the region record didn’t pop into anyone’s mind in advance.

“The old one was 8:09.72, I believe. We knew that,” said Bryce Odegard, who ran the anchor leg. “We were looking everything up the night before, but we weren’t really striving to get the region record.

“When I got the baton, my dad was standing over at the 300 start line, and he told me about 100 meters into my race, ‘Bryce! We have a shot at the region record!’ And I kind of went, ‘Shoot, we gotta go.’ That was the first moment we thought about breaking this record.”

“I think we all were running pretty well, but we didn’t expect to run that fast,” Michael Sonerholm said. “We were thinking about maybe getting first, competing for that spot, but we had no idea that we could run that fast. I guess we all just had good days and decided not to mess it up.”

“It definitely seemed possible looking back on it now, but it didn’t seem possible before,” Grant Odegard said. “But I think we can do one better this week.”

The younger brothers also qualified for the state meet on their own. Michael Sonerholm finished fourth in the 3,200 (4:44.86), while Grant Odegard placed fifth in the pole vault in a personal-best 11 feet, 6 inches.

Jeremy Albertson broke his school record in the discus, winning the region title in 162-4, while Morgan White qualified by placing third in the shot put (45-7) and the discus (125-0, a personal best).

“Jeremy has broken the school record 10 times, so he’s broken a lot of his own records,” Schmidt said. “He’s held the school record since he was a sophomore. And Morgan has the ability to be a state champion in the shot put.”

The other two Pahrump Valley boys to qualify for the state meet were high jumpers Chance Farnsworth and Jacob Sawin. Farnsworth cleared 6-0, while Sawin had a season-best 5-8.

Overall, the Pahrump Valley boys finished third in the meet with 111 points, trailing Desert Pines (139) and Mojave (133). Desert Pines, in fact, presents what the Sonerholms and Odegards feel will be their toughest competition in Carson City.

The Pahrump Valley girls team totaled 68 points to finish fifth in the region. Moapa Valley (109), Sunrise Mountain (95), Mojave (77) and Virgin Valley (70) placed ahead of the Trojans.

“Makayla Gent is a little freshman animal. She just keeps chewing people up,” Schmidt said. “Sydney is probably not quite as vocal about her desire to go out and compete. They are just a pleasure to watch.”

Gundacker turned in a qualifying time of 1:03.65, and the personal record was good for fifth.

The other Pahrump Valley girls to qualify for the state meet were Kylie Stritenberger, who finished fifth in the shot put with a 31-9.5, and Elaina Dattillio, the only girl to place in last year’s state championships, who advanced with a second-place 4-8 in the high jump.