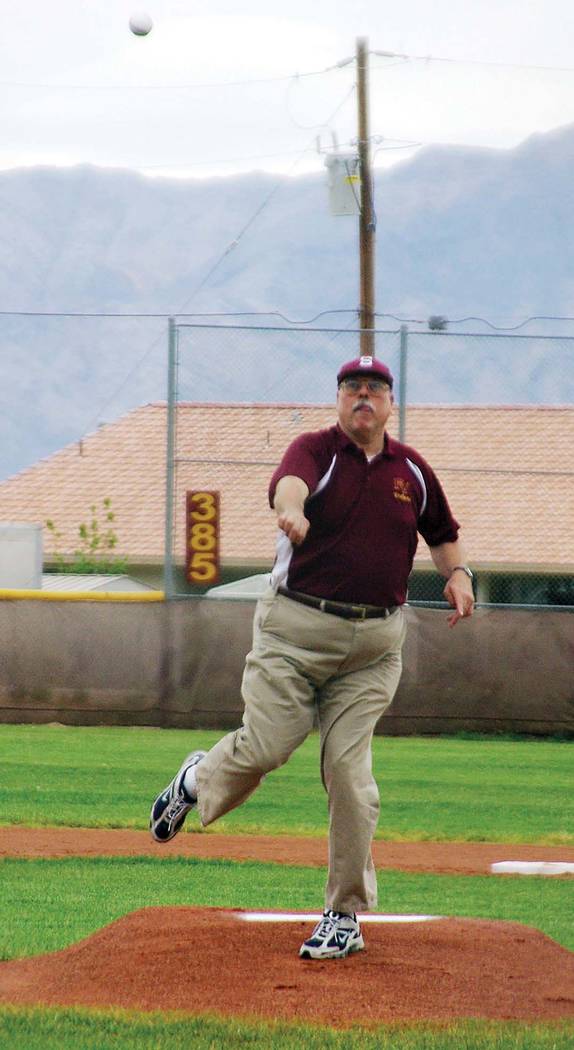 Horace Langford Jr./Pahrump Valley Times Former Pahrump Valley High School baseball coach Rod Poteete throws out the first pitch before a Trojans game in 2009, the year he retired from teaching at the school after 35 years. 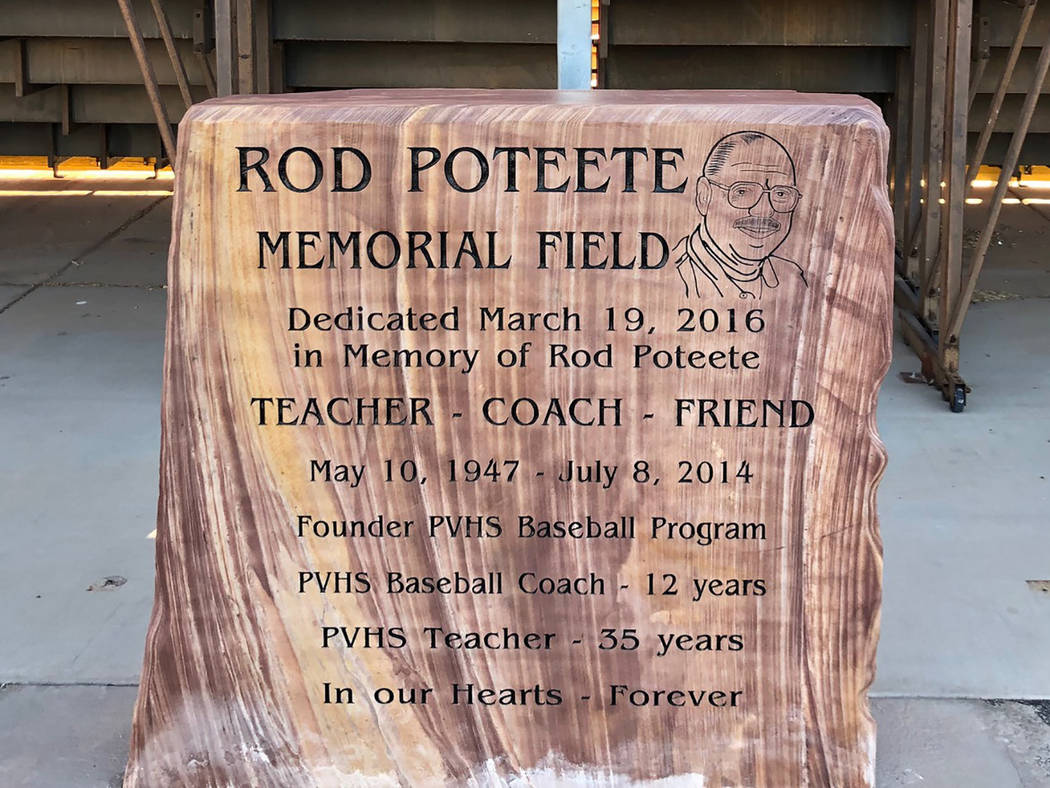 Tom Rysinski/Pahrump Valley Times The stone marking Rod Poteete Memorial Field at Pahrump Valley High School has been in place since 2016, when the baseball field was dedicated to the school's first coach. 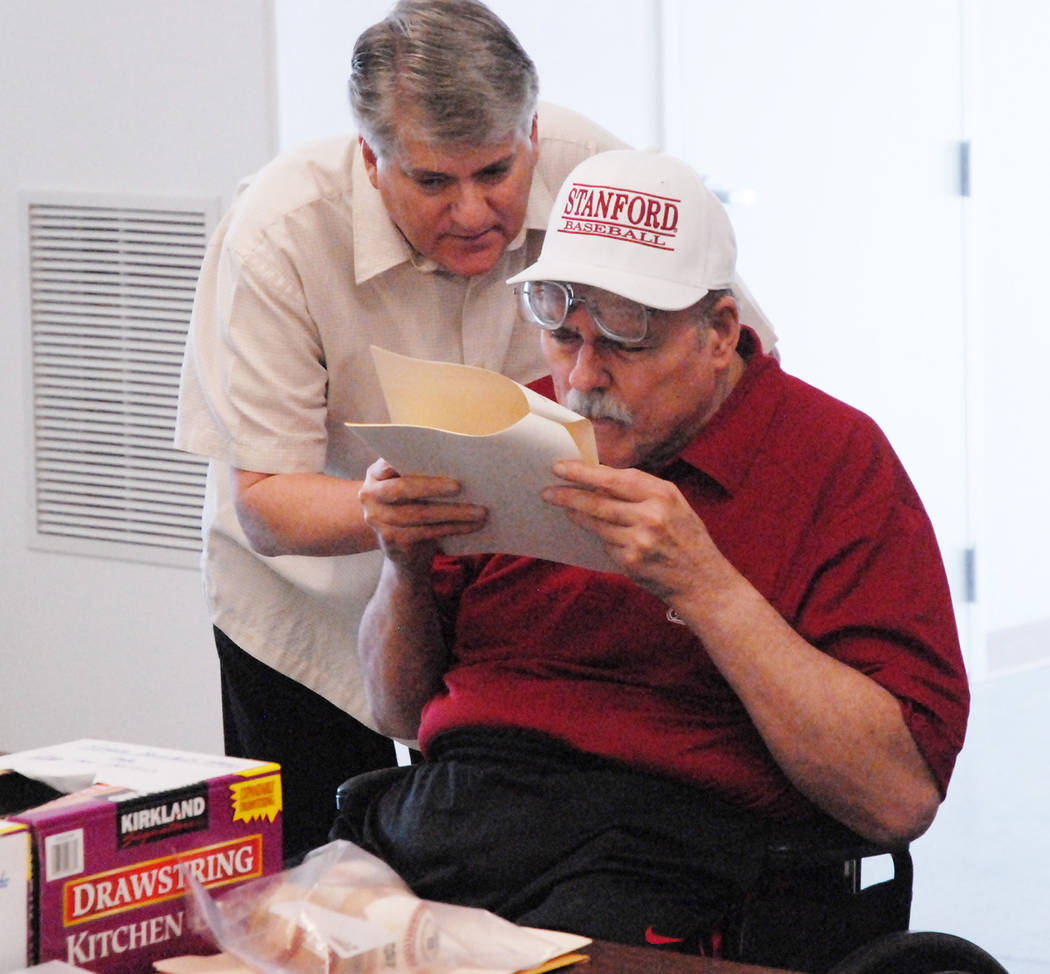 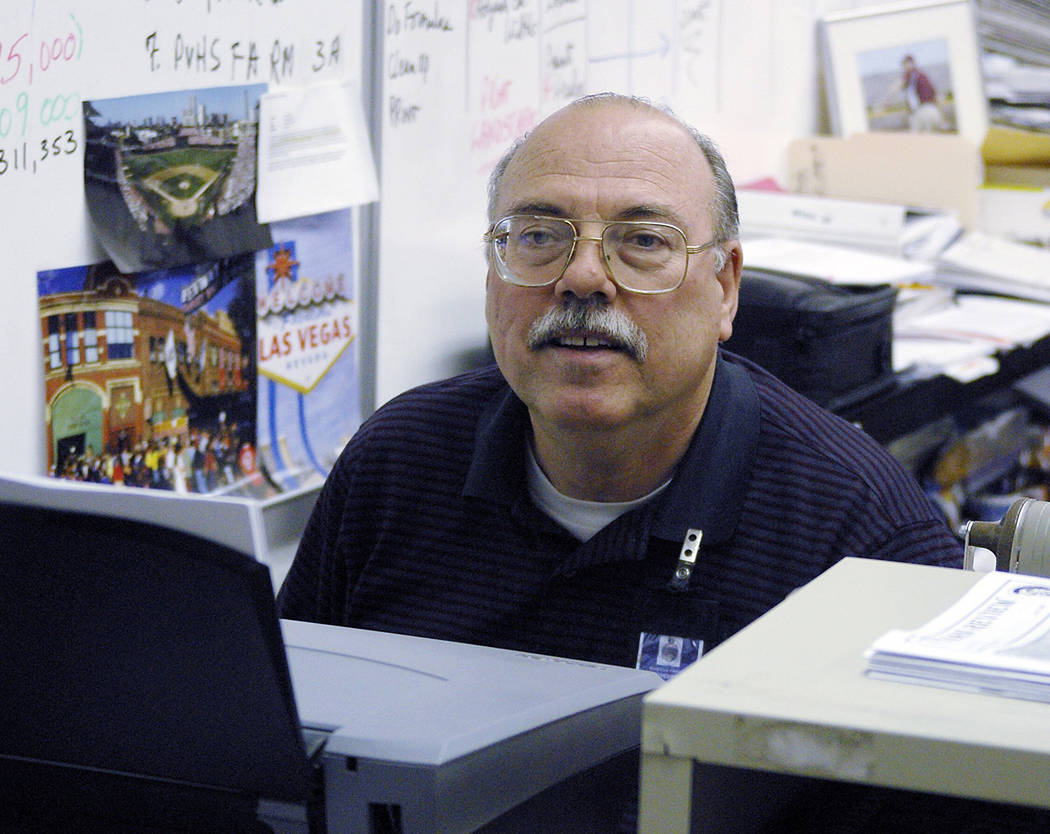 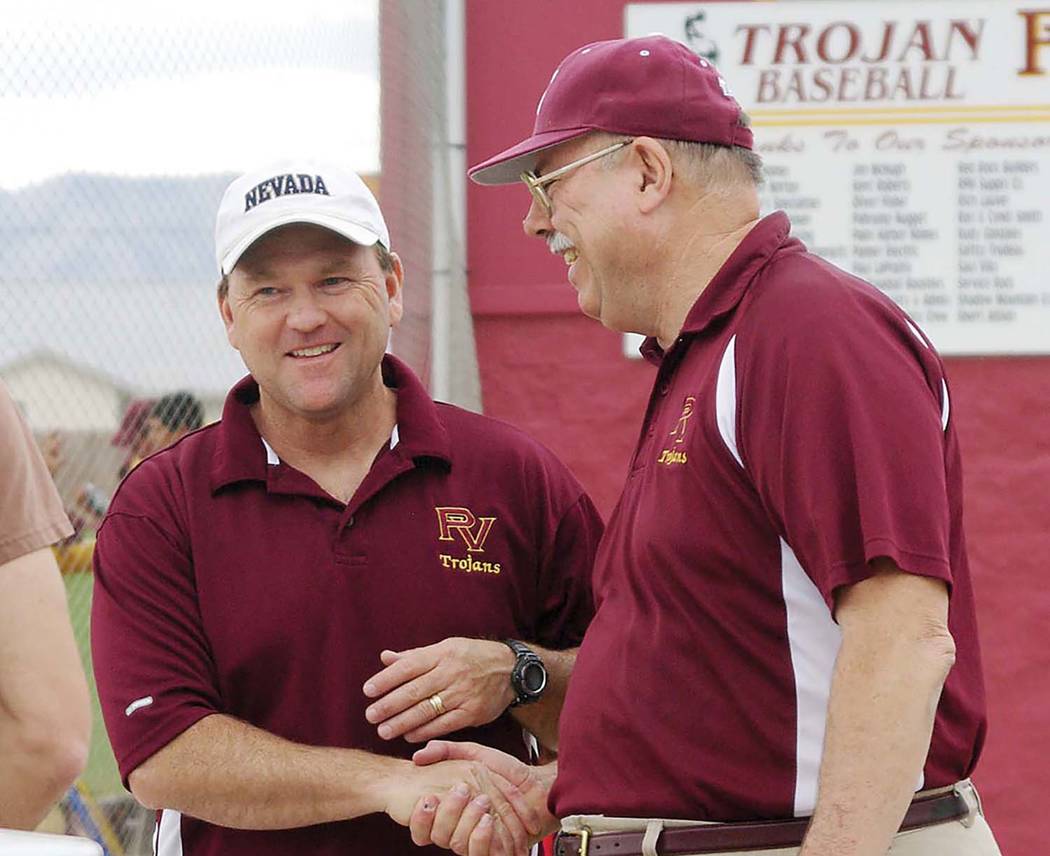 “I used to give him a bad time at school because I told him if he got a paper cut making copies everybody in the school would know about it,” Goins said. “’I just can’t believe that you were any kind of an athlete.’”

Oh, but he was. The man who would have his name placed on Pahrump Valley’s baseball field decades later had a very nice playing career for himself.

After an outstanding high school career in the Los Angeles area, Poteete played college baseball at Stanford, where his catcher was future Major League Baseball all-star Bob Boone. The 1967 Indians went 36-6-1, won the Pac-8 championship and finished third in the College World Series, their first appearance in Omaha since 1953.

Poteete tossed two complete games in Omaha, then followed that up by leading the team in strikeouts the next two seasons.

“In a College World Series game in Omaha, Stanford got beat 1-0 in 13 innings, and Rod pitched all 13 innings,” Goins said.

Overall, the 6-foot-7 right-hander went 20-5 for the Indians, posting a career ERA of 1.50, still third on the school’s all-time list. Those numbers got him drafted by the Los Angeles Dodgers. He played two years of minor-league ball, pitching to a 5.06 ERA in 96 innings, compiling a 6-3 record in rookie ball and Single-A.

After he was released, he moved to Las Vegas to pursue a master’s in secondary education at UNLV and become an assistant to baseball coach Bob Doering, who was his high school coach. In 1973, he was a graduate assistant trainer for all Rebel sports, working with football coach Ron Meyer and men’s basketball coach Jerry Tarkanian.

A year later, he started teaching and coaching at Pahrump Valley, where in 1975 he became the school’s first baseball coach. There was no budget, but enough money was found to buy each player a $9 uniform, and games were played at Petrack Park.

The Trojans won a league title in his fourth season, and under Poteete they reached the state finals in 1979, 1981 and 1983 and made the state semifinals in two other seasons. He was named Southern Nevada Small Schools Baseball Coach of the Year six times.

Goins became an assistant baseball coach when he arrived at Pahrump Valley in 1985.

“I was his assistant those first two years,” Goins recalled. “He was just passionate. They played all their games down at Petrack Park, so he basically built the field, which at that time sat where the gymnasium is now. He planted trees, did all kinds of work. He instilled a passion in the kids that played for him at that time. Those kids to this day still value the time that he was there.”

Poteete’s passion extended to other sports, according to Dale Norton, Nye County’s superintendent of schools.

Poteete resigned as Pahrump’s baseball coach after the 1986 season, primarily so he could spend more time with his sons, Kemer and Ryne, who were playing youth baseball in Las Vegas, where the Poteetes made their home.

With his wife, Jean, teaching at Bishop Gorman High School, he commuted 65 miles to Pahrump every day. At the time of his retirement, Poteete estimated he taught 37,000 classes and 7,000 students, drove 750,000 miles between Las Vegas and Pahrump, spent 15,000 hours on the road and burned 50,000 gallons of gasoline.

“The entire 35 years he taught out here he lived in Las Vegas,” Goins said. “He spent two hours a day driving pretty much. If we had a Friday home game and a Saturday home game, he would spend the night with us. Back then it was a two-lane road with no shoulder. At one time it was known as the ‘widow maker,’ Highway 160 from Pahrump to Las Vegas.”

Perhaps it was inevitable that all that commuting would lead to stories.

“When they were widening the road on the mountain, there was about a 45-minute delay depending on when you got there,” Goins said. “There was a pilot car, and Rod was putting in long days. He was the first car in line at the flagman stopping traffic, so he knew it was going to be about 45 minutes, and he happened to be by himself.

“He put the car in park and promptly fell asleep. He said he woke up just in time to see the flagman turn the sign back around to stop. Everybody behind him had passed him, and he slept through it. So he slept through two 45-minute delays.”

Norton said Poteete could easily have done something that didn’t require the daily drive to Pahrump, but the commute was something he truly wanted to do.

“Rod loved PVHS,” Norton said. “He had several opportunities to work in Las Vegas, where he lived, but he kept making the journey to his school family in Pahrump.”

Like Norton, Poteete had an extended sports family because of his work as an official.

Poteete was inducted into Pahrump Valley’s Athletics Hall of Fame in 2007, two years before he retired from teaching, and the baseball field at the school was dedicated to him in 2016, two years after his death to cancer on July 8, 2014.

At the ceremony dedicating the baseball field, Mike Floyd, who played for Poteete, summed up what his old coach meant to Pahrump Valley baseball.

“We didn’t have a baseball field in those days, so the first few days of practice were spent preparing the field at Petrack Park,” Floyd said, as reported by the Pahrump Valley Times. “Any boys that wanted to try out for the team had to put in the work on the field to make the first cuts. In my junior year, someone graded off an old hay field behind the high school, threw down some Bermuda grass seed, and coach Poteete had a new home baseball field.

“Coach Poteete even dragged out his old garage door and stood it up on the left field line as our scoreboard. He painted it up real nice and made numbers for it, and it looked pretty good. Coach Poteete was able to start a program from nothing, and in five years’ time had a team in the championship game.”