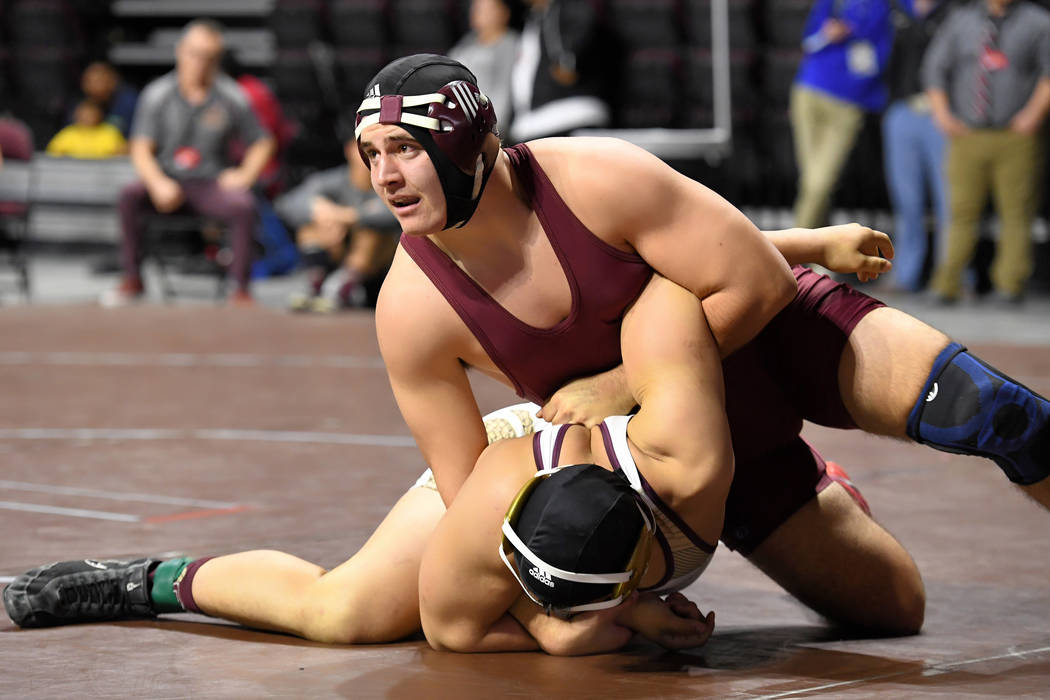 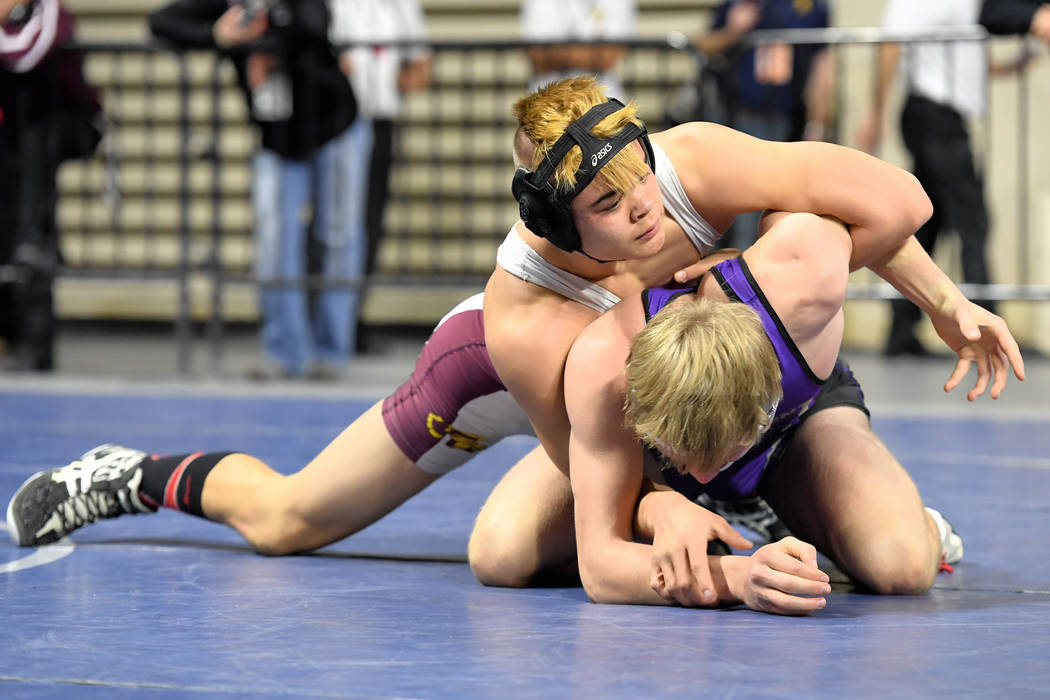 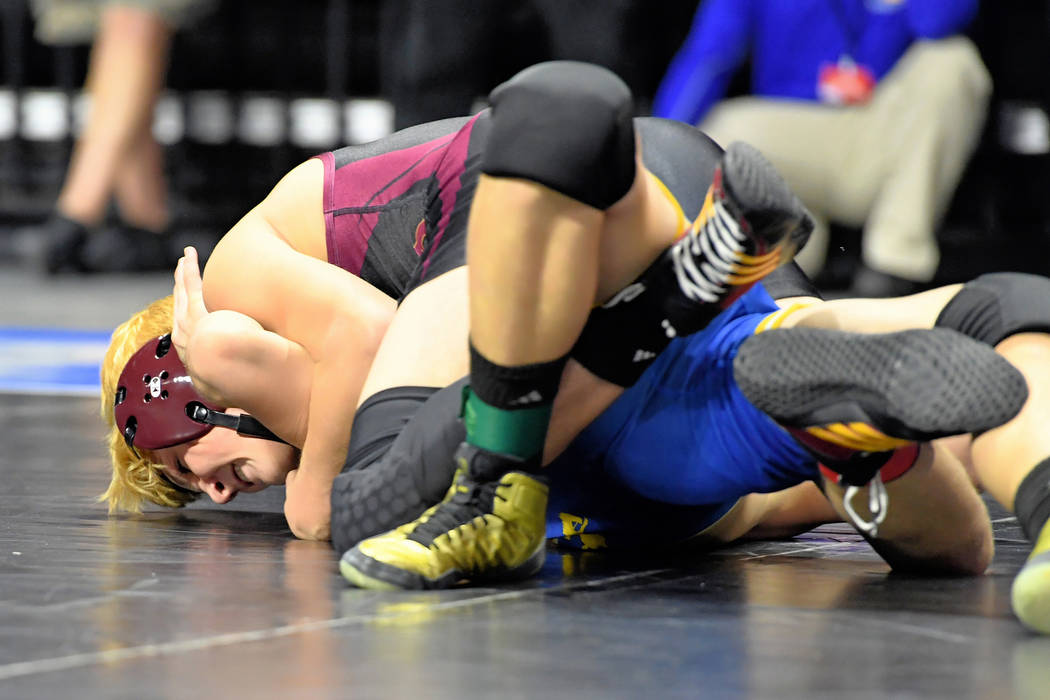 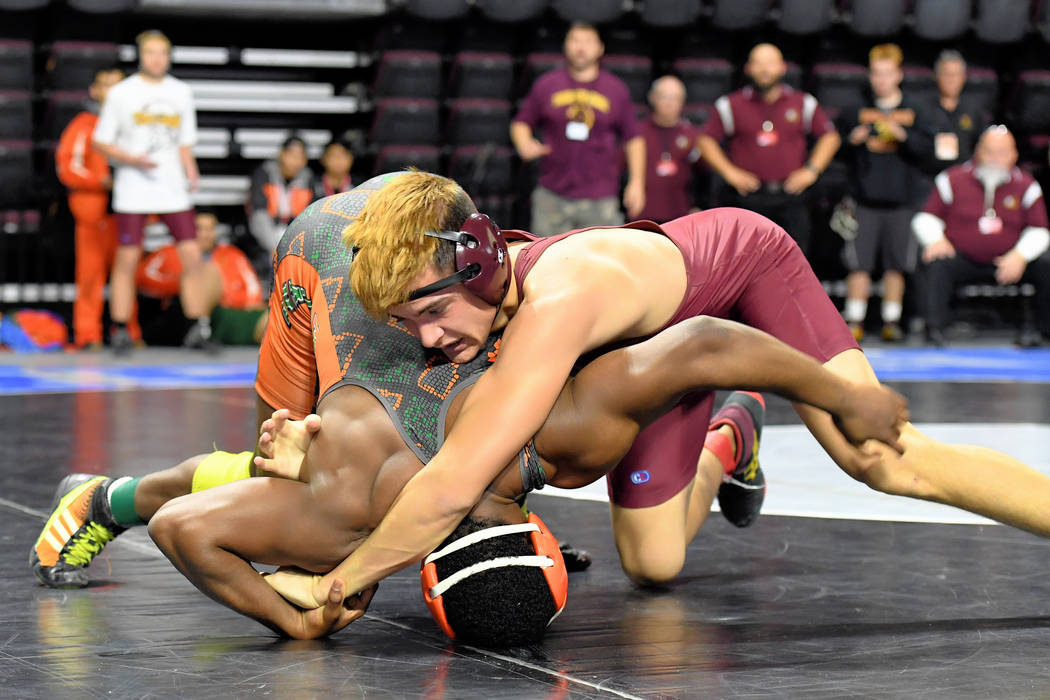 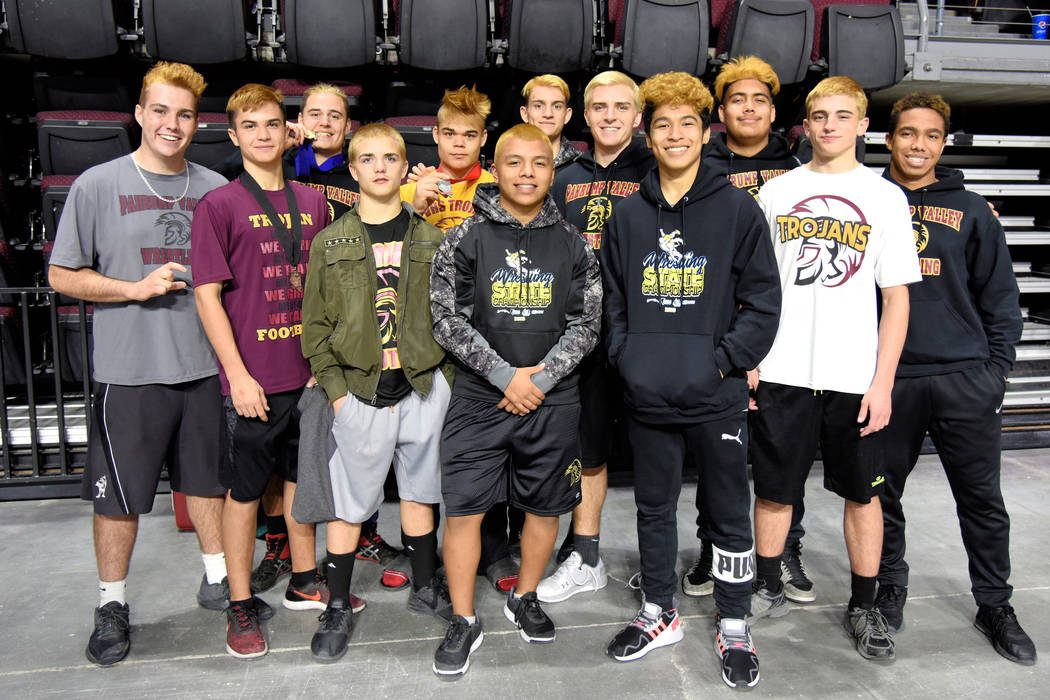 After wrestling as a freshman and sophomore, Pahrump Valley senior Morgan White took a year off.

“I didn’t wrestle junior year, which I regret,” White said. “I don’t really have an excuse. I just kind of flaked, didn’t want to do it.”

Perhaps he was saving his energy for his senior year.

White closed his high school career in style, defeating Julius Rice-Misa of Sparks by fall in 3 minutes, 6 seconds to claim the state Class 3A championship at 220 pounds Friday at the Orleans Arena in Las Vegas.

“It’s the greatest feeling in the world,” White said. “All the hard work and dedication finally paid off.”

It didn’t look good for White early in the bout, as Rice-Misa took him down twice and had him in some trouble while building a 6-0 lead.

“He’s just a strong kid. He moved around well,” White said. “So it was kind of hard to get him down and get him in a position I like.”

A reversal with a half-minute to go in the first period gave White some momentum, and he followed it up with a takedown less than 30 seconds into the second period. A half-minute later, it was all over.

“He barred him up, took him to his back, and it was great,” Pahrump Valley coach Craig Rieger said. “It’s what we do.

“I thought the wrestler from Sparks came out aggressive, and he had Morgan on his back. And Morgan just kept battling and fighting. I think in the second period Morgan just put on pressure, and the kid ran out of gas.”

In a way, the bout was a microcosm of White’s season, with struggles early leading to success.

“I never thought I’d be here,” White said. “At the beginning of the year, I was losing, losing, losing. So I just worked hard, as hard as I could. This is a dream come true.”

White said facing an opponent for the first time is only temporarily a hardship.

“It’s harder for the first minute, then it’s easier, because in the first minute you have to start feeling him out, making sure you know what he’s going to do,” White said. “After that, you can just run something you know they’re vulnerable to.”

White won all three of his bouts at the state championships by fall, defeating Chandler Hill of Spring Creek in 1:14 and Setriano Pirrodi of Fernley in 5:38. The Pirrodi match was a struggle most of the way, with only a Pirrodi escape on the scoreboard after two periods. White trailed 4-2 as the bout reached its final half-minute, but a late takedown led to a quick pin to send him to the finals.

“I just got a lucky break, flipped him up and just took advantage of it,” White said. “Sometimes it presents itself. Usually you’re looking for it, but in this case it just presented itself.”

White was not the only Trojan to reach the championship round. Freshman Braylan Durazo continued his superlative season with a technical fall over Timothy Moeai of Virgin Valley in the quarterfinals and a pin of Spring Creek’s Clay Campbell in the semifinals.

Durazo had a battle on his hands early against Campbell, barely fighting off one takedown attempt and getting taken down with 40 seconds to go in the first period. An escape cut the lead to 2-1 heading into the second, and barely a minute later Durazo had punched his ticket to the finals.

“It was just an arm bar and he was on his face, and he gave it up to me pretty much,” Durazo said. “So I just had to keep on running it. I knew he was going to give in to me eventually.”

Durazo was surprised Campbell chose bottom to start the second period but used it to his advantage.

“I wasn’t expecting to get that arm bar at first,” Durazo said “You’ve just got to keep on looking for something to get, to see what he gives you. You can’t force everything. He’ll eventually give you something.”

“He just broke down his opponent,” Rieger said. “He was persistent, took him to his back and got the pin. He’s just been aggressive. He moves well, wrestles well and is very mature.”

But that was the end of the road for Durazo, who ran into a buzzsaw in the final in the person of Sean McCormick of Churchill County. McCormick was aggressive from the start and got the pin in 1:20.

“McCormick from Churchill County is a three-time state champ,” Rieger said. “But Bray’s had a great year all year. Him and Dylan Wright have been among our leaders on the competition mat. Those two freshmen are two good leaders.”

Dylan Wright had an encounter similar to Durazo, running into Spring Creek senior Anthony Chavez, a two-time state champion, in the semifinals at 145. Chavez won by fall in 30 seconds, but Wright bounced back to claim third place.

Wright dominated Josh Abbott of Virgin Valley in the consolation semifinals, recording an 18-3 technical fall in 3:22. He was even better in the final, finishing off Andres Gonzalez of Lowry in just 20 seconds.

“I’ve been wrestling since I was four years old, and that’s a move I call the chin whip,” Wright said. “I’ve worked on it a lot over the years, and I’ve worked it to where I’m confident doing it.”

Wright did not lose perspective after his semifinal loss.

“I had a two-time state champ senior, and I’m just a freshman,” he said. “It was a really tough match, but I battled my way back to third place. Not a bad day at all.”

Also placing for the Trojans was junior Dylan Grossell at 138, who spent as much time on the mat as anybody on Friday. All four of his matches were decisions, with one going into a sudden victory period.

Grossell reached the consolation final with a hard-fought 7-5 decision over Akil West of Mojave. Trailing 4-3 after one and ahead 5-4 after two, Grossell figured he had West where he wanted him.

“I had wrestled him two other times this year, and I knew that I could outlast him with my stamina, so I just kept pushing the pace,” Grossell said. “I knew that he was gassed, and I tried to capitalize on it.”

The early deficit didn’t faze Grossell, who trailed West by eight in their first battle this season yet eventually won by fall.

“From that point on, I knew that I could just outlast him.”