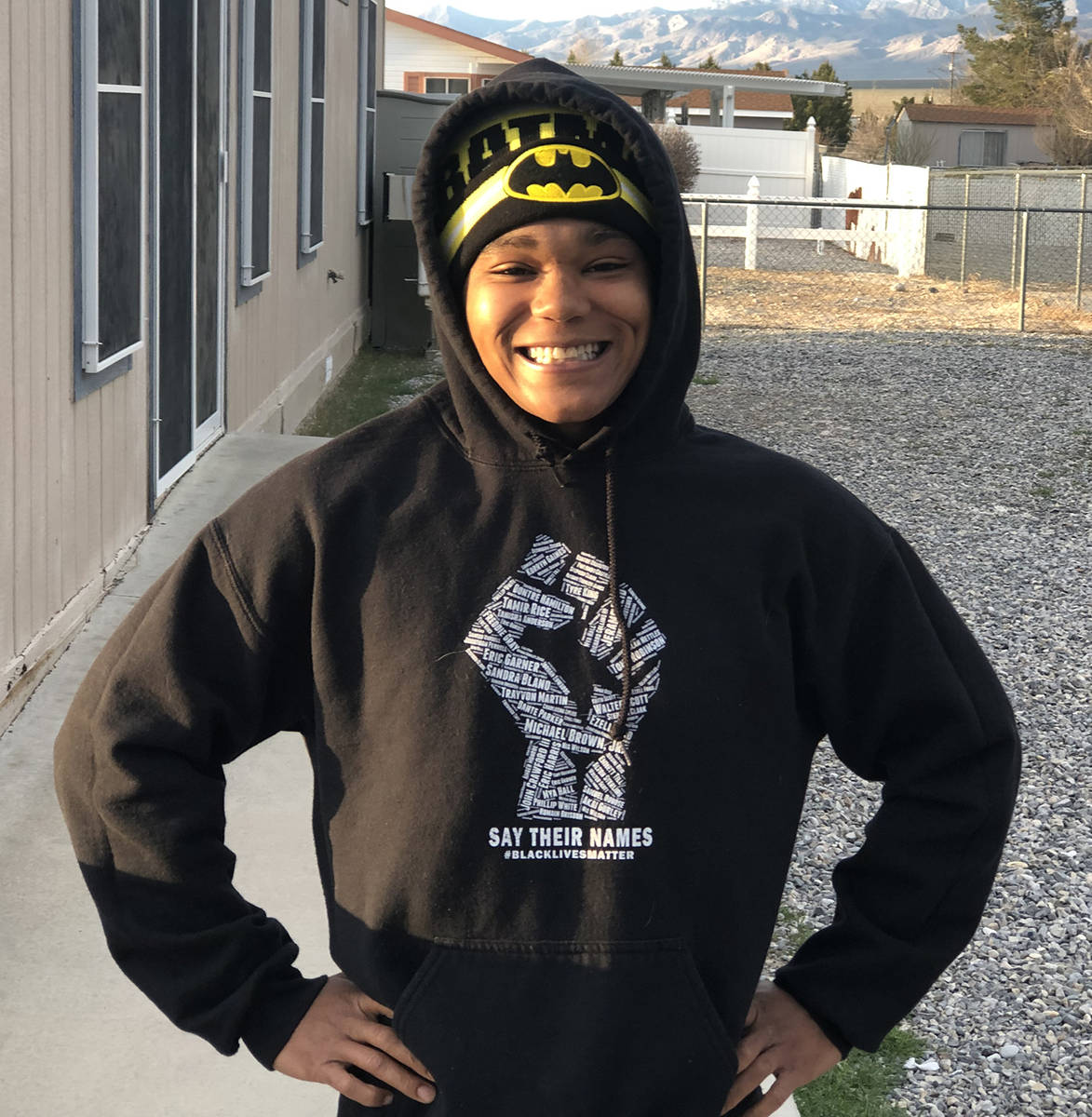 Tom Rysinski/Pahrump Valley Times Dominique Maloy talked about joining the San Diego Tridents of the Women's Football League Association in March at her home in Pahrump. 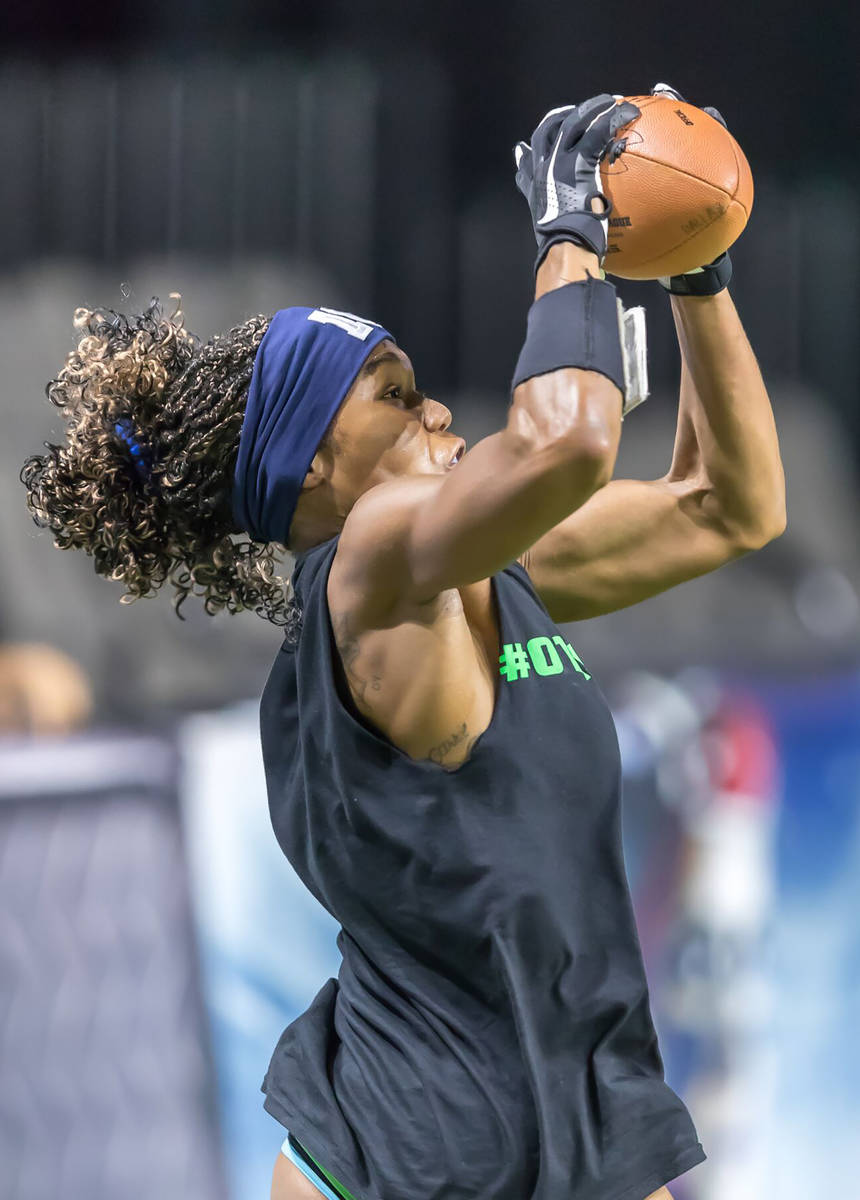 Special to the Pahrump Valley Times Dominique Maloy of Pahrump catches a pass during a Seattle Mist practice last year. 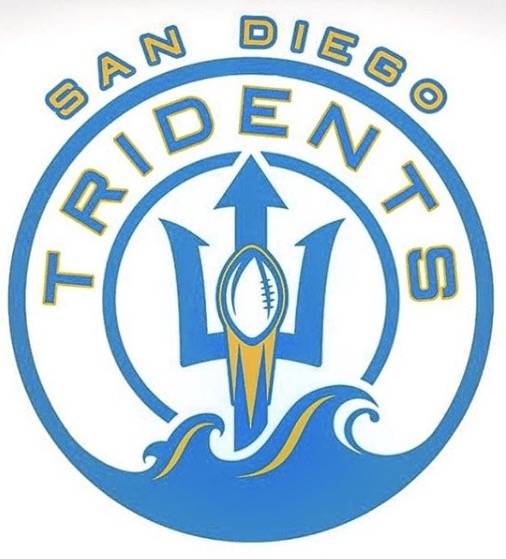 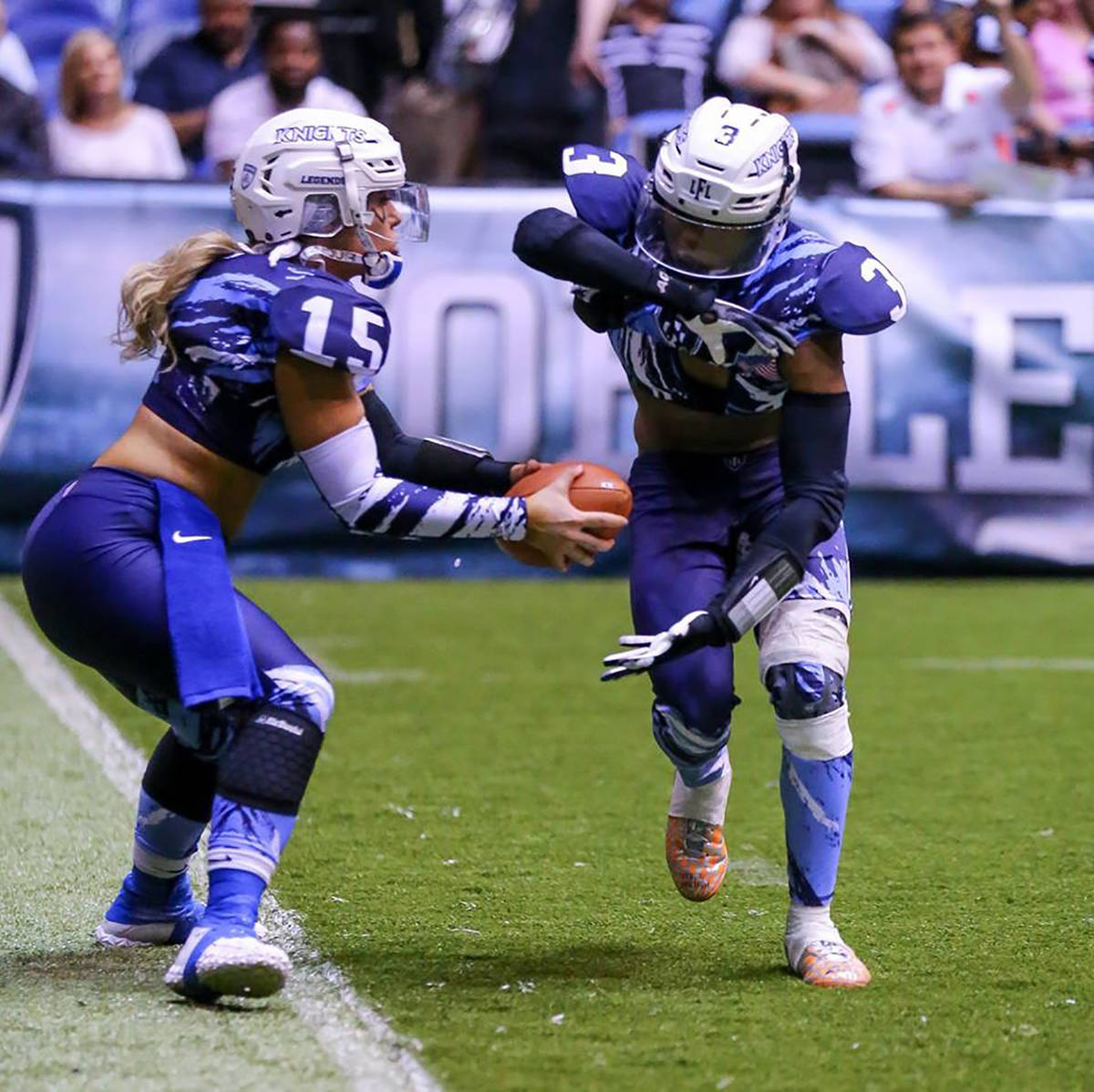 Beard Force Films/Special to the Pahrump Valley Times Dominique Maloy, right, gets a handoff from KK Matheny during a Nashville Knights Legends Football League game in 2018.

The Women’s Football League Association has a lot going for it, at least on paper. It has a CEO with a business background. It has at least one celebrity owner. It held a combine last fall in Las Vegas. It has a Facebook page and a schedule of exhibition games.

It also has Dominique Maloy.

“I first heard about the league back in September or October, a little after my last LFL season,” said Maloy, who played several seasons in the Legends Football League, spending the 2019 season with the league champion Seattle Mist. But any similarity between the LFL and the WFLA is purely coincidental.

“When I first got there in 2015, it seemed that from the commissioner and where things were headed, we were going to become professionals in that league,” Maloy recalled of her first football season with the Las Vegas Sin. “For me personally, it didn’t seem that was there it was going, and by last year it was kind of like life was showing me it was time to go somewhere else.

“It was no longer serving me in my higher purpose.”

The LFL was in the entertainment business; players did not earn an actual salary. By contrast, the WFLA means business, big business. The new league intends to pay players as professional athletes, is angling for television contracts and expects its debut 2021 season to include 32 teams across the country.

“From the coaches speaking to me, each team is individually owned in this new league and they individually sign the players, and the amount they are able to pay the players is dependent on the owners,” Maloy said.

The league is extremely ambitious, but it is still looking for more people to sign on. Go to the WFLA website and you will find ownership in 22 teams is available, starting at $500,000. On the page listing the available teams — the Baltimore Belles, Pittsburgh Vixens and New Jersey Dames (inexplicably in the Western Conference) are among those available — you will see an application to submit if you want to be a team owner.

Filling out a form online to buy a professional sports franchise the way you would to order that amazing nonstick pan might not seem like the method of a serious league, but the WFLA has been flying primarily under the radar during its formative period. The media splashes it has made have gone largely unnoticed.

The league announced in December that Santia Deck signed a multimillion-dollar contract, the first for a woman in football.

“I was at the theater with one of my friends, we were in the middle of watching the movie and my mom called me and told me the offer, and I just ran out the theater screaming,” Deck told Yahoo Sports. “My friend thought somebody died, and I was like, ‘No, if you knew what my mom just told me, you would understand.’ And my life has changed after that.”

Deck isn’t just expected to be one of the WFLA’s best players, but her contract and the ensuing publicity also made her the face of the upstart league, founded by California businesswoman Lupe Rose. So far, musician Ja Rule is among those buying in, owning the New York team.

Rose is the founder and CEO of SHE Beverage Company and has an ownership interest in five WFLA teams, including the Los Angeles Fames, the Las Vegas Devils and the San Francisco Cranes.

“We’ve had hundreds of athletes here to showcase their skills, and some have flown in from around the world; as far away as Australia,” Rose said at one of the league’s combines. “That’s the drive we are looking for in our athletes.”

Maloy certainly has the drive. She has been training nonstop practically forever, and while her top performances, both at Pahrump Valley High School and Arizona State University, have come on the track, she has been an all-around athlete all along. That includes football, and she played at the Pop Warner level in Seattle and at Rosemary Clarke Middle School.

But it was a personal connection that will send her to San Diego.

“In my first season in the LFL, it was with the Las Vegas Sin,” Maloy said. “One of my teammates, her name is Michelle Minks Jordan, she is now a co-owner of the San Diego team. When they were thinking about bringing people onto the team, thankfully, amazingly, she thought of me. Knowing Michelle, I’m so excited talking about it.”

Part of the excitement is being on the ground floor of something, whatever that something might turn out to be.

“I haven’t been in this position before as far as starting something new,” Maloy said. “I don’t know what to expect, but the best thing I can bring to the table is being ready when they call me.”

Being ready for what life throws at her is important to Maloy, who admitted that has not always been the case.

“It’s important that I not get stagnant in my workouts because I think nothing’s going to happen,” she said. “That’s happened a few times in my life, where I’m thinking the opportunity is not going to happen or life is not looking like it’s going to unfold, and then literally the next day or the next week the opportunity happens and I’ve been taking my foot off the gas pedal to where I’m like, oh, shoot I’m not ready.”

But she is ready for this, and if the notion of going into not only a new league but a league that is attempting to do things that have not been done successfully should be scary, the potential upside keeps calling.

“It’s the feeling I get, not only when I talk to Michelle or the other teammate I brought on, Whitney Palmer, who I played with in Nashville,” Maloy said. “She’s on the same road I’m on right now. The feeling I get when I talk to people about it, when I see people talk about, it feels like the thing we’ve been dreaming about: a professional women’s football league that actually pays us to play.”

With the ashes of several football leagues still smoldering on the athletic dustbin of history — the World Football League, the United States Football League, the World League of American Football and two XFLs, a handful of lower-level pro leagues and, yes, some women’s leagues among them — there are no guarantees for the WFLA. Maloy is unfazed.

“I’m not so much nervous about aiming high,” she said of the WFLA’s ambitions. “Any opportunity I’m a part of is going to produce something. I want to be a professional athlete. I want to go to the ESPYs and win awards.”

The irrepressibly upbeat Maloy would no doubt make a memorable acceptance speech should that come to pass, but right now the potential future with the San Diego Tridents includes a vision that is both practical and hopeful.

“To be able to support myself, my mom, anything I’m a part of through football will be the biggest blessing,” she said. “I’m just trusting life and trying to be deliberate in everything I do moving forward. Hope for the best and believe in my dreams.”