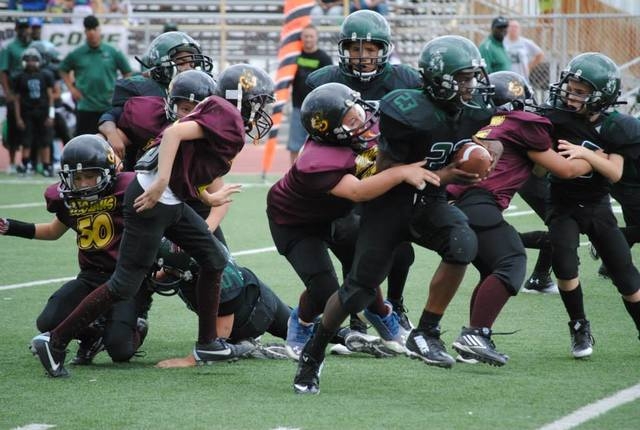 The Pop Warner organization is a national league and has had a decrease in sign-ups nationally. According to ESPN, From 2010-2012 their numbers were down by 9.5 percent nationally with a loss of about 23,000 players.

It seems the NFL concussion controversy had finally made a dent in youth sports and this was the first time the organization was able to see how badly Pop Warner was affected by it.

So it’s no surprise that two years later Pahrump finally saw a dip in participation numbers.

“Last year we didn’t field a Pee Wee Division team,” Pahrump Pop Warner Commissioner Johnny O’Neal said. “We are trying to rebuild the league. Even my own wife and I have had the head injury discussion.”

Without a Pee Wee team, which is ages 9,10 and 11, this left Pahrump with only two teams last year. O’Neal hopes to build Pahrump to four teams. He said each team can have as many as 30 kids.

The commissioner said he had to show his wife that Pop Warner was changing and that it was safe for their child.

“The organization is changing the culture,” the coach said. “Pop Warner has changed the way tackling is taught in the league with its new program “Heads up football”. The whole idea behind it is to take the head out of the equation in tackling, which will reduce the amount of head injuries.”

“In the heads up method the head doesn’t take the brunt of the hit. The shoulders do,” O’Neal said. “Pop Warner is a safe organization. Most head injuries occur at the high school ages and higher because they hit harder than our kids do.”

Pop Warner is having its first sign-up for the season, which starts in August on March 26 from 9 a.m.-2 p.m. at Ian Deutch Memorial Park behind the playground at the gazebo. They will have signs out. O’Neal said there will be three sign-ups.

“If you check around, you will notice other leagues cost so much more,” O’Neal said. “The reason why is Pahrump Pop Warner provides the pads and equipment. Parents don’t have to buy it all.”