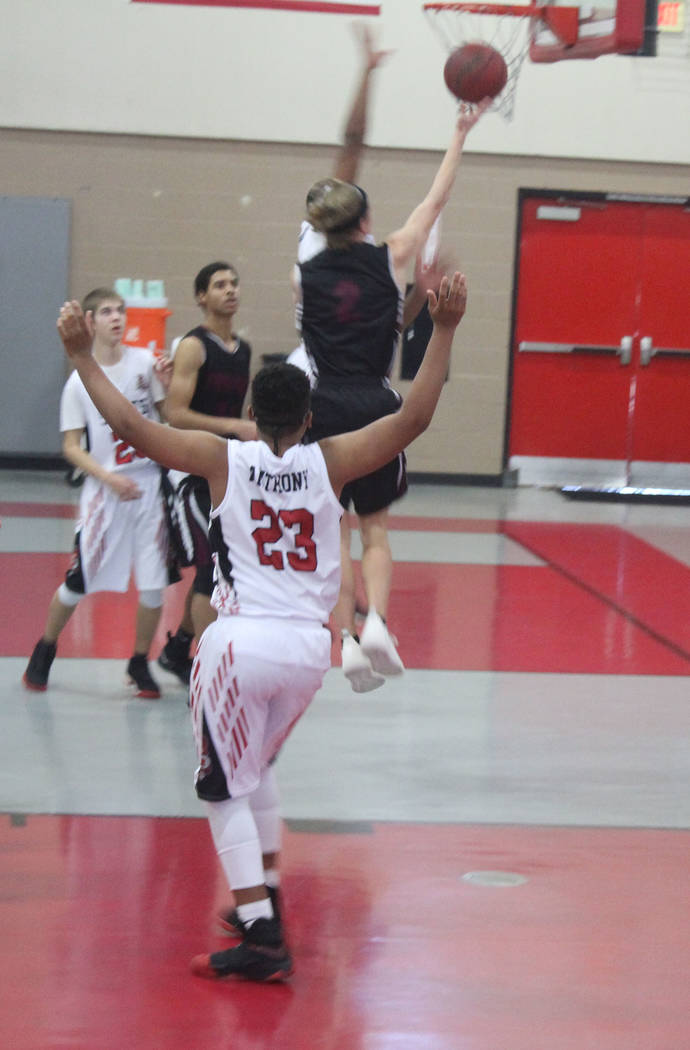 Tom Rysinski/Pahrump Valley Times Junior guard Grant Odegard drives to the basket against Mountain View Christian during the first half of the Las Vegas Invitational opener won by the Trojans, 55-28. 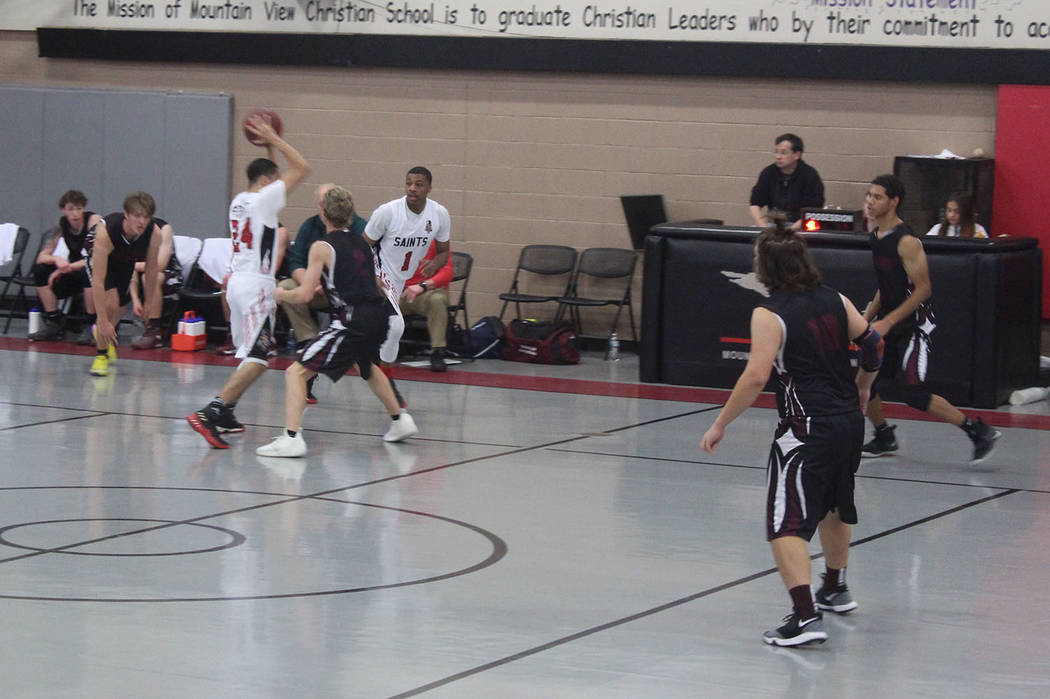 For 16 minutes Wednesday, the Pahrump Valley boys basketball team played as if it had yet to recover from over-celebrating New Year’s Eve, managing just 5 second-quarter points and going into halftime, trailing a 1-10 Mountain View Christian team, 19-14.

“It was winter break,” admitted junior guard Grant Odegard, who scored 9 points. “We were a little rusty.”

But halftime was just the elixir the Trojans needed, as they came out and played some of the best basketball of their season in the opening game of the Las Vegas Invitational.

Chance Farnsworth scored a game-high 15 points after having only 3 points at halftime as the Trojans outscored the Saints 41-9 after intermission to post a 55-28 victory over the host school.

As magical as the transformation appeared, apparently there was no magic involved.

“I think we just listened to Coach (Dan Clift),” said senior Brayden Severt, who finished with 12 points. “We just played more aggressive. We were more on the ball, just focused more instead of letting the game get in our head.

“That’s what we need every game. The energy was really high in this game. It went up a lot in the second half.”

The difference was stark. Clift used an appropriate word to, in the words of freshman coach David Yost, “light a fire under them.”

“We talked about at halftime how this is embarrassing for us as a team,” Clift said. “We’re better than this, and those kids get that. But in my three years here I’ve learned we can play down to anybody and up to anybody. I don’t worry about the up. But we’ll get a team that we should beat like we did today, and we’ll let them play with us for a half.

“I’m not a yeller or a screamer, I’m not going to get in their face. But I did motivate them by saying that’s embarrassing.”

When sophomore Javier Juarez hit a 3-pointer from the corner seven seconds into the second half to push the Saints’ lead to 22-14, it looked as if nothing had changed. But everything had; it took the Saints more than five minutes to score again, and in that time the Trojans poured in 17 points, including 6 by Farnsworth and 5 by Ethan Whittle, who played some of his best basketball of the season, finishing with 8 points to match his season high.

“E needs to play and score for us. He knows that,” Clift said. “He needs to step up and do something for us every game. I think a game like this afternoon, he gets an opportunity to settle himself down, play against kids who aren’t faster and taller and jump, and he can have some success.”

Senior forward Eric Toomer delighted the Pahrump Valley fans who made the trip by rattling home a 3-pointer from the top of the key to close out the scoring in the third quarter, which ended with the Trojans ahead 36-27. Toomer finished with 5 points, his first of the season.

“That’s what we wanted to see,” Clift said. “We wanted everyone to get some time tonight, we wanted everybody to score. Eric scored for the first time this year. It was good to have a whole team effort.”

The whole team effort was best reflected in the effectiveness of the Trojans’ press. They constantly made steals, forced bad passes, created held-ball situations and generally made life miserable for the Saints, who went possession after possession without getting a shot off.

“I think we’re quick, and Coach has set up a good press for us,” Odegard said. “He uses our quickness and makes it easy for us to make the steals.”

“I think we have a lot of big guys that are long on the court and quick at the same time,” Severt said. “We have people that can jump decently high, so it’s easy to pick off passes across the court.”

The press has worked during stretches of games before, but never as consistently well as it did against the Saints, who grew increasingly frustrated as the second half wore on. The Trojans never took their foot off of the pedal, opening the fourth quarter with a 15-0 run and outscoring the Saints 19-1 during the period.

Even with an active press and strong pressure on the ball when the Saints managed to get it out of the backcourt, the Trojans did not foul too much. The Saints were not in the bonus in the second half until just 2:27 remained in the game, and the Trojans outscored them 16-7 from the line.

Clift said the Trojans (3-6) did exactly what they needed to do in the second half.