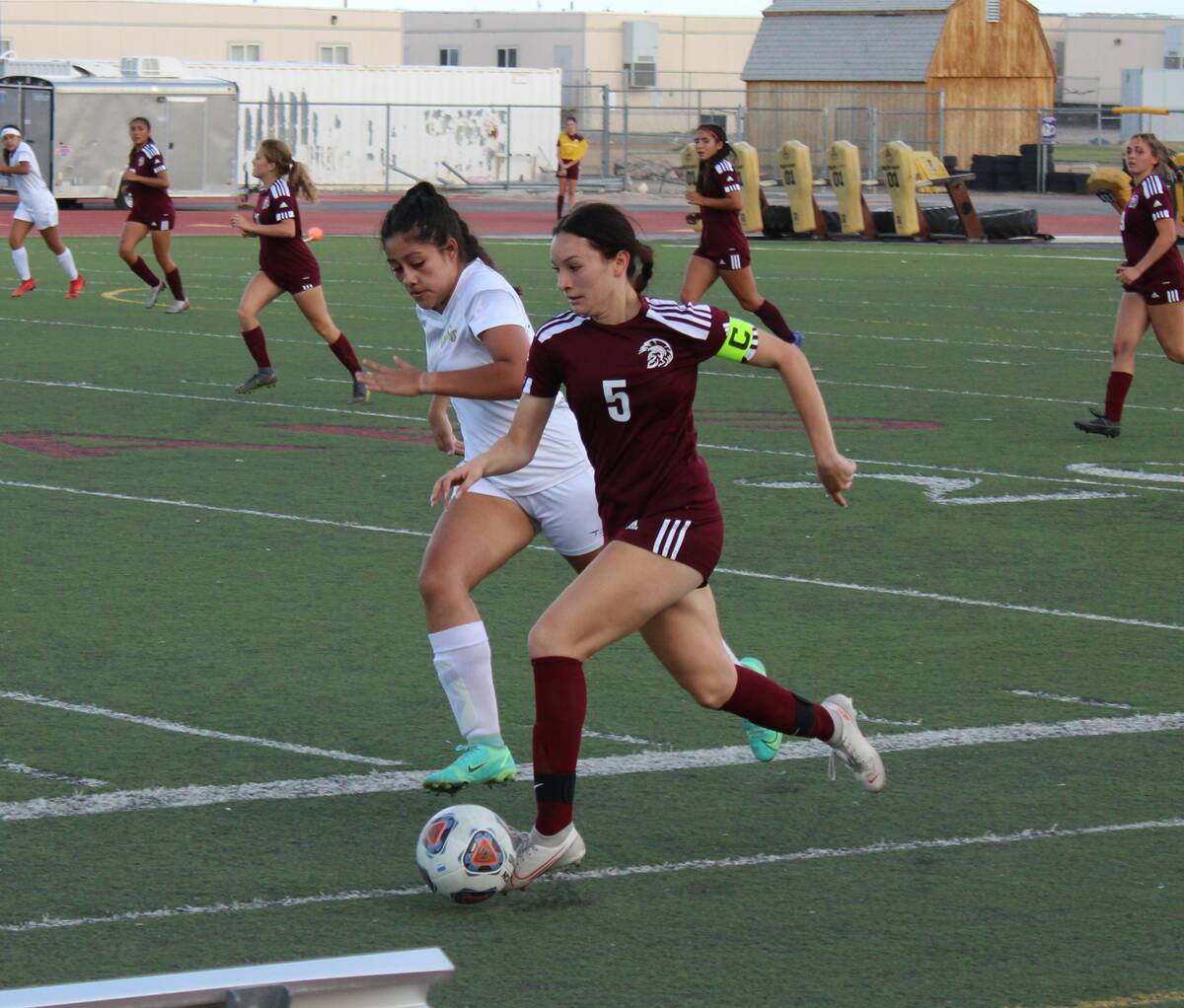 Danny Smyth/Pahrump Valley Times Pahrump Valley Trojans senior captain Adryanna Avena (5) dribbles down the sideline against a Virgin Valley defender in the Trojans' 1-0 win over the Bulldogs on Wednesday, Aug. 24. 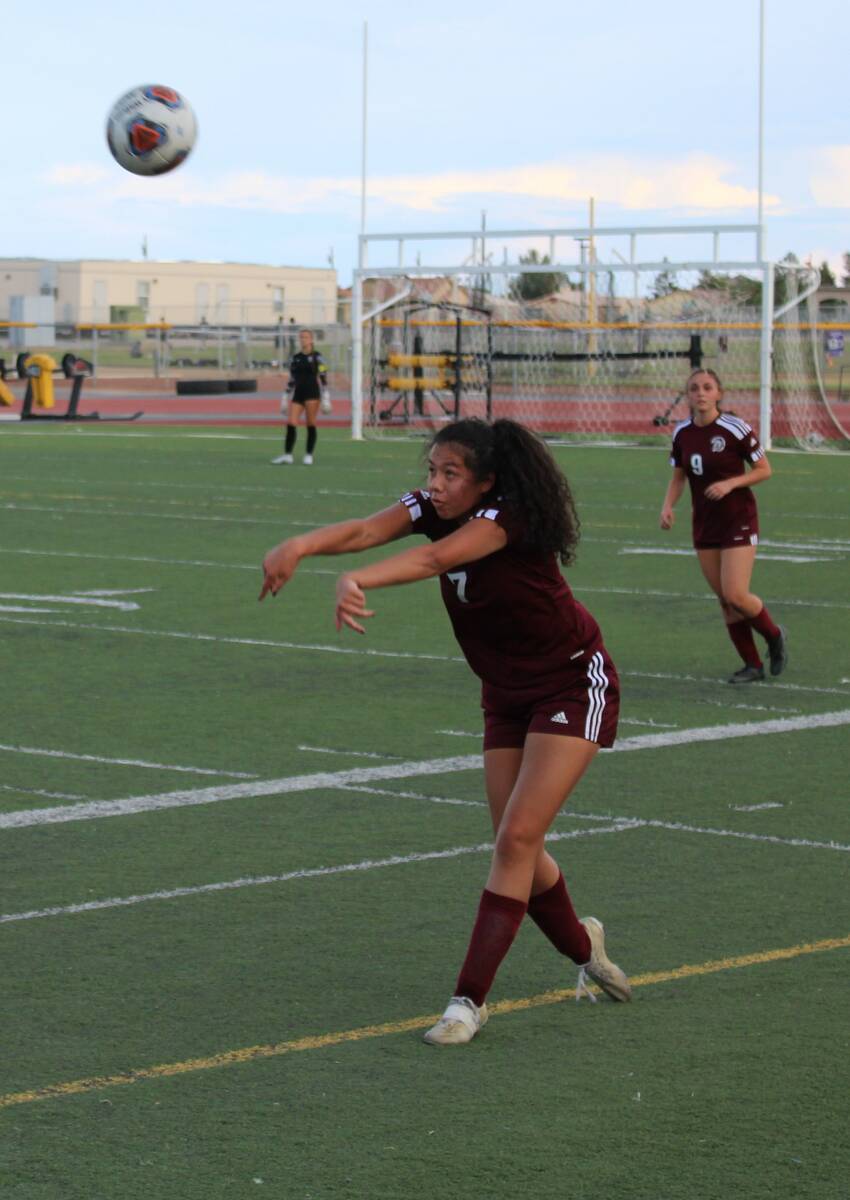 Danny Smyth/Pahrump Valley Times Senior defender Jessica Garcia (7) throws the ball in to one of her teammates during the Trojans' 1-0 win over Virgin Valley on Wednesday, Aug. 24. 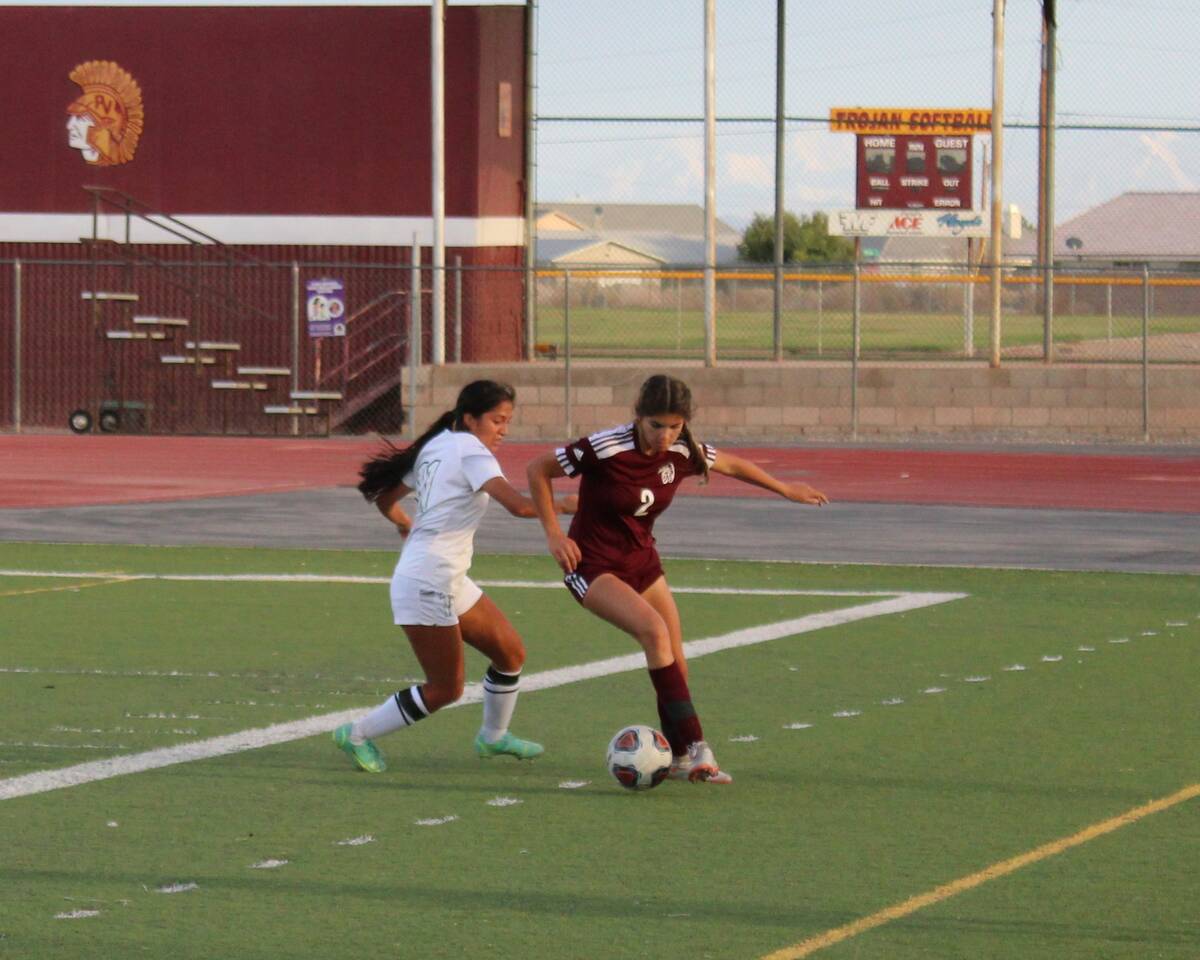 Danny Smyth/Pahrump Valley Times Junior forward Courtney VanHouse (2) fights for the ball against a Virgin Valley defender in the Trojans' 1-0 victory over the Bulldogs.

The season opened with a road game against the Faith Lutheran Crusaders on Monday night in Las Vegas.

This was the second consecutive year the Trojans opened their season against the Crusaders and the third straight year they have played.

Faith Lutheran has won all three matchups, however, after getting shut out in their first two games, the Trojans were able to find the back of the net.

Adryanna Avena scored the lone goal for Pahrump Valley on Monday in a 6-1 defeat to the Crusaders.

Avena is returning for her senior season this year after leading the state in scoring last season with 39 goals and 20 assists.

On Wednesday, the Lady Trojans hosted their first home game of the season in a matchup against Virgin Valley beating the Bulldogs 1-0.

Last year, Pahrump Valley won both games against Virgin Valley, including a 4-0 win in the regional tournament.

This game was much closer.

The Trojans were able to get on the board in the 14th minute thanks to a goal by Avena, which was assisted by junior forward Grace Miller.

Head coach Julie Carrington chalked up the struggles to being early in the season and the players needing to learn how to play with each other in-game.

The loss of last year’s captain, Kiara Ramos, could be seen in the team’s struggles at midfield.

Ramos was the loudest voice on the field during most games, helping make sure players were in the right position on offense and defense.

The team will be looking to veterans Gabrielle Kullmann and Kailani Martinez to be the voices in the middle this season.

The game went to halftime with a score of 1-0, but this was just the calm before the storm.

In the second half, players on both teams came out with some fire and some aggression.

As the game went on, players became tired and frustrated about missed calls all over the field. It also didn’t help that players were jawing back and forth.

But, hey, it’s sports, right? If there wasn’t yelling between players, how else would we be able to feel their passion?

As the second half went on, the game became chippy to the point where Carrington and the rest of the Pahrump Valley team were yelling for Bulldog players to get yellow cards on multiple occasions.

Nonetheless, neither team ended up getting any cards. However, both teams were talked to numerous times about their physical play.

Both teams had chances to get on the board late in the second half.

Avena put the ball in goal with about 10 minutes remaining, but the goal was waived off and she was called for offsides.

The call put a damper on what was a huge celebration by the Trojan bench.

With about 30 seconds left in the game, Virgin Valley had the ball inside Pahrump’s penalty box. After a short scrum for the ball, one of the Bulldog players was able to score a goal. But this too was waived off as Virgin Valley was called for offsides.

Shortly after the restart, the refs blew the whistle and brought an end to a very competitive game.

Pahrump Valley will hit the field again this Friday, Aug. 26, when they open up a tournament against the Elko Indians. The game is scheduled to start at 8 a.m.

This will be the first matchup between these two teams since they played to a 0-0 draw in the season opening tournament for the 2019 season.