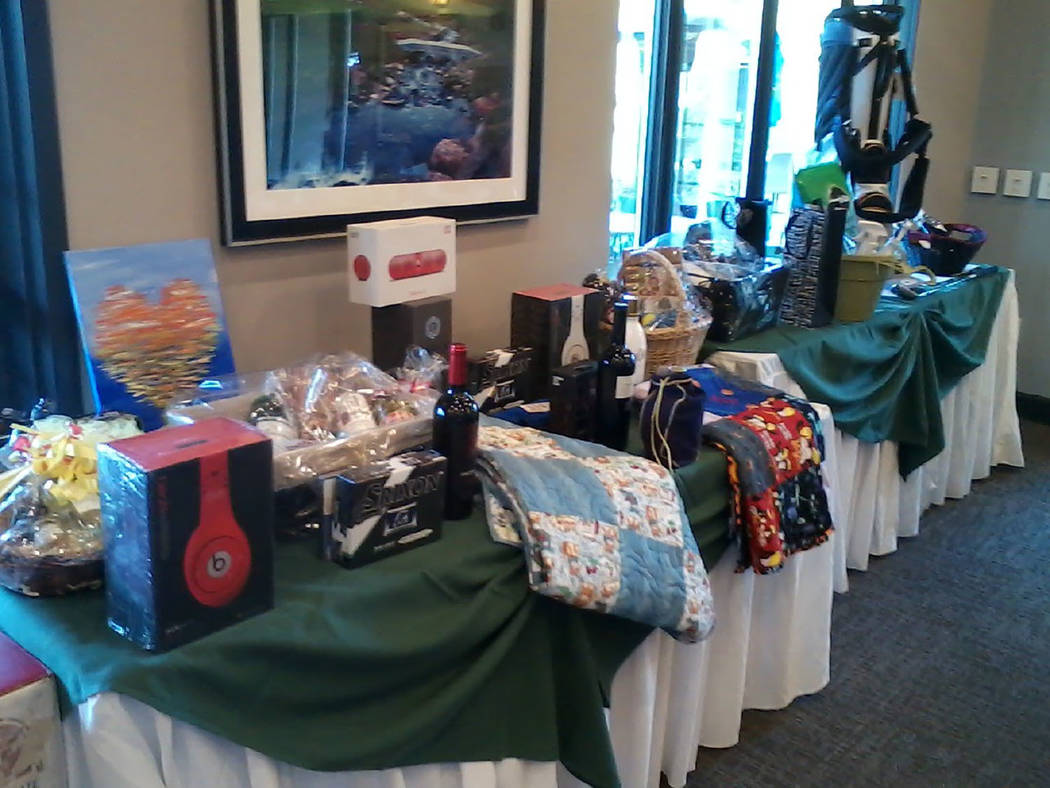 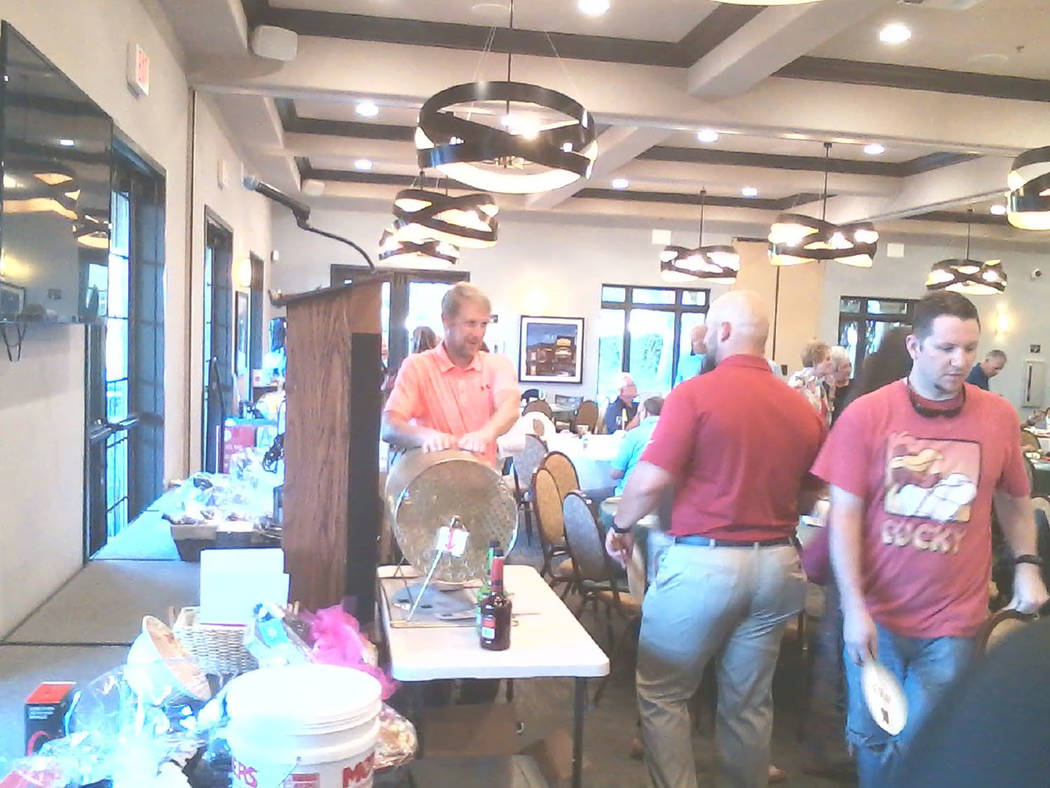 Tom Rysinski/Pahrump Valley Times Attendees drop ping pong balls into the hopper in hopes of winning one of the 160 prizes donated to the Quarter Auction to support youth golf programs in Pahrump. 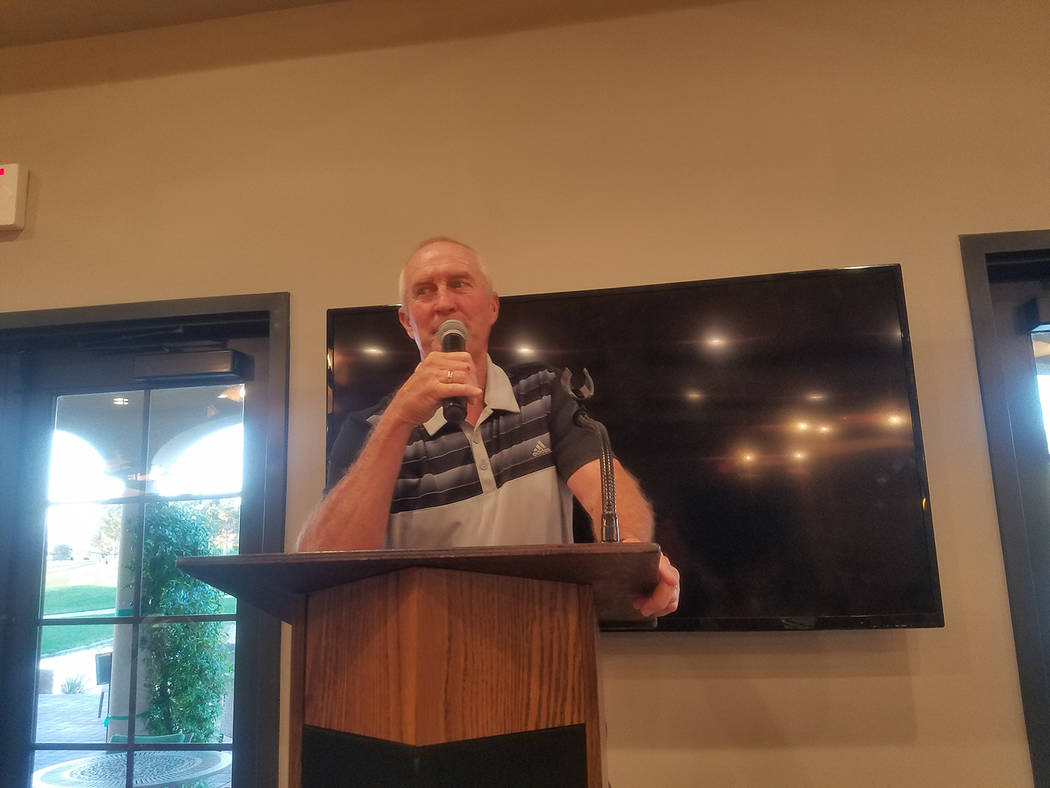 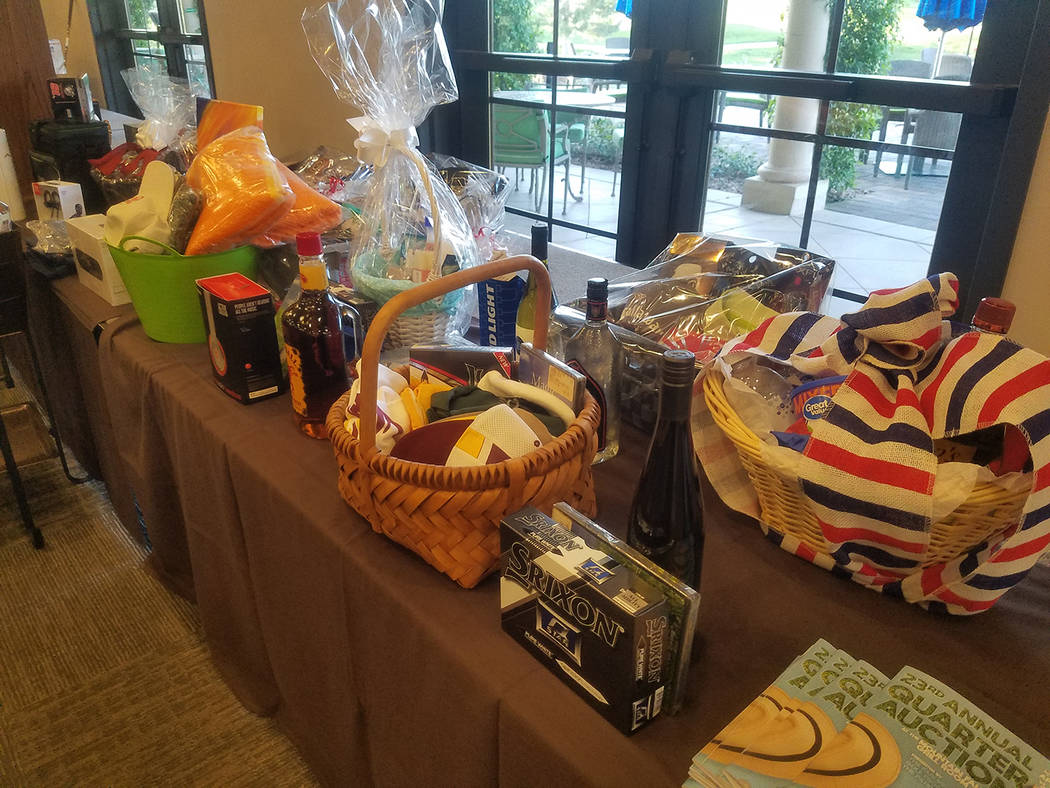 David Jacobs/Pahrump Valley Times A look at some of the items awarded at the Quarter Auction at Mountain Falls. More than 160 items were at the annual event. 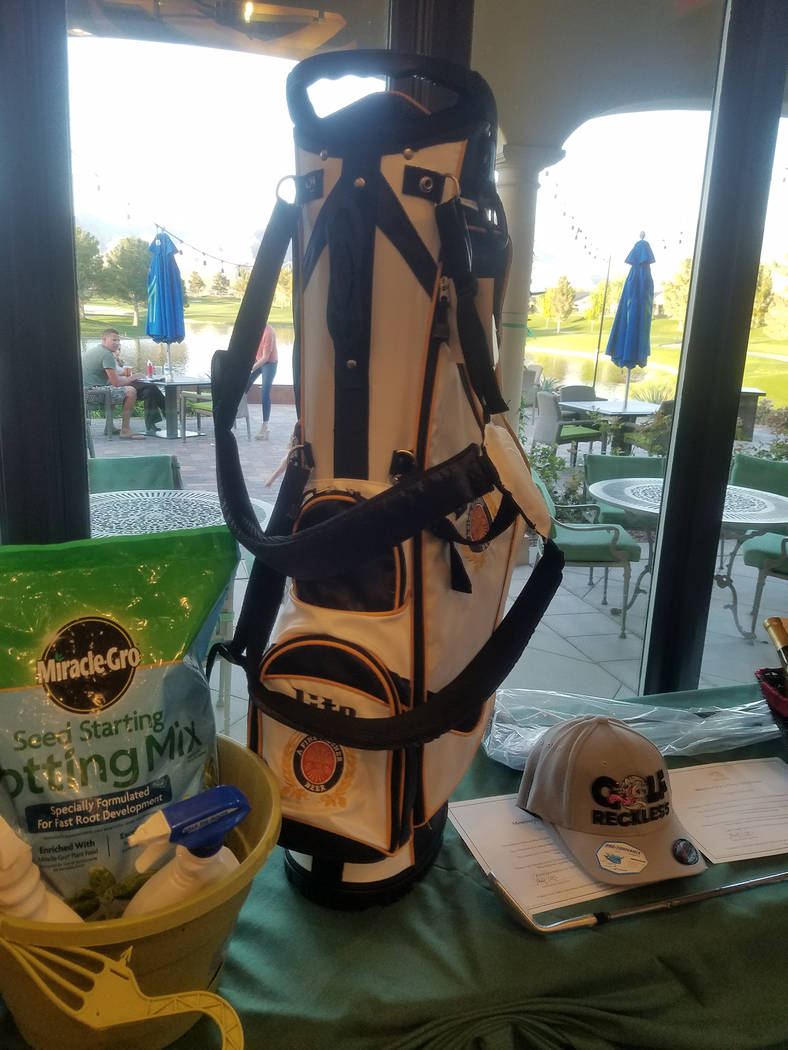 David Jacobs/Pahrump Valley Times A golf bag awarded at the Quarter Auction is displayed at Mountain Falls. It was one of the items available to win that night. 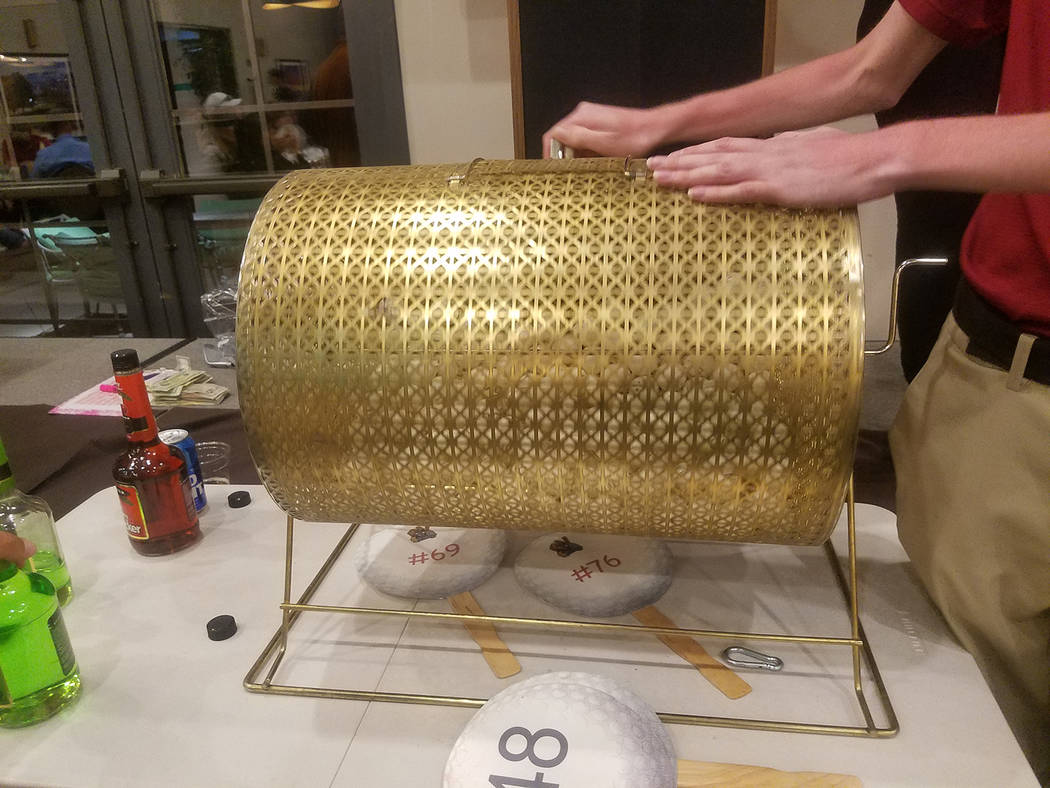 David Jacobs/Pahrump Valley Times The winning numbers on ping-pong balls were drawn from this canister that was spun prior to the individual drawings. The event was held at Mountain Falls Golf Club. 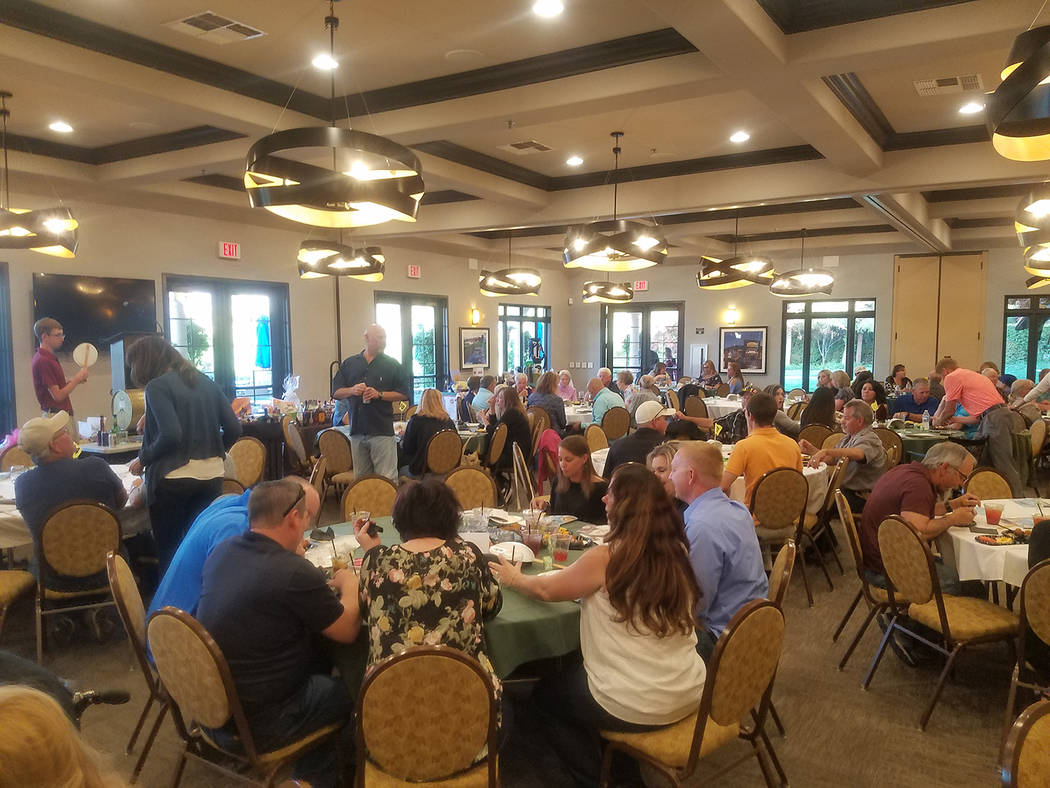 David Jacobs/Pahrump Valley Times The crowd gathers inside Mountain Falls as the Quarter Auction draws attracts a large crowd within the Pahrump community.

An overflow crowd cheered every winning ball drawn for almost three hours Saturday night at Mountain Falls Golf Club, and it was music to the ears of Sarah Hopkins.

”I think it went pretty well,” Hopkins said of the event in the Grill Room at Mountain Falls. “We ended up with a few more people than we anticipated, but the golf course had extra tables set up, so it worked really well.”

The event has a soft capacity of 200, but the bar area was opened up to accommodate the overflow crowd.

“We went beyond the 200 that we anticipated,” Hopkins said.

Youth golf programs in Pahrump will benefit from the more than 200 people buying $60 tickets, said Bob Hopkins, Sarah’s husband, another executive board member of the founders club and the golf coach at Pahrump Valley High School.

“We have a $5,000 scholarship which goes to one of our graduating senior golfers, and sometimes we have two or three of them that apply and we’ll go with the $5,000 and $1,000 here and $1,000 there,” Bob Hopkins said. “If I need golf bags at the school or golf equipment at the middle school or the high school or for our junior golf, whatever they need, we use this money for that.”

This year’s scholarship winner will be announced in May, he said.

Attendees were given a ping pong ball and a paddle. The balls were placed into a hopper, winners were selected for 160 prizes. Prizes ranged from gift certificates and bottles of alcohol to elaborate gift baskets and, naturally, rounds of golf. And rounds of golf enabled the founders club to raise a little extra money.

“When they put those golf courses in the program, we normally get only one certificate (for a round) from them,” Sarah Hopkins explained. “This year, they donated two certificates from each course. So there were extras, and they said just auction them off, and that’s what we did.”

Auctioning off rounds of golf at Southern Nevada courses brought in several hundred dollars on top of the ticket sales and the 50-50 drawing, which was worth more than $500.

“The scholarship is in great hands, and auctioning off the extra prizes, that also helped, too,” Sarah Hopkins said.

Each winning ball was placed back into the hopper, allowing the same person to win multiple prizes. When Bob Hopkins noticed the same number popping up more than once, he jokingly chastised Zach Harris, the 2013 scholarship winner, who was pulling the numbers for much of the evening.

“Zach, you’ve got to dig a little deeper,” he said.

Enthusiasm was high from the beginning and only grew greater as the event went on. A winner of anything from a 60-minute massage to $500 toward the purchase of a travel trailer or fifth-wheeler brought cheers and squeals of delight from the winner’s table, and those who won cash were brought a shot of schnapps to celebrate.

“We’ve got sour apple and cherry,” Bob Hopkins told the crowd. “The watermelon last year got a little sticky.”

The 160 prizes donated by local businesses and individuals showed just how much the community backs the Quarter Auction and Pahrump youth golf, Sarah Hopkins said.

“The community supports this program very well, for which we’re very grateful,” she said. “And you could see from the crowd here, too, how much they support it.”

And Bob Hopkins singled out their hosts for their support as well. After thanking the evening’s sponsors and attendees, he also thanked “Mountain Falls, because they do so much for our kids.”

Almost three hours after Bob Hopkins announced the first number, the 160th and final prize in the program, a round of golf for four at Dragon Ridge Country Club in Henderson, was awarded. The exuberant crowd slowly filtered out, leaving Sarah Hopkins to collect the special golf ball centerpieces before getting down to the business of tallying the night’s proceeds.

“I think it ran great,” Bob Hopkins said. “Everybody had a good time, which is what it’s all about.”