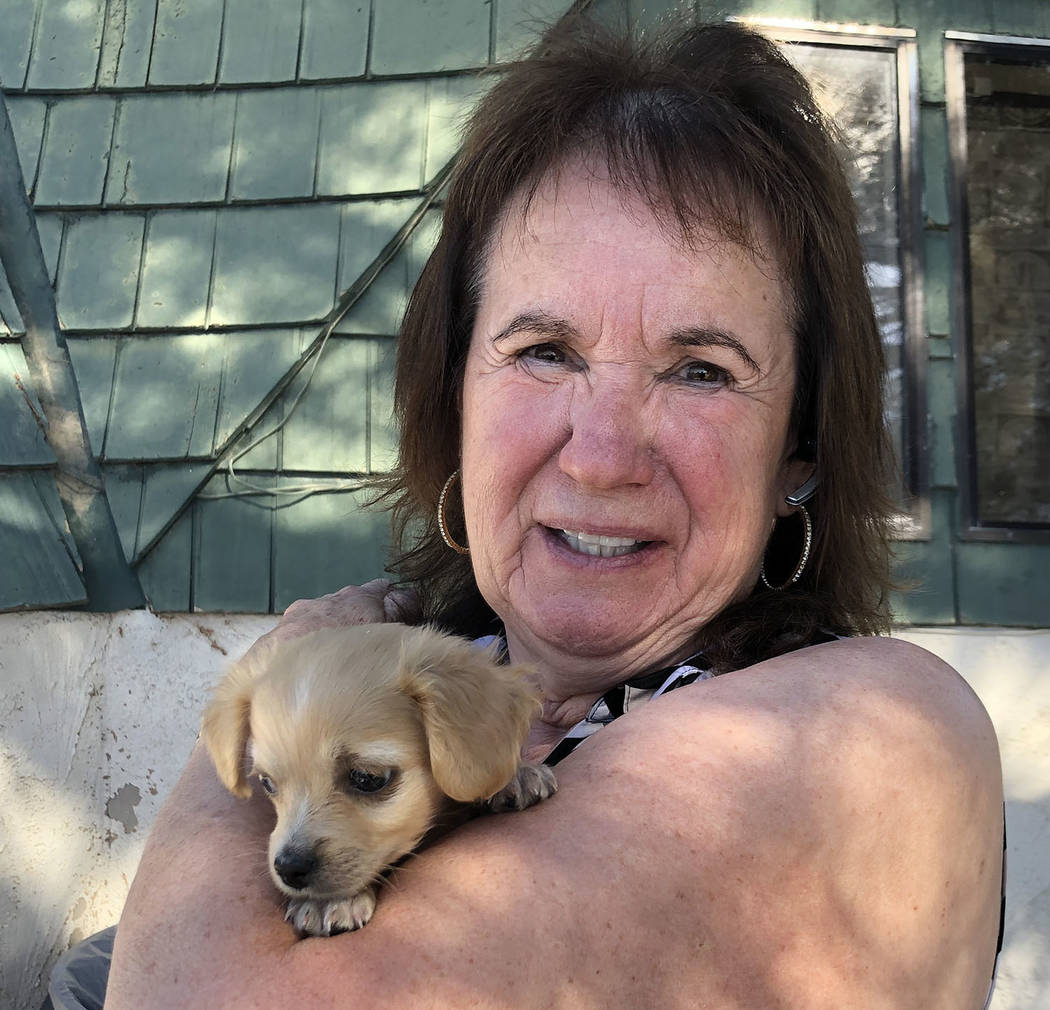 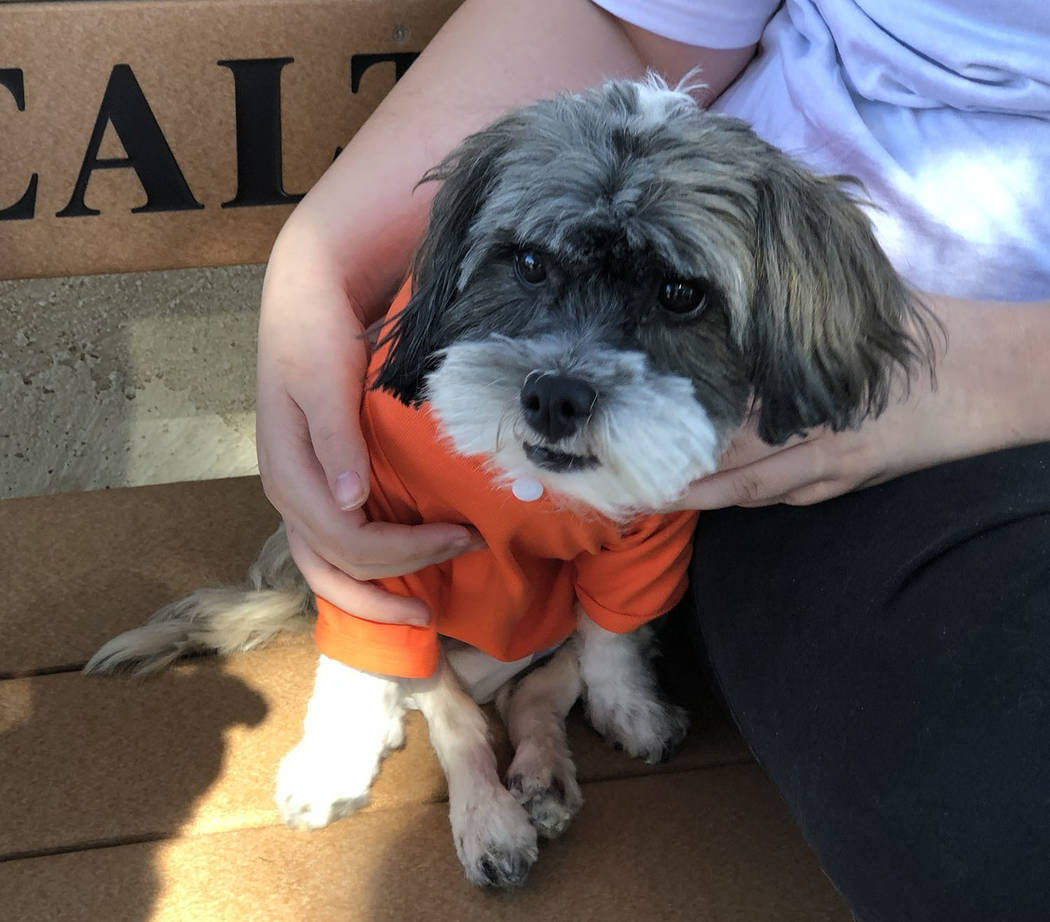 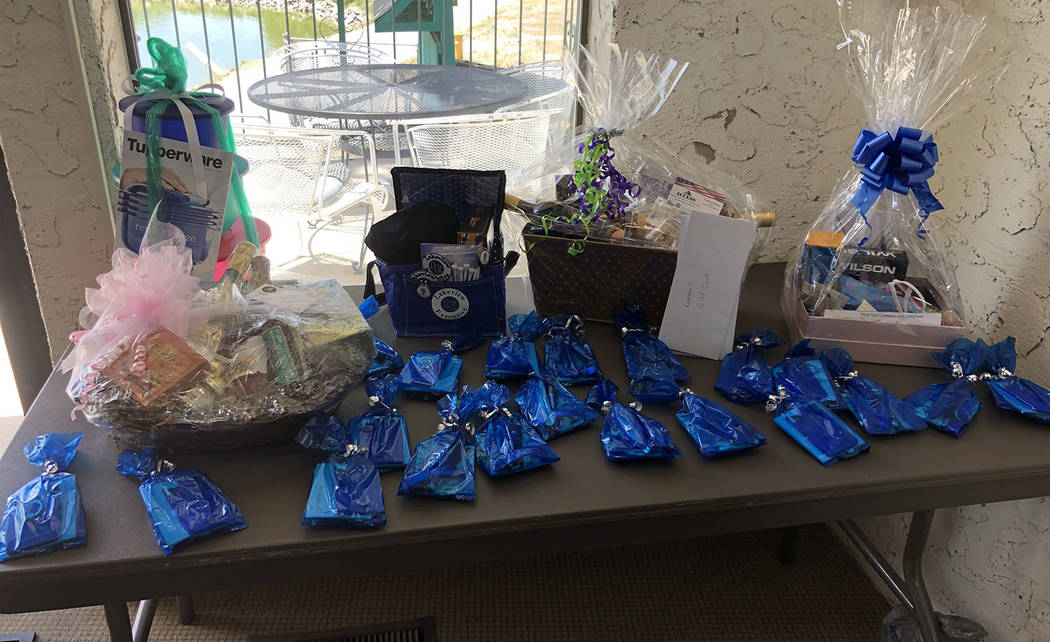 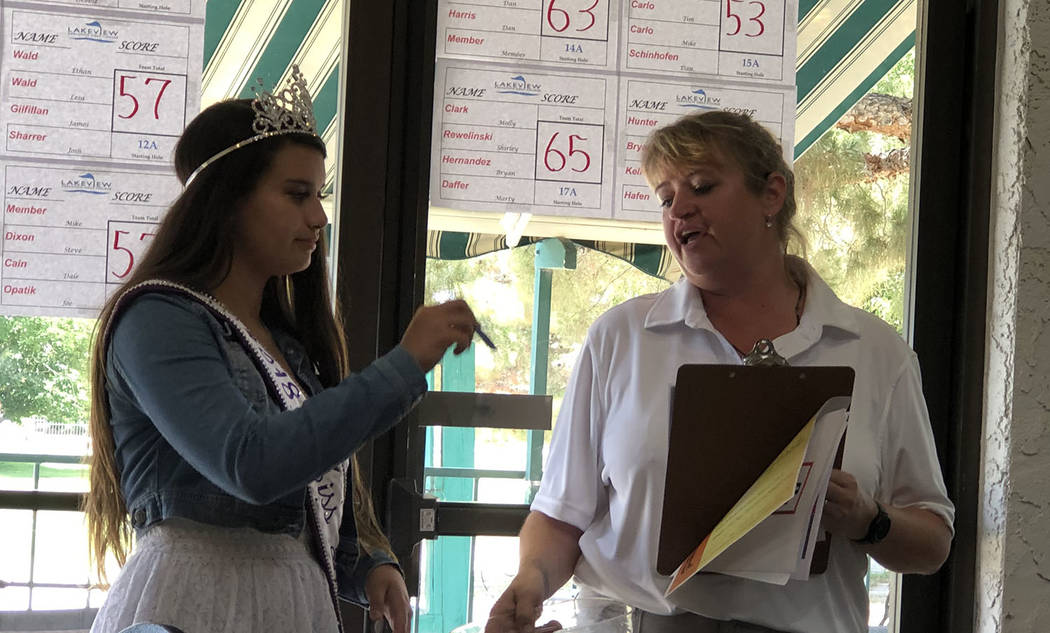 Before 40 golfers headed out in their carts Wednesday morning at Lakeview Executive Golf Course, they were introduced to two of the reasons why they were there.

There was Petunia, thought to be part-Chihuahua and part-dachshund, who was surrendered by a woman who got her from a neighbor who could not take care of her, said Pat Leming, executive director of Never Forgotten Animal Society.

And there was Charlie, a dog with sores on his legs and wearing a diaper, who had faced a bleak future.

“He was going to be euthanized,” Leming said. “He’s five years old. That’s not right. It’s highly expensive to take care of a special-needs animal, but you can’t turn your back. At least we can’t.”

Holding Petunia and Charlie for the golfers to fall in love with were Connie Alston and Sabrina Paskvan. Paskvan, who is from Pahrump, is Never Forgotten’s “cattery supervisor” — “I just got that job yesterday” — and Leming said the big promotion came with a pay hike from “zero to zero.”

Alston, a retired chef from New York who has lived in Maryland and California, was looking for something to do with her time. “I figured it would be about 15 hours a week, but it’s more like 50,” she said.

That’s the kind of dedication everyone connected with the group seems to have. Never Forgotten Animal Society is a relative newcomer in Pahrump, formed last November, largely by people who previously had worked for Desert Haven Animal Society.

“We went ahead and formed a group that would take over the shelter and run it the way it was supposed to be run,” Leming said. “All of our animals, when they go out, are spay-neutered, and all of our animals have their vaccinations at no additional cost to the adopters.”

But the money has to come from somewhere, and the idea of a golf event came from that need. Most of the golfers represented real estate agencies in Pahrump, and getting them on board happened quickly.

“We started three weeks ago on a fluke, and we all got on the phone and starting calling people,” said Sheryl Hunter of Classic Realty Group, the vice president of the Pahrump Real Estate Advisory Council and organizer of the golf scramble. “We wanted a great way to get the local Realtors involved and put us together for something other than a stuffy old meeting.”

Hunter said she did some volunteer work for Never Forgotten — there are no employees, everyone at the society is a volunteer — and that one of the connections between Pahrump’s real estate agents and animal welfare is Molly Clark, a full-time teacher, part-time real estate agent and new grandmother.

“I just have a lot of energy, and my kids and I have always been driven to rescue and re-home,” said Clark, like Hunter part of Classic Realty Group and Never Forgotten’s president. “Between my kids and I we have probably rescued and re-homed more than 40 animals in the past 12 years.”

Clark has conducted a program for the past two years in local schools called Pet Awareness, teaching kids about being responsible pet owners.

“We came together from the shelter and realized there was another opportunity to form an organization that could specifically concentrate on education and awareness in the community,” Clark said. “Now we have the nonprofit and we’re doing rescuing, re-homing and adoption services.

“We have created a system where we have taken hundreds of cats out of Pahrump and taken them to Reno where they have mandatory spay and neuter. We have saved two hoarding situations.”

Leming is justifiably proud of the numbers Never Forgotten Animal Society has achieved in its short life.

“In seven months, we’ve done over 300 adoption and almost 30 spay-neuters for the community for free,” she said. “We’re all very motivated, and we understand the need in the community.”

Golfers who paid $25 each to participate in the scramble learned a bit about Never Forgotten after the scramble, as Hunter outlined some of the group’s goals and purposes before giving out the awards.

The top team in the scramble was entered by Nevada Realty — which always seems to do well in charity golf events around Pahrump — as Tony Carlo, Tim Carlo, Mike Carlo and Kelly Swanson teamed for a 53, 4 shots better than their nearest competition.

At the other end of the scale, the last-place “prize” was won by Mike Colucci, Andra Braden, Walt Turner and Chris Shipley, who carded a 69. A smiling Hunter announced they won a voucher for a pitcher of beer to drown their sorrows, a box of tissues and the phone number of Will Peers, general manager at Lakeview, for golf lessons.

Hunter said the real estate community benefited from the event by getting people together in an informal environment, saying that being around a golf course was a great way to network and keep their business lives friendly. “It doesn’t have to be contentious,” she said.

“We have four golfers participating in the event today,” said Shosana Carro, senior vice president and state manager at Old Republic Title, which just opened an office in Pahrump four weeks ago. “We thought it would be a good opportunity to come and introduce ourselves to the local community and let them know that we’re here.”

Carol Grabner of Access Realty said it was easy to get people involved in helping Never Forgotten.

“We have a monthly meeting and all the Realtors are invited and we go over all kinds of things that are going on in the valley,” she explained. “This was brought up for a fundraiser, and that was it. Sheryl at the meeting asked for raffle baskets, and two of my girlfriends generously donated. One’s from Tupperware, one’s from Mary Kay. And I did a basket.”

“I’ve given out a lot of trophies and done grand openings and had a lot of fun with everyone,” Carreon said of her Miss Pahrump duties, which will end this weekend when this year’s pageant takes place. She also has an interest in animal welfare. “I had a donation drive on Saturday and raised a bunch of money for pet supplies. I’m going to be distributing it soon.”

There is little time for Never Forgotten Animal Society’s board to savor the success of the golf scramble.

“We have over 40 animals this weekend at Tractor Supply for a free adoption event,” Leming said. “The people that adopt the animals do not have to pay any adoption fees; they’ve all been waived. We have a foundation here in Nevada called Maddie’s Fund, which is paying us $200 per animal to help us clear out our inventories and help support shelters. Every dollar we receive is going 100 percent to the animals.

“The Tractor Supply event this Friday and Saturday is our way of generating enough income to try and keep our doors open for the rest of the year. Our goal is 30 or more. A shelter environment is a holy hell for animals, and we’re trying to keep them out of there as much as we can.”

The adoption event runs from 9 a.m. to 4 p.m. both days. For more information on Never Forgotten Animal Society, visit neverforgottenanimalsociety.com or call 775-537-8674.